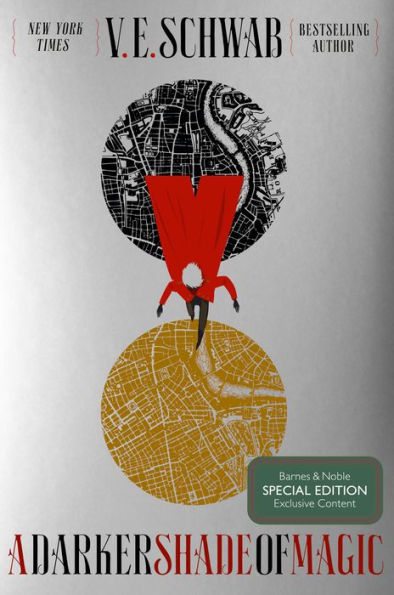 A Darker Shade of Magic – Special Edition from Barnes & Noble.

I first read V.E. Schwab’s A Darker Shade of Magic back in 2015. I was blown away. It’s a tale of four parallel-world versions of London–Gray, Red, White, and Black–and Kell, one of the last Antari, special sorcerers who can travel between them using magic. Kell carries messages between the rulers of the Londons, and while his allegiance is to Red London, he’s also got a side job that involves smuggling. When Kell obtains a relic from the forbidden Black London, he finds himself hunted and hiding in Gray London, where he crosses path with a young thief named Delilah Bard. Adventure ensues… enough to fill two more books after this one.

The reason I’m telling you about this two-year-old book is that a collector’s edition has just been released with exclusive content, sold only at Barnes & Noble. First, the collector edition is signed by V.E. herself. The front and back end papers are filled with fan art showing various characters and objects from the tale. There’s a glossary in the back of the book that explains the Antari magical terms, number system, and popular phrases as well as a guide to the “Best of” places in Red London. Add to that four short stories and an interview with the author and her editor. Oh, and, of course, the story is there in its original form, with an included velvet ribbon bookmark.

If you missed the book, now’s your chance to catch it again, with all the bonus material and an author signature to boot.

GeekDad Puzzle of the Week: The Dugong Reunion