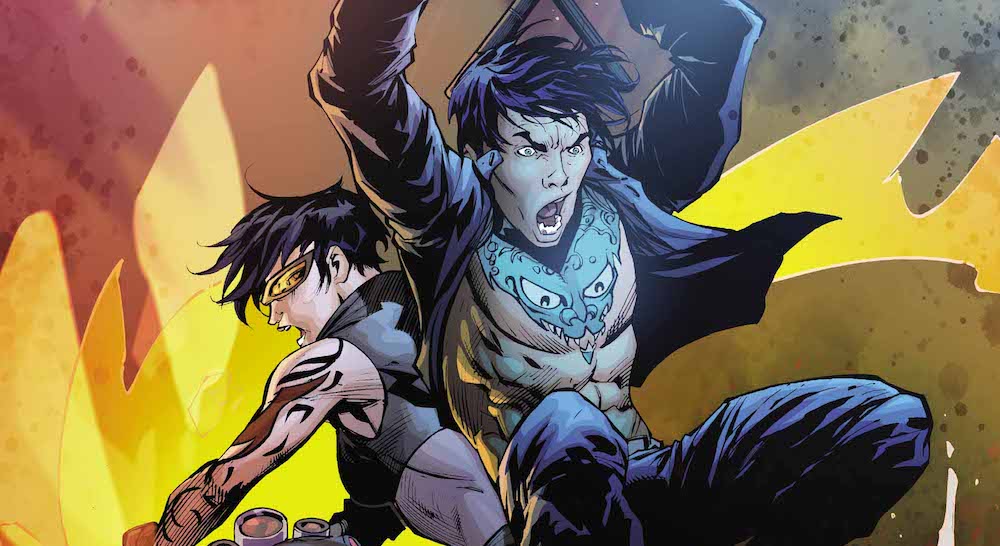 Ray: This series jumps around a lot, introducing new characters and adding to its world. That keeps it fresh with every issue, yes – but it also makes it a bit jarring, given that there’s little continuity between issues. It seems so far that Kara Gordon is going to be the only real uniting factor between the narratives, so the quality tends to vary. This issue, still a young pledge to the gang at the Garage, she meets with two free agents – the former Robin, now known as Nightwing, who is a charismatic biker rogue, and the talented thief known only as Catwoman. This take on Catwoman seems familiar, but as the issue wears on, it’s clear she’s anything but. Not just a simple thief, she’s a high-level saboteur against Luthor’s regime.

The issue takes them deep into the core of Luthor’s tech center, where it becomes clear that this Luthor may actually be far more evil than any we’ve seen before. He’s got a “brain center” that consists of the harvested brains of the only people who could rival his intellect, and he uses it to power his security system. He keeps his soldiers alive by harvesting organs from one of his prisoners – Victor Stone, aka Cyborg, whose role in this issue is the most affecting scene and a briefer stay than I expected. There’s a pretty solid twist in the endgame, revealing that this Catwoman is a very different version who may be playing both sides, but the core of the character remains intact. I’m still not 100% sold on this series, but I am intrigued the more we find out about it.

Corrina: I had thought from the first few issues that this series was going to concentrate on a rebellion against Luthor. If that’s true, it’s going to take its time, because each issue only touches in small part on that overall arc, such as the ending to this tale involving Luthor where it’s unclear exactly who Selina might be working for.

My guess is herself because, generally, the core of Selina is that she’s cynical about people and about whether doing the right thing will ever make any difference. That’s what makes her such an intriguing match for Bruce because she does care about him, and thus has to rethink her worldview because if he believes in justice that much, maybe there’s something to it. But, absent Bruce, we get Selina here in a great caper story with some great twists and turns. I’m less enthused by this new version of Nightwing, who is more like Jason Todd than Dick Grayson. However, the segments with Vic Stone carried unexpected weight and added a new depth to the story.

But I would like to see the overall story go forward faster.

Note: to read all our single issue reviews of DC Comics, check out our index.