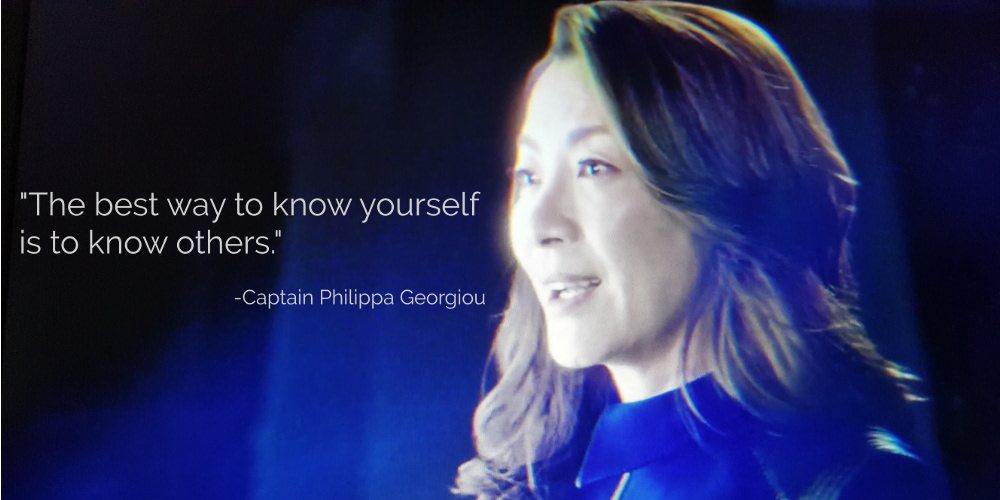 Welcome back to another week where we recap, react to, and ruminate about Star Trek: Discovery Episode 4: “The Butcher’s Knife Cares Not for the Lamb’s Cry.” This post will contain mild spoilers, so don’t read ahead until you have watched episode four.

As with previous posts in this Star Trek: Discovery series, there won’t be a lengthy recap, but instead of we will focus on the basic of what we learn. As always, I’ll be pulling reactions and ruminations from my Star Trek community.

Episode four was busy. Not in in the way of action sequences but rather in the way of story. Distilling it down to the basic of what we learn will be no easy task, but here we go.

Not only is Lorca’s sense of morality questionable and his ego enormous, we learn this includes that he’s not opposed to lying to Starfleet admirals. Corvan 2 — a mining colony that produces 40 percent of the Federation’s dilithium — is under attack by the Klingons. Ships with standard warp technology cannot make it to Corvan 2 within the six-hour window, so Starfleet asked Lorca if Discovery‘s spore drive is ready. His answer was “yes” but the reality was a “no” and this causes a conflict between Lorca and Stamets.

Burnham is tasked with weaponizing the space tardigrade. Lorca thinks he has her all figured out and presents this task as an opportunity for redemption. However, we know that Burnham is not interested in redemption. Instead of going to work on weaponization, she wants to learn what motivates the tardigrade. As we learned in episode three, she does not take things at face value.

Landry is unquestionably loyal to Captain Lorca. Burnham tries to convince Landry of the importance of learning about the tardigrade, using Vulcan philosophy in the process. Landry does not take to kindly to Vulcan philosophies and decides to take the mission of the weaponization of the tardigrade she named “Ripper” into her own hands. Her undying devotion to a questionable captain costs Landry her life.

We are also introduced to Dr. Hugh Culber, who is Stamets’ partner. Star Trek: Discovery has yet to explicitly state this, but the banter in sickbay between the two was refreshing and a nice injection of humor into a heavy episode.

Suru is not happy about Burnham’s presence on Discovery. He becomes even more displeased when Burnham uses him to test a theory about whether the tardigrade is a malicious creature or if it reacted as it did on the Glenn because it felt under threat. Eventually we learn that the tardigrade is a sentient creature that makes the spore drive technology functional.

Meanwhile, the Klingons are having a tough go of things. It’s been six months since the battle at the binary stars. They are starving and without the ability to power the new cloaking technology. Continuing inter-house conflicts lead to Voq being exiled and left to die on the Shenzhou. L’Rell proposed exile over death. She eventually joined Voq with an offer to regain power and it will only cost him “everything.”

The relationship between Tilly and Burnham is continuing to grow. Tilly has gone from being leery of Burnham to looking upon her with awe and wonder. You can tell that Burnham feels undeserving of Tilly’s admiration and respect. But through Tilly, Burnham gains strength. This relationship is one filled with mutual empowerment.

Captain Georgiou left Burhnam with her last will and testament. She leaves Burnham with words of wisdom about the duty of care.

There was a lot to react to in this episode. Once again, the reactions from within my Star Trek community were mostly positive.

There are a few people, including myself, who continue to dislike the idea of possible Section 31 involvement, but we are willing to see how they deal with it this time. There is speculation that Lorca is going to join Landry in the land of the dead before Discovery is over, maybe at the end of the season? With the introduction of many morality issues this episode, more and more long-time Star Trek fans are finally convinced that Star Trek: Discovery is real Star Trek.

As mentioned in last week’s post about “Context Is for Kings,” fans are being impatient after so many years without good Star Trek. It’s interesting to me to watch this, as well as seeing people’s reactions when they are reminded that the first season of most Star Trek series were not good. But fans are hungry. I think the good dump of a variety of morality issues in episode four will satiate people enough to allow the threads of the larger arc to slowly and methodically weave themselves.

On a personal note, I’m enjoying the continued trend of showing and not telling. It is in this area that a long arc is so very nice, saving us from Captain’s Logs filled with exposition.

One person made this astute note:

I like that they introduced the reason why this engine tech will never goes mainstream (it requires enslaving and torturing an intelligent species).

The “showing not telling” also gives the writers opportunities for richer character development instead of dumping backstory into narrated logs. As Landry is credited as appearing in 11 episodes, it will be interesting to see how they make use of flashbacks instead of logs to tell backstory. Flashback, like story arcs, can be a double-edged sword.

While overall reaction continues to be positive, with some nitpicking about window dressing, there is one thing that did not work for viewers this week: The Klingon subtitles. When we first learned that Klingons would be speaking Klingon with English subtitles, most people thought this was a very cool idea. It worked in the first two episodes. However, the overwhelming consensus this week is that they went by too quickly, causing viewers to miss portions of dialogue. This is compounded with the fact that the white text and font family choice is difficult to read, slowing the viewer’s ability to read.

Once again, there is a lot to digest in episode four of Star Trek: Discovery. As before, we will continue our ruminations while we keep the discussion points about Burnham and Federation imperialism from episode one and two, and all the times the Federation was not good from our discussions of episode three.

This week, I want to focus more specifically on Captain Lorca and his requirement for unquestioning loyalty and the consequences; blindly following orders version challenging them.

This isn’t the first time we’ve met a Starfleet captain we didn’t like and who expected unquestioning loyalty. Remember Captain Jellico and his conflict with Riker? The difference is, while Jellico was a hardass, he believed in absolutes, something Lorca has said is for lackeys.

While the structure of Starfleet isn’t completely modelled on military structure, it does borrow a lot from it. This borrowing includes training on questioning and disobeying unlawful orders. I’m willing to bet a couple bars of gold-pressed latinum that not only has Lorca given such orders in the past, he will give them again in the future.

Landry had no qualms about following Lorca’s questionable orders. It cost her. Stamets attempted to question Lorca. In response, Lorca demeans Stamets on a very personal level:

How do you want to be remembered in history? Alongside the Wright brothers, Elon Musk, Zefram Cochrane? Or as a failed fungus expert?

Lorca will attack a person’s sense of self-worth, while also leaving them to feel powerless, as he did when he reminded Stamets that his science does not belong to him and Lorca will manipulate it however he sees fit. Even if Stamets resigns, Lorca still controls his work and can find someone to replace him.

We’ve also watched other captains dress down their officers but never on such a personal level. Lorca is manipulative.

This brings us to Burnham. We (the viewers) know that she will question orders. She will do whatever she thinks is necessary to save her crew, including munity against someone she holds very dearly. She also doesn’t accept things at face value.

Lorca also knows this about her and yet, he manipulated situations to get her on the ship. Also, he is attempting to manipulate her by playing on her guilt over the fate of the Shenzhou. There will undoubtedly be a time where Lorca and Burnham come to blows.

But the question is why would someone like Lorca bring someone like Burnham onboard? When I posed this question to the community, the following exchange occurred between Gray Brothers and me:

GB: Lorca seems content to roll the dice on Burnham’s past experiences with the Klingons, and sense of personal vendetta, to trump any hesitation regarding how the war should be fought, and ultimately won. I mean, you can’t blame him. She was willing to flush decades of Vulcan training/indoctrination and seven years of Starfleet experience down the drain to fire first on the Klingons. If you look at it that way, he’s smart to play those odds. That’s why he keeps telling her how well he “knows” her. I think the realization that he might not will come as a shock.

Me: Very possible. Especially if he views her actions as the result of a personal vendetta. And this is another thing to discuss, which I wrote about in my first post and also ties to the history in ENT. I don’t think it was personal vendetta at all. But rather a mix of having knowledge that others did not about the Klingons and Vulcan encounters mixed with fight response from PTSD. In that moment, all she cared about was protecting her crewmates.

GB: Totally agree. I also don’t understand why everyone keeps blaming the war on Burnham. If it was for pushing the Torchbearer into his bat’leth, okay. But everything that happened when things escalated happened well after she’d been escorted off the bridge. Georgiou hailed, they opened fire. The Admiral hailed to sue for peace, they fired again. And would have NO MATTER WHAT. Donatu V should’ve been all the proof they needed there. So, I guess this is a commentary on the need to pin the blame on someone, ANYONE, rather than face the possibility a situation is hopeless and will unfold a certain way no matter what. We’ve all done it. Even when you know you’re dead wrong, it’s still easier to point the finger at someone else than to examine what might be your own fault.

Me: Yup. It was a Kobayashi Maru. The Klingons are bent on war with the Federation and it’s been brewing for a long time. And the Federation is naive enough to think that all the years of no contact can erase what happened when Starfleet was young.

While discussing this episode with my partner, he also stressed Lorca’s ego. Lorca thinks he can control Burnham, despite all the evidence to the contrary. After all, he has managed to manipulate everyone else by finding and exploiting areas of self-esteem that are vulnerable.

Until next Wednesday, Live Long and Prosper.