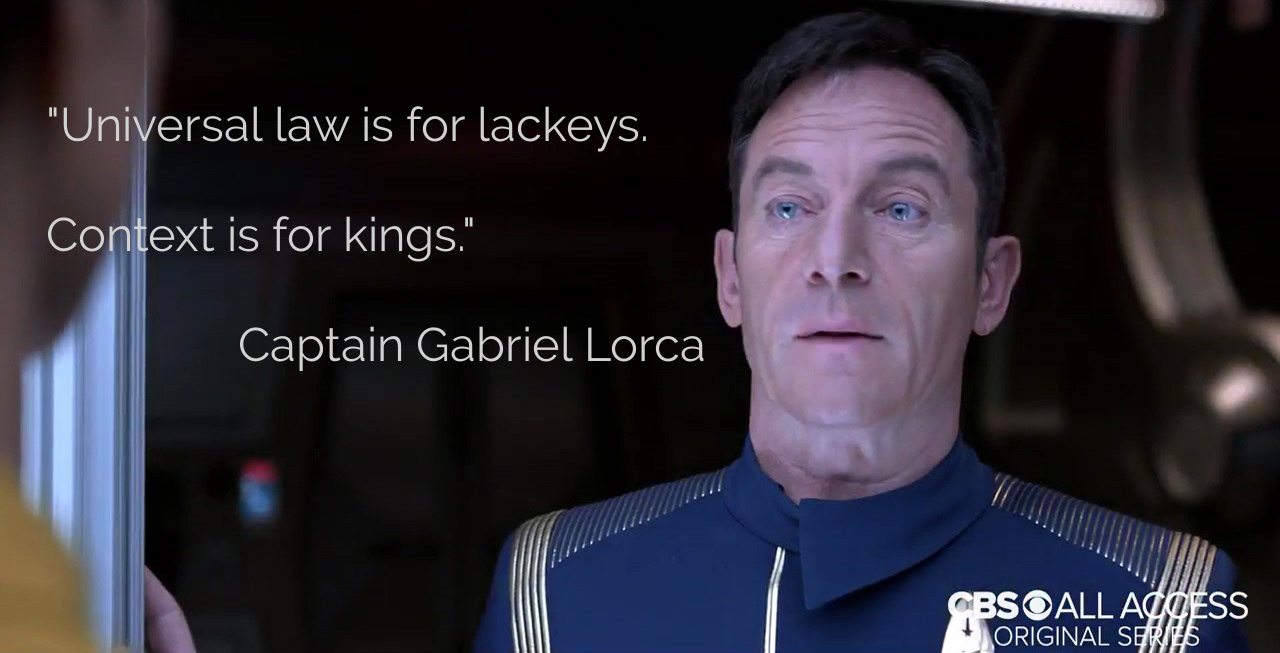 We are back to recap, react to, and ruminate about episode three of Star Trek: Discovery “Context Is for Kings”. This post will contain mild spoilers, so don’t read ahead until you have watched episode three.

Like the first post in this Star Trek: Discovery series, this post won’t be containing a lengthy recap, but instead focus on the basics of what we learn. Once again, I’ll be pulling reactions and ruminations from my Star Trek community, as well as adding my own.

In episode three, we learn quite a bit. We learn that Burnham is someone who takes full responsibility for her actions. We are introduced to Cadet Sylvia Tilly, Lieutenant Paul Stamets, Commander Elland Landry, and Captain Gabriel Lorca.

We are also introduced to many things that immediately caused discomfort for viewers. There are two science vessels that are running 300 secret experiments. At first, we are led to think one of those experiments is a weapon of mass destruction, but it turns out to be technology that can instantaneously transport someone to any place. We also see a lot of black insignia on the ship, which is leaving many to speculate about Section 31’s involvement.

We also learn that Burnham won’t sell her beliefs to gain freedom, while Lorca — like many captains and Starfleet officers before and after him — believes, “Universal law is for lackeys. Context is for kings,” right before he orders that a dangerous creature be brought onboard.

It has also become apparent that if viewers haven’t watched Enterprise, they will be missing a lot of history and context. There have been both subtle and overt references to events that happened in Enterprise.

“Context Is for Kings” Reactions

While the overall reaction to the first two episodes was good, the reaction to “Context Is for Kings” was great. I’ve seen many reactions that mirror the following reaction from within my Star Trek community:

If they had started with episode 3 and done episodes 1-2 as flashbacks, there wouldn’t be quite so much complaining about Discovery. I really liked episodes 1-2, but it was a risky choice not to start with the main ship and crew. I understand why that didn’t work for some people, especially people who only saw episode 1. Episode 3 seems to be giving a much better idea of what this show is going to be like, and I’m excited to see more.

Another common reaction is:

[…] some things are not what they seem.

While many people didn’t think the first two episodes were great, I still think it’s a fair assessment that other than “Broken Bow,” most Star Trek pilots weren’t all that good. It’s not just Star Trek that has poor pilots. As a general rule, pilots aren’t great to begin with. It’s difficult to sell someone on a show in such a short time.

I also think that Star Trek: Discovery is suffering a bit from the double-edged sword of story arcs. The problem with arcs is they can drag out the underlining message instead of having to try to cram it into one episode. It’s also the good thing about arcs. I understand why people are wanting that Star Trek social commentary meat sooner, after years of famine.

What is your reaction to “Context Is for Kings”?

“Context Is for Kings” Ruminations

There is a lot to digest in this episode, while we continue to keep the previous discussion points about Burnham and Federation cultural imperialism in our minds.

There is the issue of Section 31.

This point in history is tricky because we are in between the periods of Enterprise and Deep Space Nine. Section 31 could possibly interfere even more than they did in Enterprise, before they do something so horrible that they are forced back into the shadows until the events of Deep Space Nine. The Federation is relatively new and finding its footing.

Have they learned from the past mistakes or are they in a period where they are learning hard lessons?

Of course, there will be continued discussion about how Section 31 correlates to the CIA, NSA, and other similar organizations around the world. There will also be many discussions about sides in a war.

As promised, Captain Lorca is going to be the focus of many talks.

Every captain and many Starfleet officers have broken the prime directive, which was adopted from Vulcan protocols because of Archer’s stumbles. Many have also disobeyed direct orders. Previous writers made viewers feel okay about this through framing. Part of why I was turned off from Deep Space Nine was because of how this was framed by the writers. Specifically, Sisko’s attitude of “at any cost,” which wasn’t really challenged, as I mentioned in my previous post.

I think Burnham is going to be that challenge. We will be forced to uncomfortably sit with many issues that have been examined before. However, they have always been framed outwardly instead of truly forcing us to look inwardly as a society.

It’s always been much easier for people to accept the messages found in Star Trek when an alien species or a one-off character is used instead of direct confrontation.

There is one more comment from my Star Trek community that is worth ruminating over:

[…] Alice in Wonderland as a way to truly understand the world.

More specifically, that Alice in Wonderland taught her to not only rely on logic, that sometimes up was down.

What are your thoughts on all the sub-themes introduced in “Context Is for Kings?

Until next Wednesday, Live Long and Prosper.

Composer Gives GeekDad a Shout-out in the LA Times, GeekDad Returns the Favor

1 thought on “‘Star Trek: Discovery’ “Context Is for Kings”: Recap, Reactions, and Ruminations”