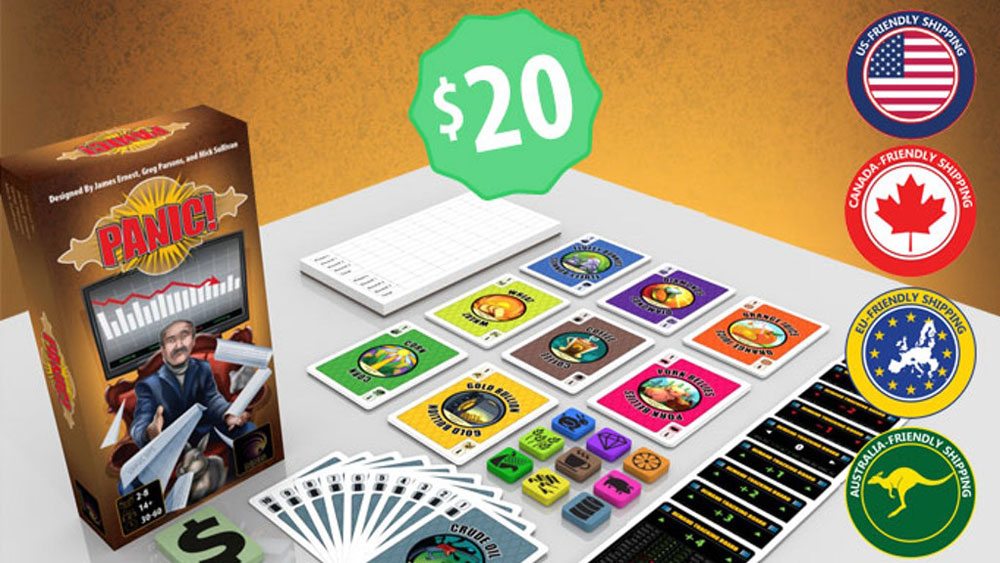 You’re all billionaires playing the commodities market, trying to earn just a little bit more than the next billionaire. Panic! is about manipulating the markets and making money.

Panic! is actually a set of 3 games: Bull Market, Bear Market, and Insider Trading, all played with a common set of components. Panic! is for 2 to 8 players, ages 14 and up, and takes about 30–60 minutes to play. It’s currently seeking funding on Kickstarter, with a pledge level of $20 (plus shipping) for a copy of the game. I’ve played with my 10-year-old, and I think the game is fine for her age range, though she did have some trouble with the strategy.

Note: my review is based on a prototype, so the component quality in my photos doesn’t represent the finished product. In particular, the wooden commodity tokens will be more uniform and match the cards.

The set of components is fairly simple, really, but game designer James Ernest is a wizard when it comes to making fun games out of simple components.

How to Play Panic!

As I mentioned earlier, Panic! is actually a set of three games, so we’ll look at each game in turn. You can download a copy of the rulebook here.

The goal of each of the three games, of course, is to end up with the most money at the end of the game. As the rulebook says, we’re all obscenely wealthy, so everyone wins, so you just want to win a little bit more. At the end of each hand, everyone adds 1 million points to their score.

You will also set the demand tracking cards in the center of the table, using the ones marked for the number of players. For instance, in a 2-player game, you will only have -1, 0, and +1.

In Bull Market, you shuffle the commodities deck and deal 9 cards to each player, and then create 3 stacks in the middle of the table. The stacks will have 2 cards each in a 2–3 player game, or 3 cards each if you have 4 or more players. Any remaining cards are set aside for this hand.

Cards in front of each player represent what that player has invested in, and cards in the center of the table are the marketplace. The higher the total point value of a commodity there are in the marketplace, the less valuable it is. The commodity tokens are used to track the values: whichever commodity has the fewest points in the marketplace is placed on the most valuable demand tracking card, and so on. If two commodities are tied, they are both placed on the higher of the two values (but the lower value card is left empty, so there’s a space before the next lower commodity).

Players will take turns bidding on the right to peek at the stacks of cards. In each hand, there are 3 rounds of bidding, one for each stack, and the game lasts 3 hands. You can bid any number that is higher than the previous bid, or pass. Once everyone has passed, the person who had the highest bid wins and gets to peek at a stack. Then they pay for the bid by locking in cards from their hand face-up in front of them: the value of the cards must meet or exceed the value of their bid. You may only lock in 5 cards total for the hand.

This continues for three rounds, until all three stacks have been revealed.

Then, there’s the Panic! stage. Every player will discard four cards simultaneously to the marketplace, and lock their remaining cards, so that everyone will end up with five locked cards. The marketplace is adjusted to reflect the final values of the commodities, and everyone scores their commodities, and then adds 1 million points.

Shuffle all of the commodities (including those set aside after forming the three stacks) for the next hand. The player with the highest score after 3 hands wins.

Bear Market has a different sorting method for valuing the commodities, and a different method of locking in cards.

Deal a hand of 10 cards to each player, and set aside the rest.

Instead of total point value determining the commodity’s worth, the cards are evaluated based on which commodity has the lowest value card. If there’s a tie, go to the next lowest value. So, for instance, if Oil has the cards 1, 2, and 6 in the marketplace and Orange Juice has 1, 3, and 4, then Oil is lower. Again, if two commodities are tied exactly, they share the higher of the two values, with the other value remaining empty.

Once everyone has chosen their cards, you reveal the discards in the marketplace and sort out the commodities. Repeat this until everyone has 5 locked-in cards (and no more cards to pass). Everyone scores the commodities they locked in, and adds 1 million points.

The value of commodities in Insider Trading is the same as in Bull Market: the higher the total point value of a commodity in the marketplace, the lower its value.

Deal 10 cards to each player, and set the rest face-down in a deck.

The game is played in a series of tricks, which are much like traditional trick-taking games. One player leads by playing a card to the table, and everyone else in turn order plays one card as well. You do not have to follow suit and may play any commodity. The highest card from the commodity that started the trick wins the trick.

The winner of the trick takes the cards that were played, and then takes these actions in order:

You play five tricks total. After the last trick, players will simultaneously each lock 5 total cards (including those that were already locked during the tricks), and discard the rest to the marketplace. The marketplace is sorted one last time, and then players score for their locked commodities. Everyone also adds 1 million points.

The player with the highest score after 3 hands wins the game.

Why You Should Play Panic!

James Ernest, who designed Bull Market and Bear Market, has been designing games for over 20 years now, and he has a sharp wit that comes through in his game designs. For instance, the whole bit about adding a million points at the end of each round, or the rule in Bear Market that the first player to 3 million points wins, and total score is a tie-breaker. Giving everyone a million points per round means that the scores will be relatively close: 3,000,078 to 3,000,023 seems much closer than 78 to 23, right? And since you’re all billionaires, you’ve all made around $3 million by the end of the game anyway, so what’s $55?

All three games share some similarities: you’re speculating about the values of the commodities and also manipulating them. When you invest in something by locking it in, you’re basically making a bet that you hope will pay off—but it also reveals to your opponents what you believe will be valuable, and thus may affect what they invest in and what they’ll try to dump into the marketplace.

I like the bidding/bluffing aspect in Bull Market: deciding how much you want to bid is tricky because the more you bid, the more value you will have to lock in. Sure, you’ll get a peek at the marketplace before having to pass cards, but it also tips your hand and people can work against your initial investments. When deciding what to pass, do you keep some cards to make your opponents think a particular commodity is more valuable? Or do you dump them, hoping to get more cards in your hand that actually are valuable? All of that, of course, assumes that you can figure out which ones are truly valuable and which ones aren’t.

Bear Market‘s different valuation rules introduce a new twist: since the commodity with the lowest card is worth the least, you don’t want to dump the “1” and “2” cards into the marketplace if you’re investing in something. On the other hand, if you lock in only low cards, you still won’t score very much at the end because you need higher cards to take advantage of the multipliers. Since everyone is adding a card to the marketplace every round, you get more information more quickly, but sometimes by the time you figure out how the market is headed, you’ve already invested too heavily in a stinker.

Insider Trading works a little more like a traditional trick-taking game, but winning a trick is a little like winning a bid in Bull Market: you get a chance to influence the market a little more, but you also reveal your strategy to other players. On the other hand, if you don’t win any tricks, then at the end of the game you’re stuck locking in whatever five cards you had left. It may be that the best strategy is to win some tricks, but not all of them, so that you still have some choice at the end for what to lock in and what to discard.

I like the idea of playing multiple games with a common set of components. In this case, it’s primarily a special deck of cards, so it makes sense that you could make a few different games with it. Putting a commodities market theme on it seems to go really well, and if you like economics-based games, Panic! offers three games that are fairly easy to learn and quick to play. The playing time grows with the number of players—at least in the case of Bull Market and Insider Trading. With Bear Market, since decisions are made simultaneously, adding more players doesn’t increase the play time quite as much.

For more information or to make a pledge, visit the Panic! Kickstarter page. 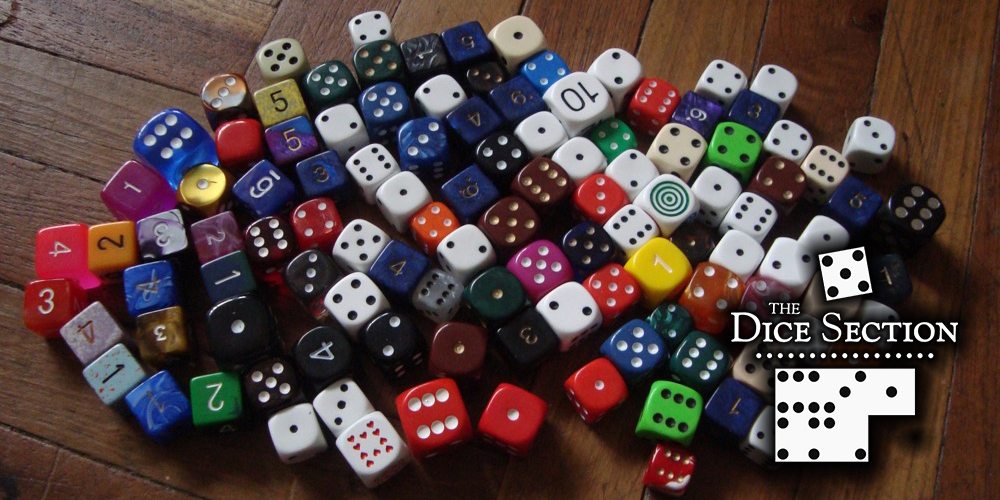 The Dice Section #29: Let Me Tell You About My ‘Shadowrun’ Character 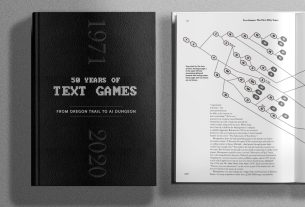