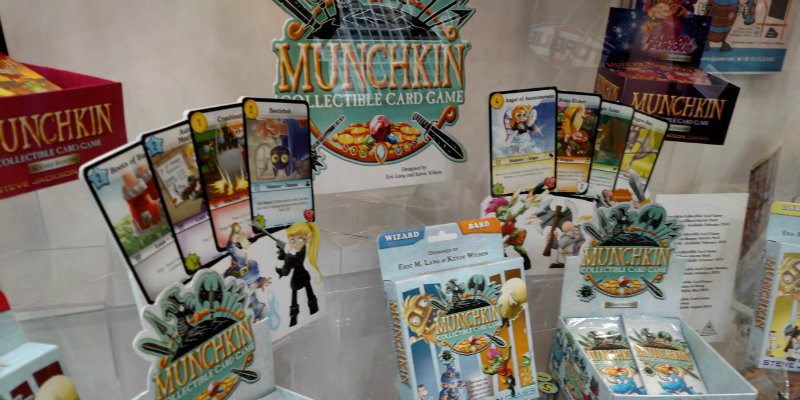 I always look forward to visiting the Steve Jackson Games team at Gen Con: They’re always an excited bunch, often hilarious, and a ton of fun to play games and geek out with. This summer’s visit was no exception, and there was some very neat stuff to check out.

The big Munchkin-related news at Gen Con 2017 was the unveiling of the forthcoming Munchkin Collectible Card Game, which is set for release in February 2018. Starter sets will come with two heroes and 80 cards – it’s a two-player game, with each player’s deck consisting of one hero and 40 cards – and a core pool of 300 cards will be available. Also included with the starter set are level counters, coin tokens, and a die. The game features the work of seven different Munchkin artists, and expansions are planned for next May (“The Desolation of Blarg”) and August (“Fashion Furious”).

Steve Jackson’s Hunter Shelburne took the time to play a game with me, and although CCGs aren’t usually my thing, I enjoyed this. The core mechanic is that you’re hiring monsters to attack your opponent, while equipping your own hero for battle. The “hiring” aspect adds a new factor to this kind of play, though, since it introduces bluffing as a key strategy: When you send a monster against your foe, you place it face down and put a pile of coins alongside. Each monster has a minimum “fee” that you must meet to use it in battle – stronger monsters command higher fees. But if you overpay, you may be able to fool your opponent into burning one of their powerful weapons or armor against a weak monster. Mischief cards, loot, and allies also figure into the mix, and the first player to knock the other down to zero points is the winner. (It’s designed as a two-person game, although Munchkin Czar Andrew Hackard figures folks will quickly homebrew multi-player rules.)

The complete Munchkin Shakespeare Deluxe edition, successfully funded on Kickstarter back in March, was on display and being used for demos, and it looks as sharp as expected. This one’s a couple years in the making, with its origins on the 2015 JoCo Cruise, when Steve Jackson’s crew thought it would be fun to crowdsource ideas combining The Bard and Munchkin. Thinking they’d maybe get enough material for a booster set, or a small box, the team wound up with seven or eight poster-sized pages of notes, according to Hackard.

Munchkin Shakespeare Deluxe is coming with 168 cards, 12 standees, and a game board, and will be more widely available at retail later this year after the Kickstarter backers’ orders are fulfilled. Some of the extra accessories produced for the game – things like Kill-O-Meters and 3-D pawns – may also hit retail between October and December.

Other Munchkin stuff recently released or on the way includes another game featuring Moop – Munchkin: Magical Mess launches in January as a standalone set with 168 cards and a game board, and Munchkin Lite, a streamlined base game with 115 cards designed for quicker play and an easier intro for new players. Steve Jackson’s second Walgreens exclusive, the Katie Cook-illustrated Munchkin Spell Skool, was also an attention-getter in Indianapolis, loaded as it is with gags and wordplay spoofing familiar wizard-school stories. (“Humphrey Boggart,” “Speak Hamstertongue,” and the Level 20 Undead “Moldy Mort,” anyone?)

I also played a short demo of Super Kitty Bug Slap, a quick and easily-taught spot-the-match reflex card game that seems in line with some of Steve Jackson’s offerings for a younger audience, coming in December.

Sadly, despite three full days packed with gaming, I didn’t manage to carve out time for a demo of the combat system in Dungeon Fantasy: Powered by GURPS, which should be going out to Kickstarter backers soon. I did get to check out a final version of the books, box, and contents, though, and it looks to be just what the company aimed for: a completely self-contained introduction to GURPS fantasy adventuring, with enough material to fuel games for quite awhile. The art is striking, the books look jam-packed, and the combat maps are fantastic. As someone who has never played GURPS and has been a bit intimidated by the sheer volume of material out there, I cannot wait to get my hands on this. (Seriously: This project broke my six-year Kickstarter-free streak.)