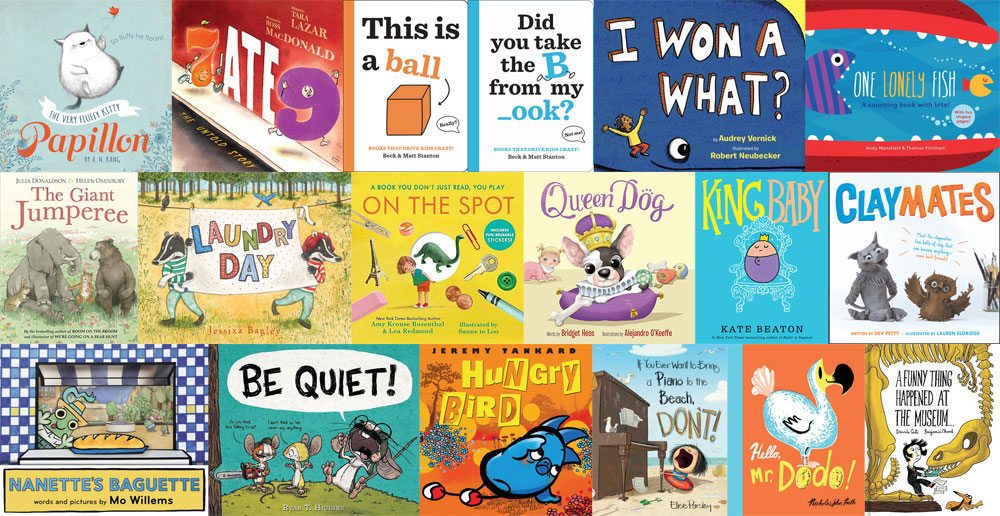 My favorite picture books to read out loud are still usually the ones that make us laugh, so today’s stack is all about funny books. 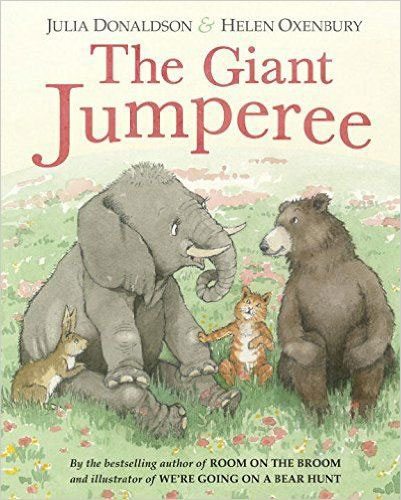 The Giant Jumperee by Julia Donaldson, illustrated by Helen Oxenbury

As Rabbit hopped home, he was scared away from his burrow by a loud voice shouting: “I’m the Giant Jumperee and I’m as scary as can be!” His friends—Cat, Bear, and Elephant—all try to come to his aid, but each one is chased away by the Giant Jumperee’s threats. Who is the Giant Jumperee, and how will they get it out of Rabbit’s home? This picture book by Julia Donaldson (author of family-favorite The Gruffalo) has a funny, not-so-scary ending, and the illustrations by Helen Oxenbury (We’re Going on a Bear Hunt) are lovely. 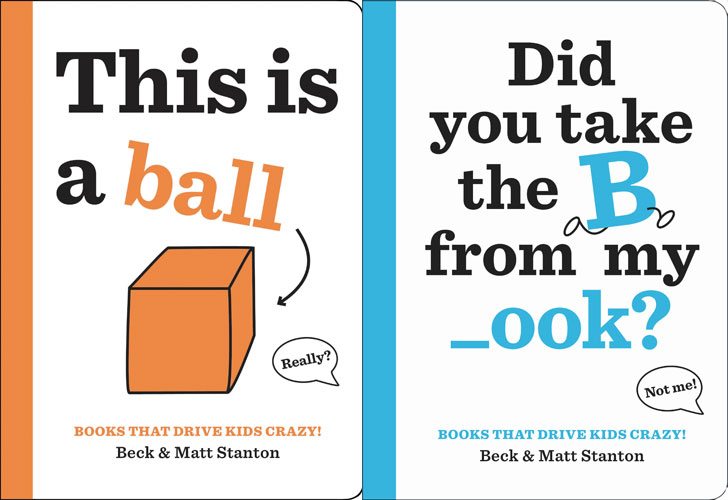 This Is a Ball and Did You Take the B From My _ook? by Beck and Matt Stanton

These two books are labeled “Books That Drive Kids Crazy!” and they are a great pairing with The Book With No Pictures, because they’re all about narration that gets the kids involved. This Is a Ball describes a series of pictures, but with totally incorrect words. The balloon is called a kite, the elephant is called a dog, and so on—and as you read, kids are sure to speak up to correct you. In Did You Take the B From My _ook?, you sneeze as you’re reading, and all of the Bs are now missing, which makes it very hard to read about a beetle wearing blue boots bouncing on the bed. Can your kids help you get your B back? Well, it may depend on whether they like how silly you are when you can’t say them. Like the books in this article by GeekMom Jackie Reeve about unreliable narrators, these books will have the listener paying attention and making sure you’re saying the right things.

A Funny Thing Happened at the Museum… by Davide Cali, illustrated by Benjamin Chaud

Henry’s adventures continue in this small picture book by Cali and Chaud, with another series of unbelievable events, this time in a museum. Henry gets separated from his class on a field trip, and ends up on an unplanned trip through various exhibits, leaving his own mark on them along the way. 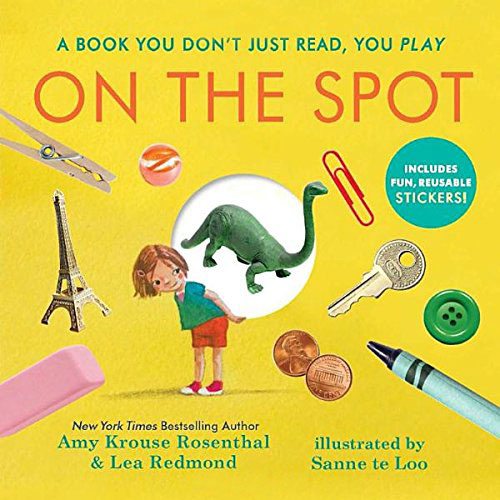 On the Spot by Amy Krouse Rosenthal and Lea Redmond, illustrated by Sanne te Loo

This book is just about a little girl having an average day out and about, told in rhyming verse. But what makes this book unique is that each page has a blank circle, and you get to fill it in. Find objects from around the house and place them on the pages as you read the book, or use the reusable stickers in the back of the book. What will she have in her bowl for breakfast? What does she climb at the playground? It’s up to you—and the results are delightfully silly. 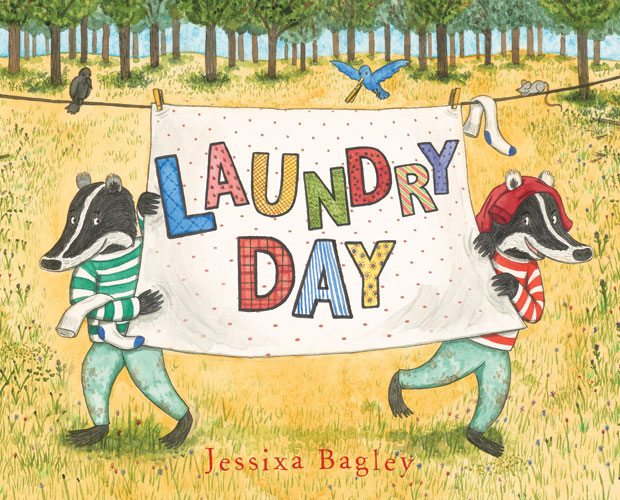 The badger twins Tic and Tac are bored, so Ma Badger asks them to help hang up the laundry on the line while she goes to the market. The kids pick up on it quickly, but then they run out of laundry … so they start hanging up other things. It gets a little out of hand. Short, but good for a laugh. 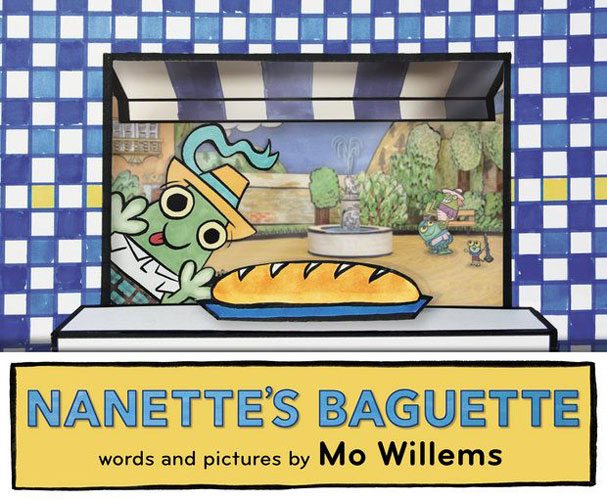 Nanette the frog has been given a big responsibility: today she will get the baguette, and she’s all set—but will she forget? The entire book is filled with words that rhyme with “baguette,” and the illustrations are cut-out drawings set in a 3D paper model of a French village. Nanette’s adventures in getting the baguette are silly and really fun to read aloud. 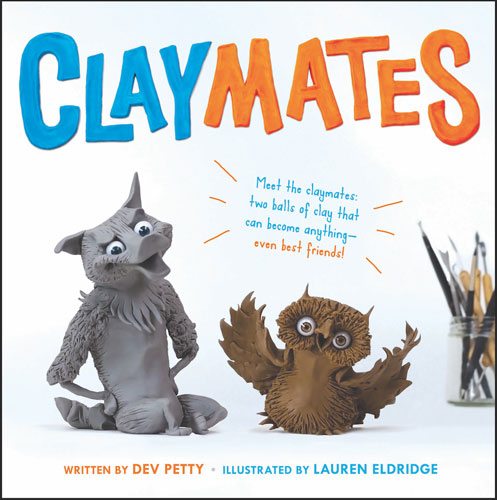 Brand-new this week, Claymates is about two clay creatures, a wolf and an owl, who have been left to their own devices for a day and decide to have a little fun with the clay sculpting tools. The pictures are photographs of actual clay sculptures, and are absolutely wonderful. The two creatures stretch, cut, poke, and pull themselves into all sorts of shapes … but then what happens when the artist returns to the studio? 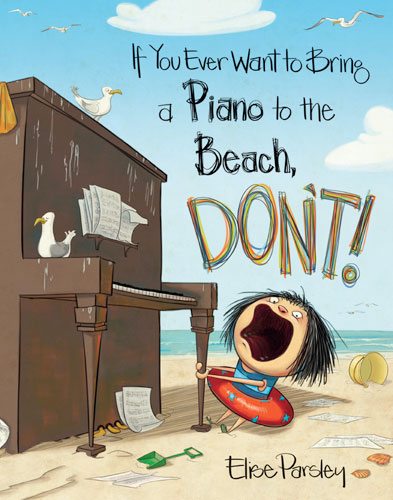 If You Ever Want to Bring a Piano to the Beach, DON’T! by Elise Parsley

This is a very informative book that explains why you shouldn’t bring a piano to the beach (following up a book about bringing an alligator to school, and followed this year by one about bringing a circus to the library). Hey, Magnolia’s mom said to bring something to play at the beach, right? But it turns out that it’s not such a good idea because something might happen to the piano, and Mom might get upset, too.

Bird and his friends go hiking … but then he gets hungry. Didn’t anyone bring a snack for him? Everyone tries to share, but Bird doesn’t like anything: Sheep’s grass is gross, Rabbit’s carrot is too orange, and Beaver’s sticks … well, everyone knows birds don’t eat sticks. As with Grumpy Bird, things escalate until Bird reaches a breaking point—and it might be familiar to anyone who has a toddler. Maybe it should have been called Hangry Bird. 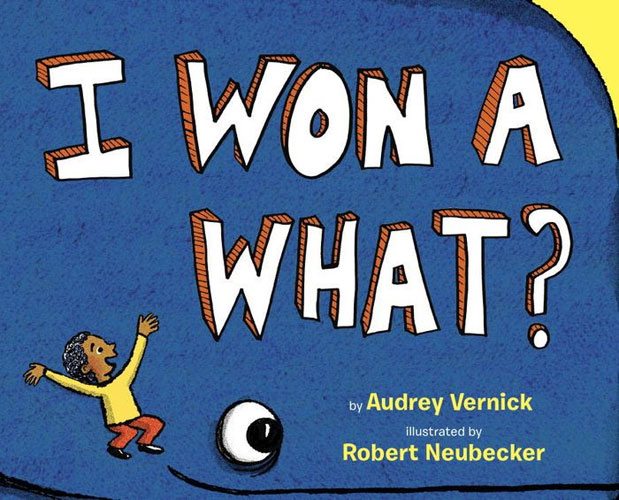 I Won a What? by Audrey Vernick, illustrated by Robert Neubecker

This little kid has always wanted a pet, but his parents have never agreed. At the fair, they’ve agreed to let him keep whatever he wins at the goldfish booth. Turns out, what he wins is Nuncio, who is not a goldfish—he’s a whale. But a promise is a promise, so they agree to take Nuncio home, on a trial basis. It’s a lot of responsibility, but the boy is up to the task. It reminds me a little bit of Billy Twitters and His Blue Whale Problem, but in that book the whale is given to a boy as a punishment, rather than a prize. 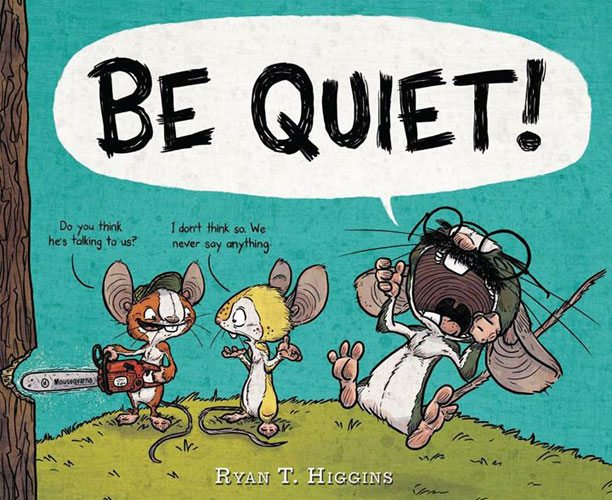 Be Quiet! by Ryan T. Higgins

The three mice who turned Mother Bruce’s home into a hotel are back, this time as the stars of the book. Well, in particular, Rupert the Mouse is the star, and he’s going to be in a wordless book because, in his words, they’re “very artistic.” Except his two friends Thistle and Nibbs just don’t quite understand the concept, resulting in a comedy of errors (with lots of visual gags). 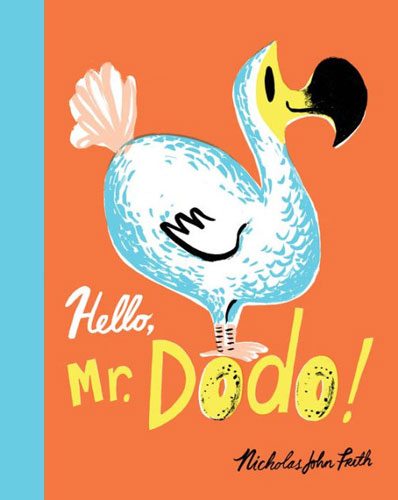 Martha loves birds, and can identify all of them, until one day she meets one she’s never seen before … a dodo! Sure, they’re supposed to be extinct, but she and Mr. Dodo have a great time together until she accidentally lets her secret slip. Now people are lined up outside her house to see her dodo—what will she do? 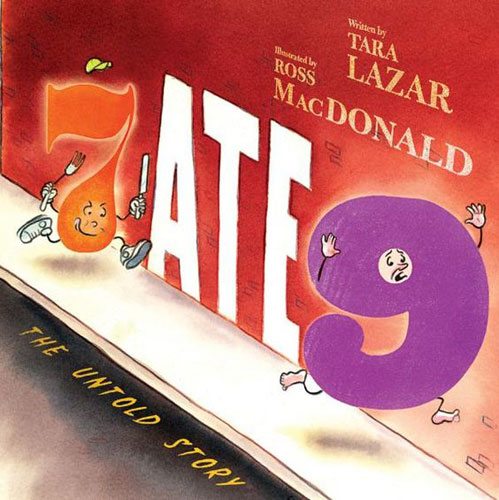 Lazar and MacDonald show that math can be funny (and punny) in this detective story. Private I hates dealing with number—they’re always stuck in a problem. But when 6 shows up at his door, terrified that 7 ate 9 and is now after him, I decides to investigate. It’s a funny mystery that brings the numbers (and a few letters) to life. 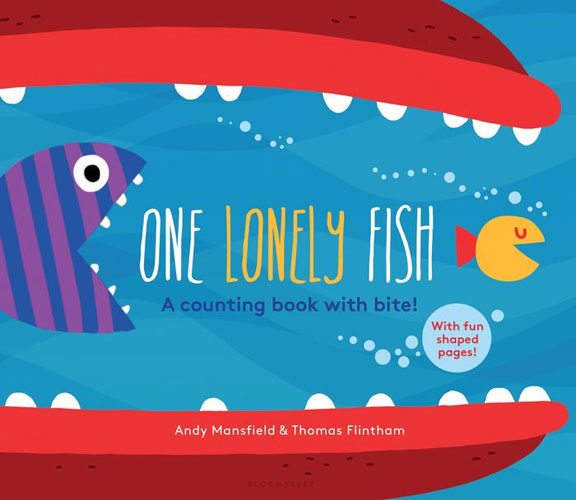 One Lonely Fish by Andy Mansfield and Thomas Flintham

Even counting can be funny! This book starts with one lonely fish, and the cut-out board book pages reveal more and more fish, each ready to swallow the one before. 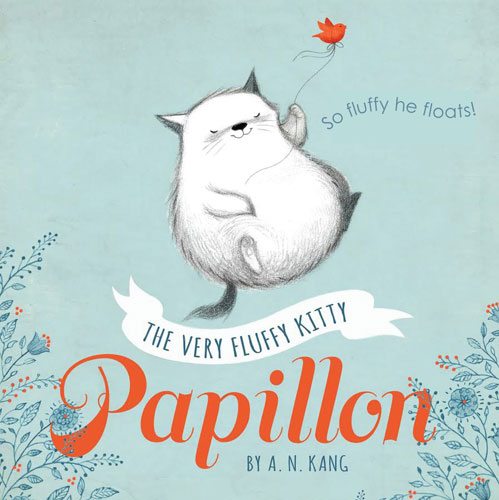 Papillon: The Very Fluffy Kitty by A. N. Kang

Papillon is such a fluffy kitty that he floats, and his owner Miss Tilly has to come up with creative solutions, like putting Papillon in costumes and headgear that help him stay on the ground. Being a cat, of course, he doesn’t care for these things—until one day he floats outside and gets lost. The illustrations in this are superb, though if you’re a cat owner I don’t recommend trying to stuff your cat into all of the silly costumes you’ll see here. 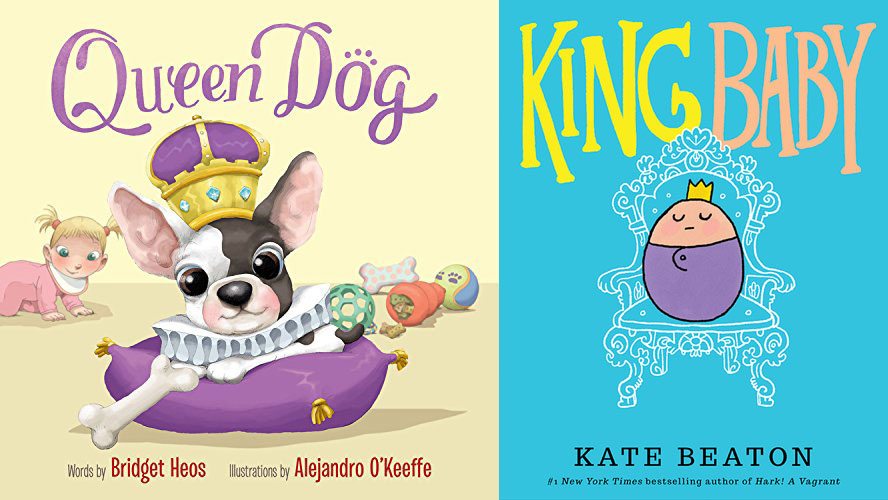 Both of these books are about the little rulers in our lives. Queen Dog is a benevolent ruler, but lately things have been going downhill. Her subjects seem preoccupied, and somehow this lavish party appears to be for a new guest instead of her—what could it mean? Meanwhile, King Baby has lots of demands, but also bestows favors like giggles and coos. As he gets older and no longer needs so much from his subjects, what will happen to them? Well, never fear … there’s a new successor on the way. 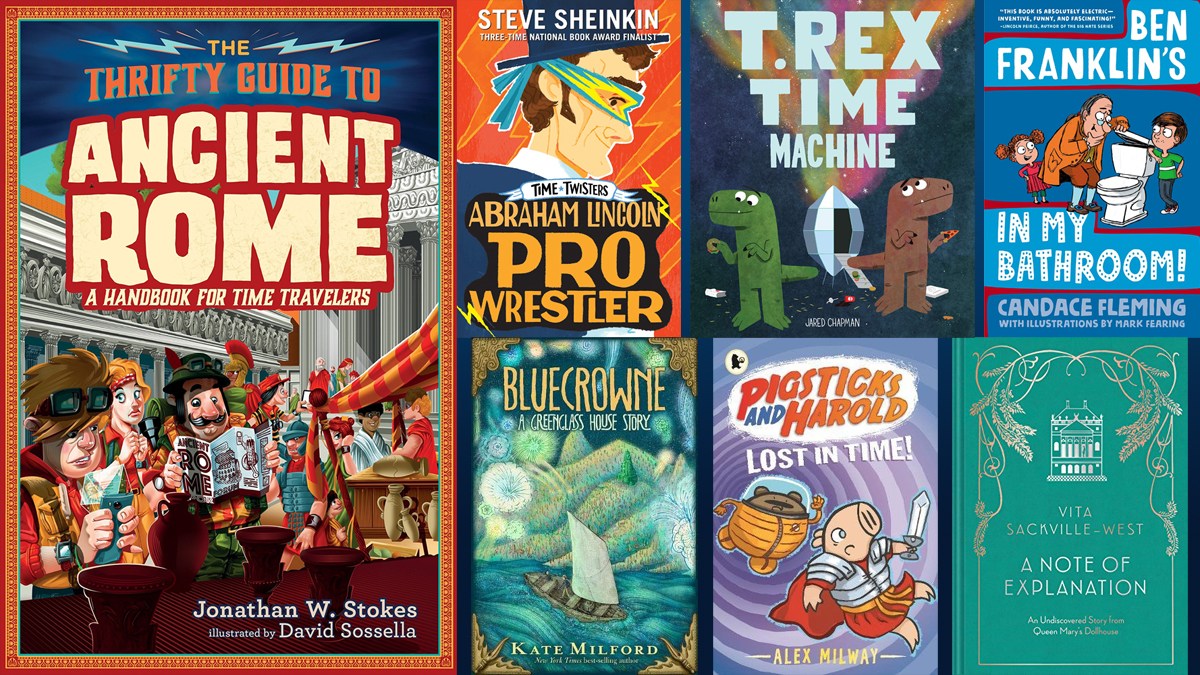