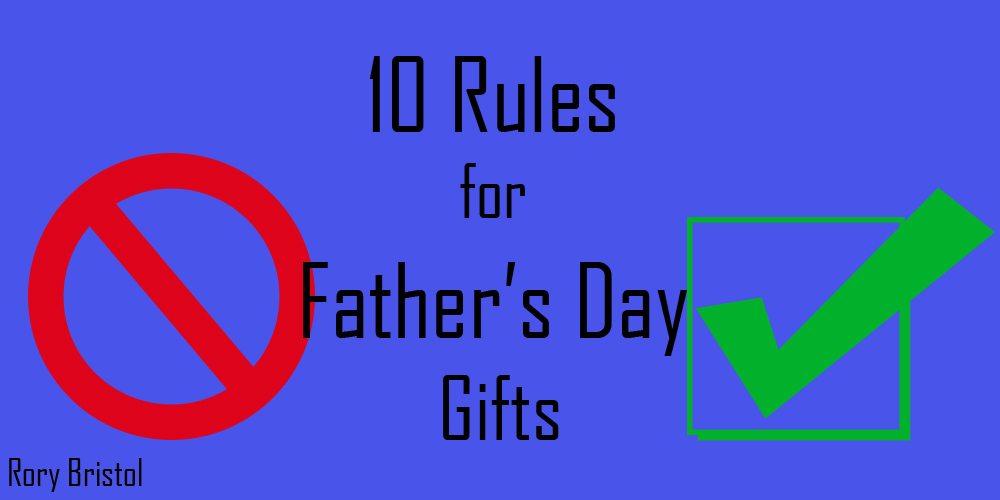 If everyone gave the perfect gift every time, life would be a magical place. Unfortunately, geeks like me fail to grasp social norms right away, and we need rules to help us do things correctly. Sure, everyone faces the inevitable faux pas of buying the wrong gift. Sometimes we think we’re being thoughtful, and sometimes we think we’re being funny. Either way, sometimes we are dead wrong, and I have struggled with it more than most. Thanks to the patience of my friends and family, I’ve been able to codify what makes a bad gift, and how to pick a better one. Here are the 10 rules that govern my gift-giving practices.

Rule 1: If you want to give clothes, focus on gifts they will be happy to wear.

Crazy clothes aren’t a good idea, ever. Crazy-quilt ties, orange shirts with blue polka-dots, or any kind of cuff links are all off the menu. If Dad won’t wear it, why are you giving it to them? Give Dad a gift along the lines of the gift box sets from Mission Belt. These sets are useful, good in a variety of styles, and make Dad’s life easier. They have no holes, which means their belt doesn’t need to be re-punched if they lose weight, and it always fits just right. If Dad tends to fluctuate in weight like I do, the 3-piece Basic Gift Box set can cover him at each size. Order on the large side, as they can easily be trimmed to be the correct size. They cannot, however, be made longer. Cut carefully! The best part is that each gift box features several colors and/or styles, so Dad can use them anywhere.

Rule 2: There’s no such thing as the World’s Greatest Dad.

Giving Dad a mug, hat, shirt, or (please never) underwear that says “World’s Greatest Dad” is a sure recipe to burden Dad with something he won’t ever wear. For many dads, it just feels like bragging about something we haven’t earned. Instead, consider giving him a gift that tells Dad you’re thinking of his interests. You can give him some Harry Potter or Voltron gear, for example. But make sure you’re getting the right gear. Most people have a favorite house in Harry Potter, or a favorite Voltron pilot.

The classic example is the tacky BBQ apron. If your dad is a grill master, don’t buy him an obnoxious apron. Instead, buy him a quality set of grilling tools (but only if they’re better than what he has). Otherwise, consider chipping in for the remodel he’s always wanted for a built-in grill, or helping him upgrade an older one. Just be sure to involve him in that decision, so you know he’s getting the grill he wants.

Although Sky Mall has some interesting-looking gadgets, avoid useless gifts like the self-closing box. Not only will Dad feel like he hasn’t taught you to spend your money appropriately, he will also beat himself up over getting rid of the cluttering item, because he loves the person who gave it to him. Instead consider upgrading his toolbox or tools. A Dewalt Deep Box toolbox, for example, is a great option. It’s deep, and well built. Focus on things that make life easier, not just clutter up the garage. That way, Dad’s got a great use for the gift, and will always think of you while working in the shop.

Dad might spot a set of camouflage seat covers and exclaim over their slick style, but that doesn’t mean he wants to have them in his car. Avoid buying useless upgrades for your car-loving dad like air fresheners, car seat covers, etc. Instead, get him tickets to an automobile museum, a classic car show, or even an assembly plant tour. Same thing goes for dads who admire an $80 sculpture of Beowulf. When in doubt, remember rule 4!

Rule 6: Never use a gift-giving occasion to give yourself a gift.

It never goes over well when you give gifts you bought for yourself, whether it’s tickets to a show or to another country. If you want to take dad to the movies, get him a Fandango gift card, and make a commitment to go see a movie of his choice. But don’t be cheap! It’s not a gift if he has to buy everyone else’s tickets, popcorn, and soda.

Rule 7: Dad already knows he’s not fit, and it’s his problem, not yours.

Don’t get dad a gym membership, or buy him gadgets like a Fitbit or a scale, unless he’s specifically asked for them. Remember Rule 4, and take a different tactic. The better option is to give dad a completely different gift. To promote his health, invite him to go camping, hiking, or even to another country. On Father’s Day, give him the invitation and plan it together. Make it an adventure, and Dad won’t be shamed into being active. It will be spending time with someone he loves: you!

Rule 8: Gifts aren’t a chance to tell someone to fix themselves.

Avoid gifts that tell Dad to take care of a problem. No nose hair trimmers or mani/pedi gift cards, okay? It might be good for a neutral weekend invitation, but not a gift for Father’s Day. Instead, choose a gift that gives him joy or makes his life better, like the Lumiwave, an infrared pain relief device. This awesome device was a Runner’s World Pick at CES 2017, and is just like the infrared technology that a physical therapist would use. Healing is always a great gift, and lifts Dad up, rather than putting him down in an off-handed way.

Rule 9: Pets/Plants/Projects are burdens, not gifts.

When considering the perfect gift for Dad, be sure to never give obligations. Pets, plants, and long-term projects like DIY kits are just things you’re putting on Dad’s plate instead of giving him a gift. If Dad is going to adopt a dog soon, offer to cover the adoption fees, and give him a gift card for things he needs. With an Amazon gift card, he can order things like collars, food, and toys.

These gifts are rarely considerate, and often leave the recipient feeling deflated. He probably doesn’t want a star named after him, or a hippo fostered in Niger. At most, you might get a certificate or an email saying how Dad “helped” someone or something he’s never known. It just doesn’t feel personal. Instead, offer him an experience. You can join him as in an activity that he likes, such as going to the movies, volunteering at a shelter, or even playing several hours of Diablo III together.

Bonus:
The Jenny Rule: Ask them what they want, and go with that.

I learned this one from/for/about my wife, and it has changed the way I experience gift-giving. Gifts don’t have to be a surprise all the time. Some of the best gifts are ones that they’ve decided on and asked for. This way, you know you’re getting them the perfect gift, because it’s exactly what they asked for. This is great for picky people (*cough* GEEKS *cough*) because you don’t have to guess which LEGO kit they want, or which Sonic Screwdriver they’d like, or if they want those at all! You will always be giving them the best gift possible: active listening, consideration, and respect.

Review: A Home for Mr. Easter

And This is Why We Love Our Moms