Star Wars fans rejoice! Especially fans of early Star Wars comics or of comic strip history. This month sees the release of the first volume of Star Wars: The Classic Newspaper Comics, which finally delivers the original daily and Sunday strips in all their glory!

As Star Wars fans, we’ve gotten burned before. I know that. We’ve all been conned into buying the same thing two or three times in different packaging. It’s true. And even though these comics have been published (of a sort) before, this is really the first time we’re getting the strips in their original and complete form.

Star Wars appeared as a syndicated newspaper comic strip from 1979–1984. The strip told original stories; it didn’t adapt the movies or slice up the concurrently running monthly Marvel comics. After 1984, the strip was largely forgotten, along with most of Star Wars as the franchise was left to flounder for the better part of a decade.

Starting in 1992, Dark Horse Comics reprinted the strips under the Classic Star Wars title. Dark Horse colored the daily strips, stitched them together, and printed them out of order. They began with the later Archie Goodwin and Al Williamson stories and completely ignored the Sunday strips. Still, for diehard fans, it was better than nothing.

In 1994, Dark Horse went back to the original Russ Manning strips (which were published in newspapers first, in 1979 and 1980) and gave them a similar treatment with Classic Star Wars: The Early Adventures. Two of Manning’s storylines (along with the Sunday strips) were omitted completely from that series’ 9-issue run. One was later collected in a one-shot exclusive to Kay-Bee Toys. The other (“The Kashyyyk Depths”) was never republished.

IDW (which recently managed a coup and secured a Star Wars license from Disney/Marvel) is giving the strip the comprehensive treatment it deserves. If you don’t already know, IDW is doing the nerdy lord’s work with their Library of American Comics. They’ve been quietly creating gold standard editions of classic comic strips that every fan of the genre should have in their library.

Volume 1 of Star Wars: The Classic Newspaper Comics collects the entirety of Russ Manning’s run on the series (plus one non-Manning story): 575 strips’ worth of classic Star Wars awesomeness. Dailies are reprinted in black and white and at the original size, and full-color Sunday strips are included. This is the first fully complete, chronological collection of the strips as they originally appeared nearly 40 years ago.

Included in Volume 1 are the following stories: 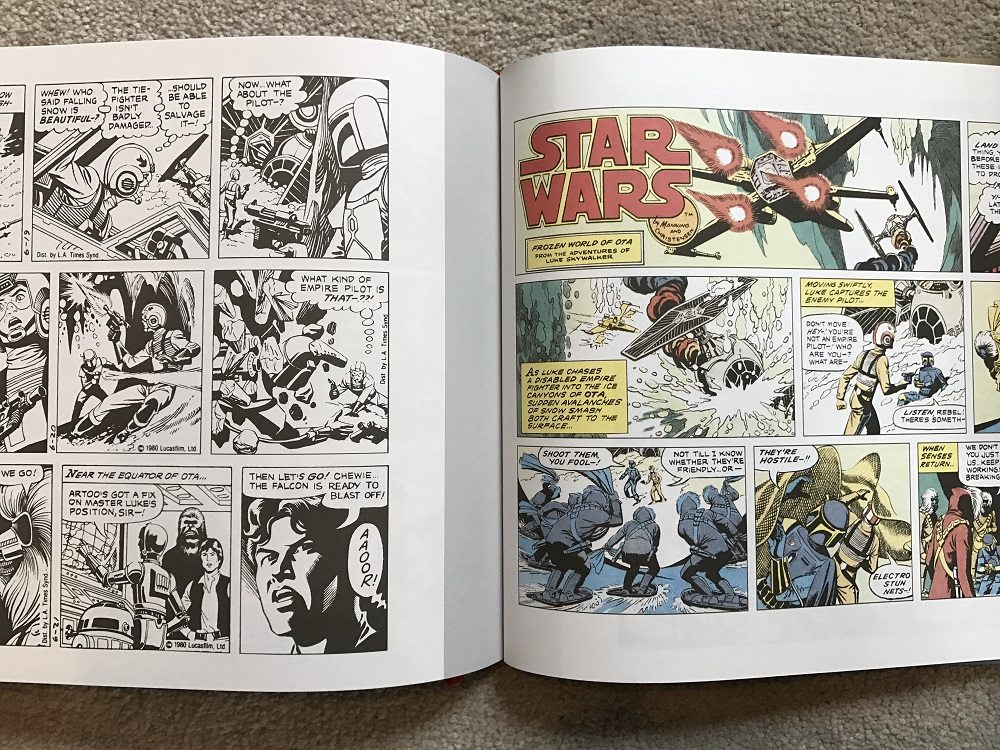 The book begins with a couple insightful prologues: one about the history of the strip and Manning’s contribution to it, and the other a remembrance of Russ Manning and his career. Both help put the strip into historical and creative context, and they really round out the package.

In addition to all of Manning’s published strips, the book also includes rough samples he submitted to Lucasfilm during the planning stage, a couple unpublished strips from “Gambler’s World,” and the six-episode storyline he submitted as a final sample.

IDW has done a phenomenal job with this book. It’s beautiful in every respect, and I can’t wait to see the next two installments. Volume 2 (release date hasn’t been announced yet) will include all of the daily and Sunday strips from October 6, 1980, through July 25, 1982 (i.e., the beginning of the Archie Goodwin and Al Williamson era).