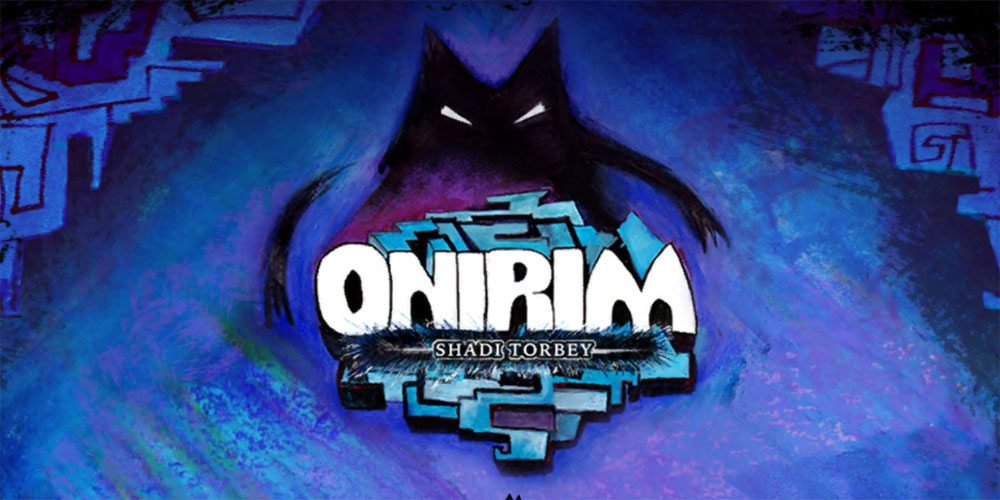 Onirim, a card game about escaping from a dream labyrinth, is now available in digital form for iOS and Android from Asmodee Digital. I got a chance to try the iOS version, which reproduces the card game pretty faithfully, with some added animation and effects.

The story is that you are a Dreamwalker, lost in a labyrinth populated by Nightmares, and you need to find the eight oneric doors to get out before your dreamtime is over. The tabletop version was originally published in 2010, with a second edition in 2014 that added some new mini-expansions for variant play. While the tabletop version can be played with 1 or 2 people (coooperatively), the app so far is single-player only, and uses just the base card set. 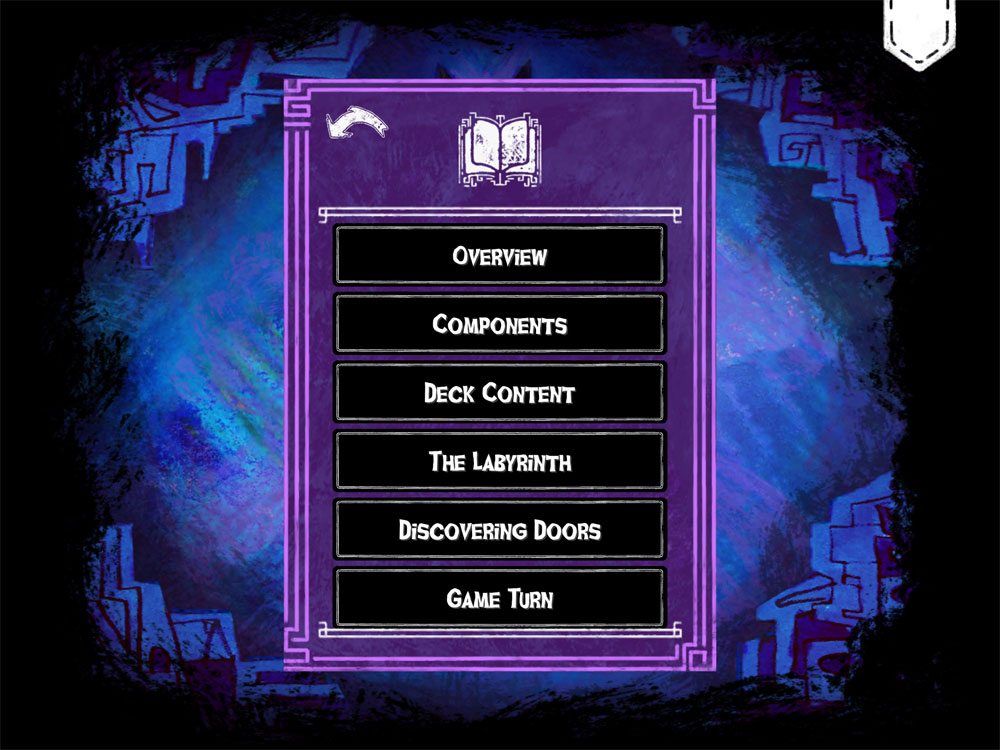 The app has a rulebook included that is pretty much the same information that you’d find in the physical rulebook. Plus, if you like, you can play the tutorial, which will walk you through all of the different aspects of the game before letting you finish the practice game on your own.

Since I’d played the game before, I skimmed the rules and then started playing at first, but there were a few rules I’d forgotten about, so the tutorial was a good refresher. The one thing that isn’t explicitly explained in the tutorial is the number of each type of card—the red cards are the most numerous, and the tan cards are the least, so that’s important to know when you’re making decisions later on. (The card numbers are available in the rulebook section.) 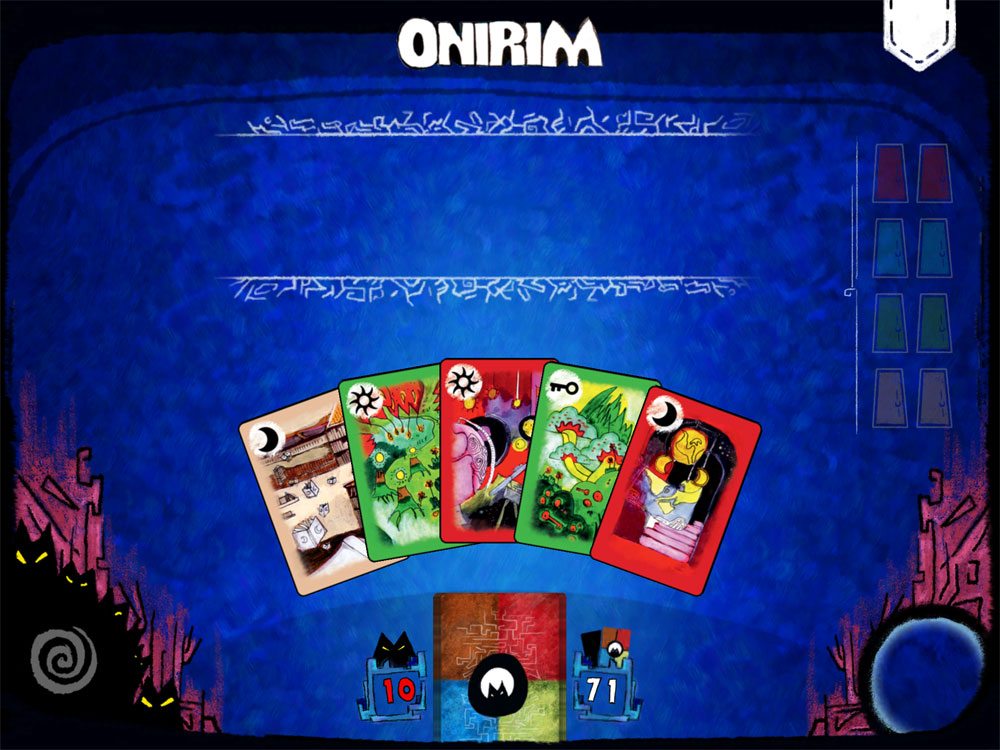 Here’s a quick run-down of the game. Your goal is to open all 8 doors (2 of each color) before the deck runs out. At the bottom of the screen, you can see the number of cards left in the deck, as well as the number of Nightmares remaining in the deck. At the top right are the doors you’ve unlocked.

You have a hand of 5 cards, and you always draw back up automatically after playing or discarding cards. On your turn, you may either play a card into the labyrinth (the blank space at the top) or discard a card. You may not play two cards in a row with matching symbols. 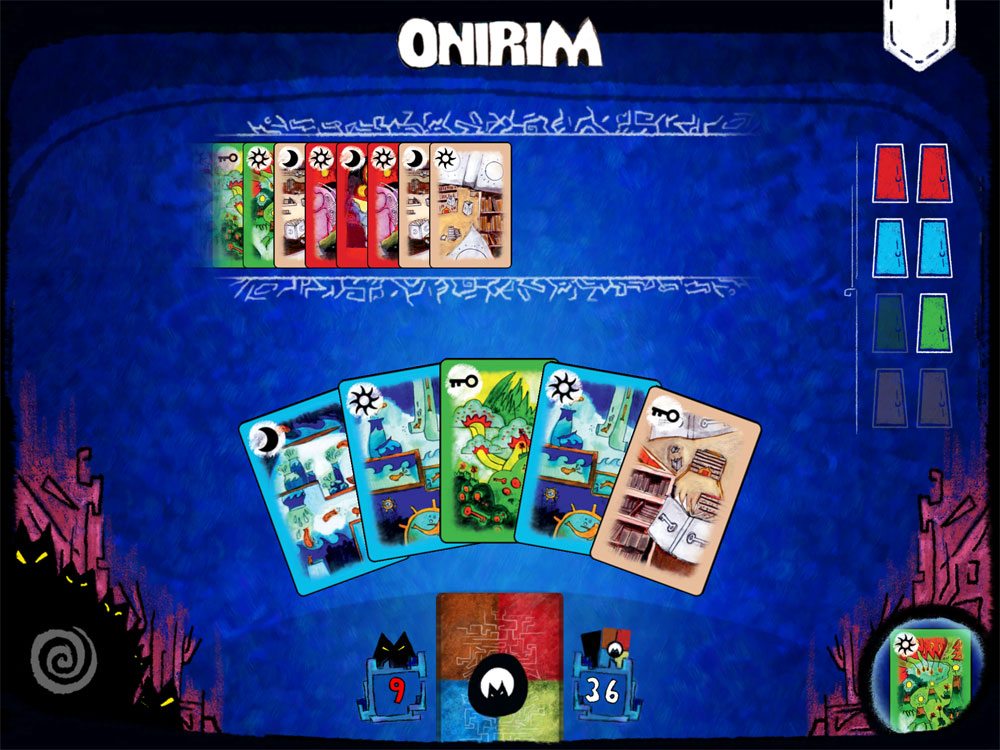 If you play three cards in a row of the same color, you unlock a door—it is pulled out of the deck, and the deck is reshuffled. One trick is that there are more sun cards than moon and key cards, so you’ll often have to spend a card just to transition to another color, or else discard some extra sun cards in the hopes of getting something better. 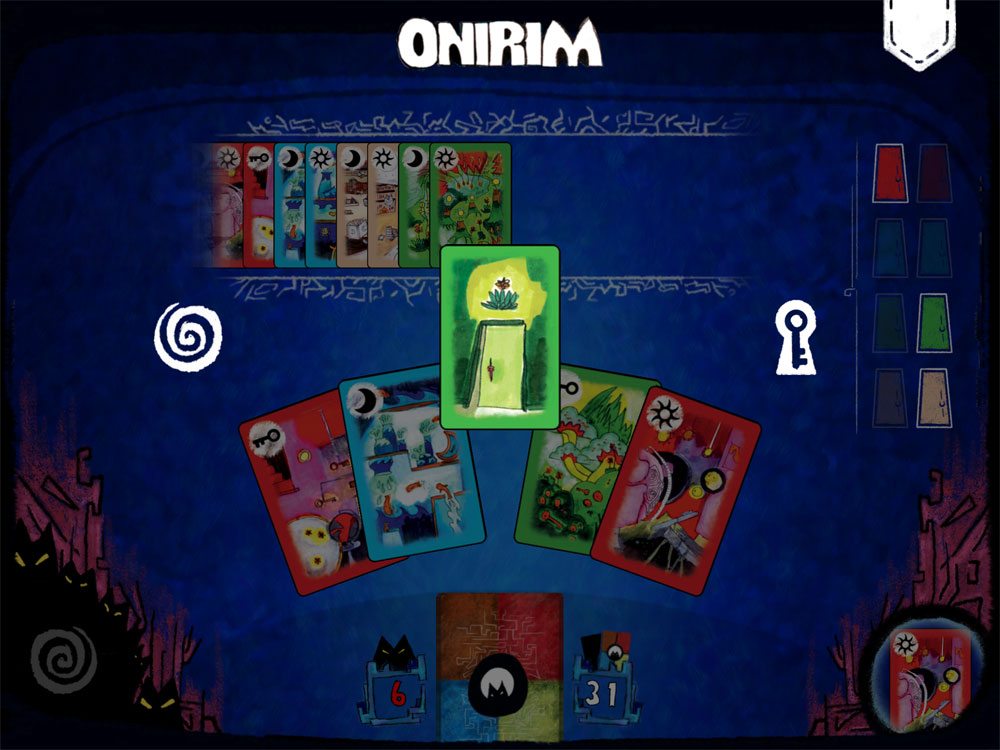 If you draw a door when refilling your hand and you currently have a key of the matching color, you may discard the key to unlock the door—or you can throw the door into Limbo (where it will get reshuffled into the deck) but I’m not sure why you’d choose to do that. 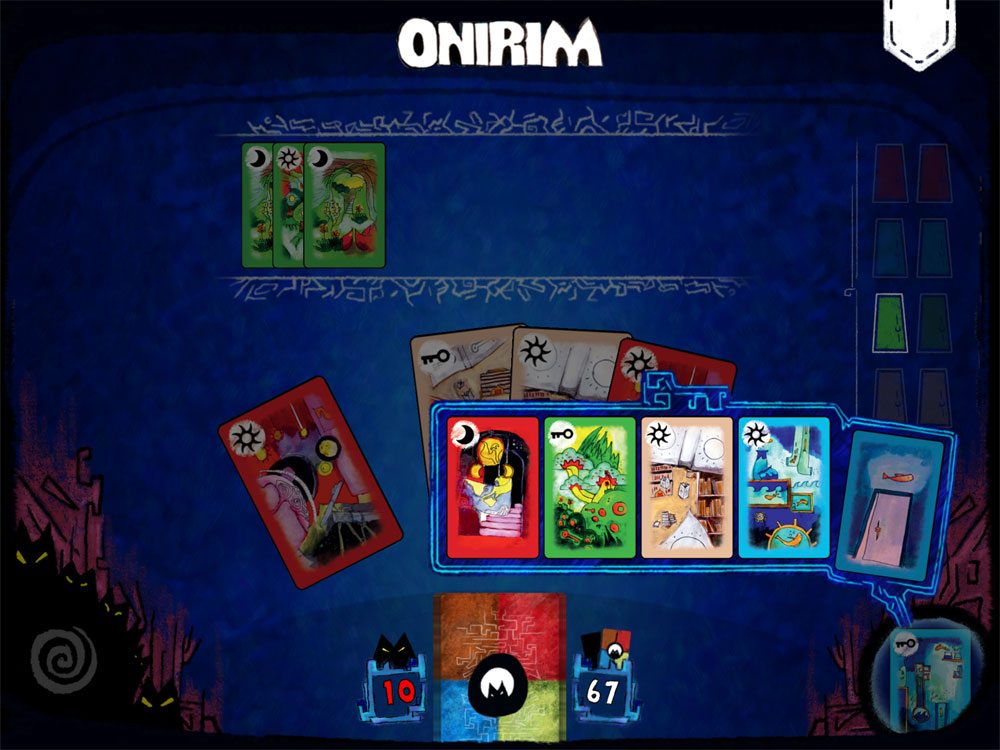 If you discard a key from your hand, you can trigger a prophecy: the app will show you the next five cards in the deck, allowing you to reorder. The last card will be discarded from the game, and the other four will be placed back onto the deck in the order you choose. 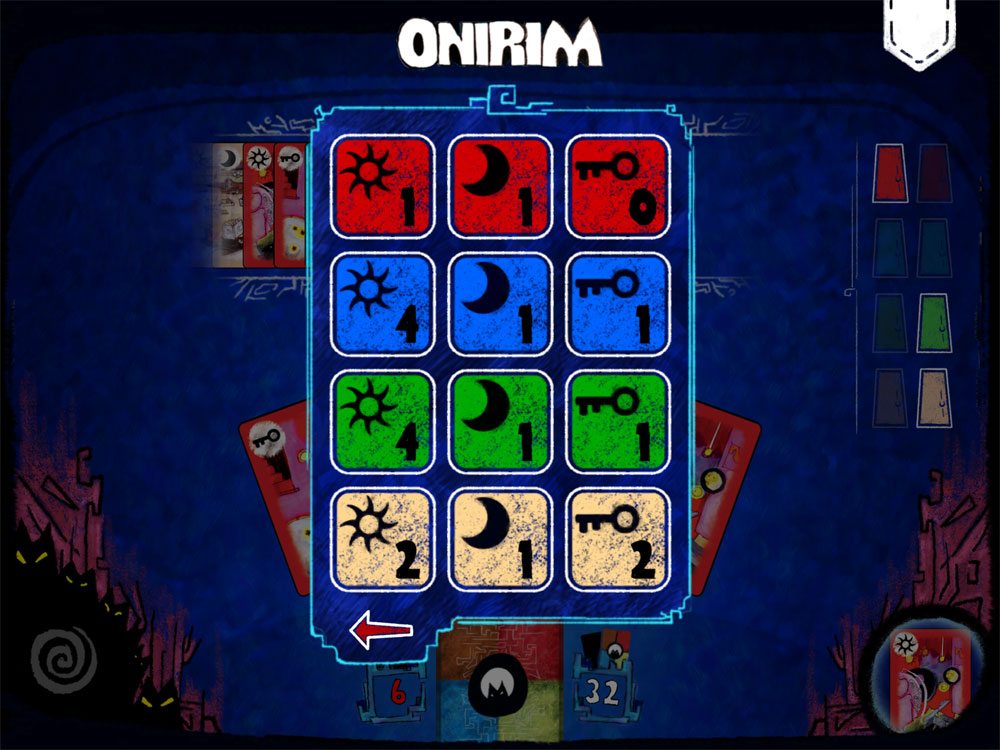 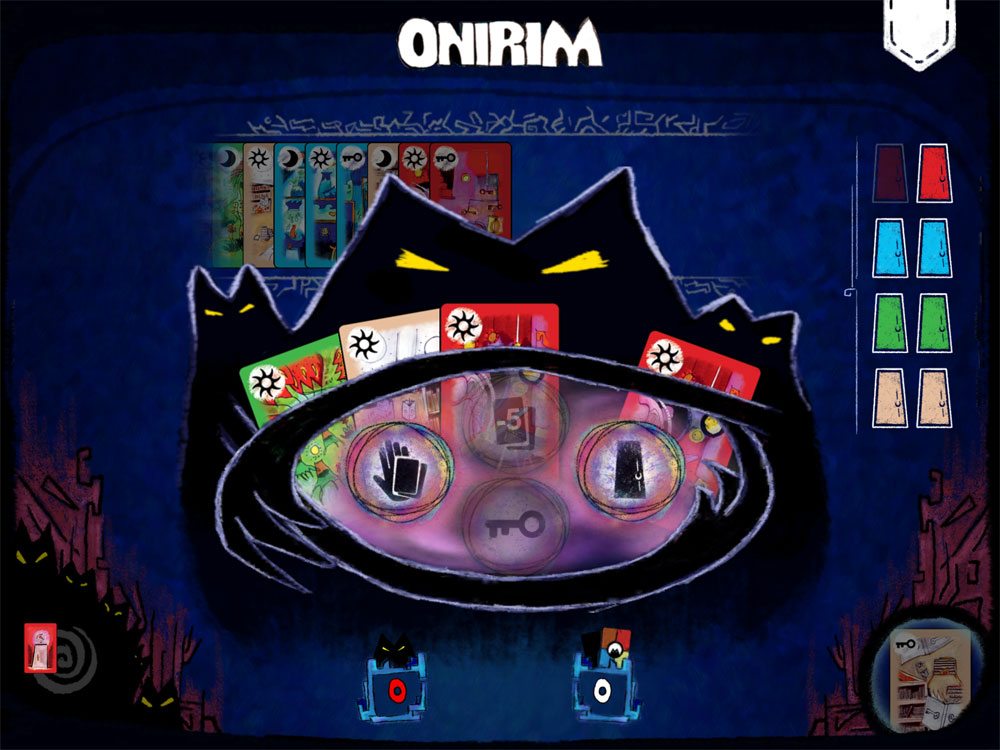 Finally, of course, there are the Nightmare cards. If you draw one of these, the nightmare pops up and grabs your hand of cards until you choose a penalty:

Suffer the penalty, and then the Nightmare is removed from the game. But beware: sometimes when drawing back up, you may trigger another Nightmare right away! (If you discard your hand, the Nightmares are put into Limbo and shuffled back in, but with the other penalties you’ll trigger new Nightmares.) 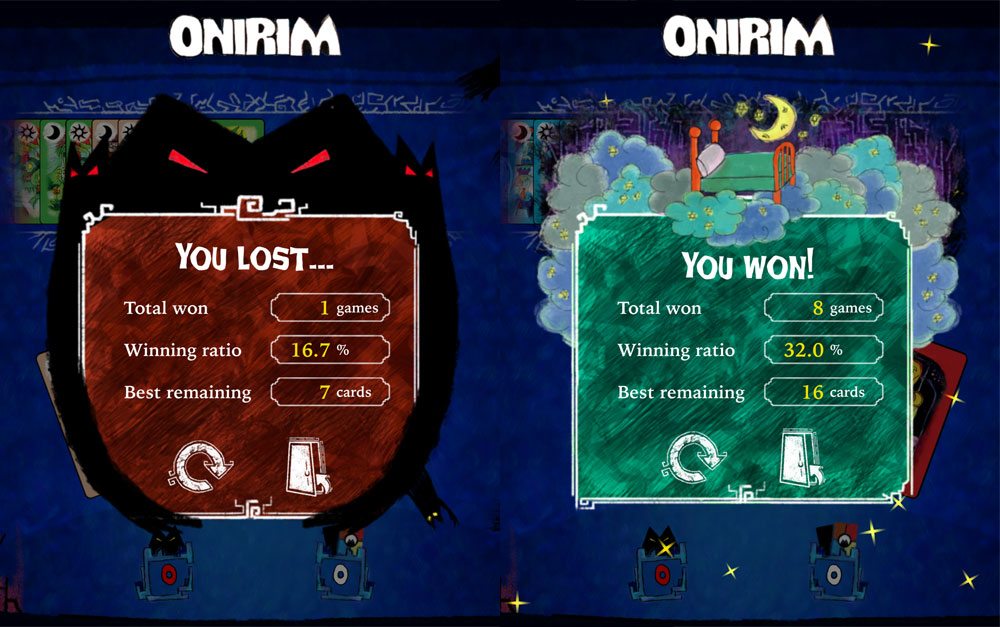 Each game takes about 10–15 minutes to play. I won the first time I played, but I failed to get a screenshot of my 100% win rate. And then I proceeded to lose game after game after game … though I have finally brought my average back up a little bit. The game does require a fair bit of luck, but you’ll have to decide how to spend your keys, when to discard cards or when to risk playing cards into the labyrinth when you don’t have a full set of three. And, of course, you have to decide what penalty to suffer each time you encounter a Nightmare.

If you enjoy the tabletop version of Onirim, you’ll find that the app is easy to play and takes care of all the shuffling and searching for you—plus, it handles penalties so you don’t forget what your options are. However, the app only has single player mode so far, so you can’t play cooperatively with another player. I’m hoping that the 2-player mode and the additional variant cards will be added to the app in the future.

The Onirim app is only $.99, so download it today and see if you can survive the Nightmares!