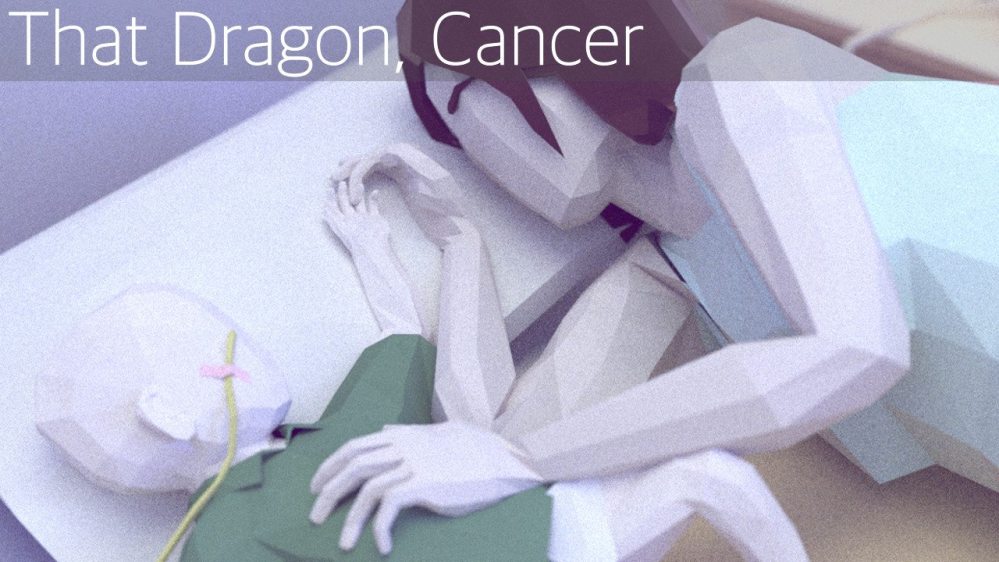 Parents need to know That Dragon, Cancer is less a game and more a downloadable interactive narrative that follows the true story of two parents trying to cope with their emotions while looking after their terminally ill son. There’s no violence, sex, or bad language, but the concepts and themes explored are sophisticated and mature, touching on such difficult subjects as whether friends and family will see the child the parents are expecting as a “replacement” for the one that’s dying, and when to accept that prayer isn’t going to save their son. Religion plays a central role as the mother and father–both caring, thoughtful, and attentive people–attempt to reconcile their son’s disease with their faith. It’s a profoundly sad game, playable by teens but clearly intended for an adult audience.

WHAT’S THE STORY?
That Dragon, Cancer tells the true story of every parent’s worst nightmare: A young child diagnosed with a terminal disease. Amy and Ryan Green–who actually lived through the tragedy depicted in the game–play digital versions of themselves, plumbing their own thoughts and emotions about the looming and inescapable death of their son, Joel, who suffers untreatable brain cancer. The game takes the form of a series of disconnected scenes–riding a wagon around the hospital, trying to soothe a crying Joel to sleep, getting news that there’s nothing more doctors can do–that act as jumping off points for players to dive into the parents’ minds, where they come to understand their hopes, fears, and faith by clicking on objects in the environment. Recordings of conversations with their other sons and the sound of Joel crying in the background add a unique authenticity to several sequences. There isn’t any winning or losing; players simply click their mouse buttons to move the story toward its inevitable end.

IS IT ANY GOOD?
It’s hard to measure this experience against other games, mostly because it’s not really a game. Players click on paintings to look at them, notes in bottles to read them, and objects such as merry-go-rounds and cell phones to interact with them, but there’s nothing along the lines of traditional video game action. Occasional mini-games pop up along the way, but you can’t really win them. Instead, they serve more as metaphors for events within the story–such as when Joel runs and jumps his way through a two-dimensional environment, doing battle with a magical dragon that can attack him but which he can’t see or hope to defeat.

It’s better to look at That Dragon, Cancer as a narrative in which we play a small role. Our goal, if we have one, is simply to understand what Amy and Ryan are going through, to feel their pain and sympathize with their struggle. And if the game succeeds in making this connection with the player–which it often does–you’ll feel the same relief that Ryan does when an inconsolable Joel finally cries himself to sleep, you’ll understand the anguish that Amy and Ryan experience trying to reconcile Joel’s condition with their religious beliefs, and you’ll take enormous pleasure in the brief moments when they’re able to make Ryan giggle in delight and seem for all the world like a normal, healthy young boy. It’s a painful, heart-breaking experience clearly intended for a mature audience, but if you’re up for it, That Dragon, Cancer could be one of the most memorable interactive experiences of the year.

RATING AND CONTENT
Recommended for ages 16 and older
Quality: 4 out of 5
Positive Messages: 4 out of 5
Ease of play: 0 out of 5
Violence: 0 out of 5
Sexy stuff: 0 out of 5
Language: 0 out of 5
Drinking, drugs, and smoking: 0 out of 5
Consumerism: 0 out of 5 (Are products/advertisements embedded? Is the title part of a broader marketing initiative/empire? Is the intent to sell things to kids?)

Get Ready for International Cook With Your Kids Day