Some games are compact little bundles of gaming joy, put together by magical elves whose only raison d’être is to make sure setup is a breeze and that you don’t just start a game but erupt into it, like Athena from Zeus’ skull.

Then there are games that, once you get the box open, make you want to go see what’s on TV instead. This could be because they are intentionally complicated to set up. (Mage Knight’s introductory mission is designed mainly to teach you how to set up the game components!) Others are so poorly organized–if they’re organized at all–that setup is a Herculean chore.

I hate to say, Imperial Assault is the later.

I got the game and most of the available add-on minis last year for Father’s Day and, while the unpainted figures were holding me back from playing, I’m working on that. Now it’s time to tackle the Bantha in the room. All the painted figures in the world aren’t going to convince me to play when I open the box and am greeted with this:

Fantasy Flight Games did provide a box insert, it was a pretty one that had the box art printed on it. You don’t see it here. You know why? It did absolutely nothing to keep the components and figures in place. Assemble the AT-ST and add in a few new figures and buh-bye flimsy insert. Lucky for me, there’s a vast gaming community out there, many of them with much more craft and architectural skill than I could ever hope to muster. With a quick Google search, I found the Esoteric Order of Gamers’ plans for an Imperial Assault insert that would not only house the components, but would keep everything neatly separated for quick setup.

I gathered my components: 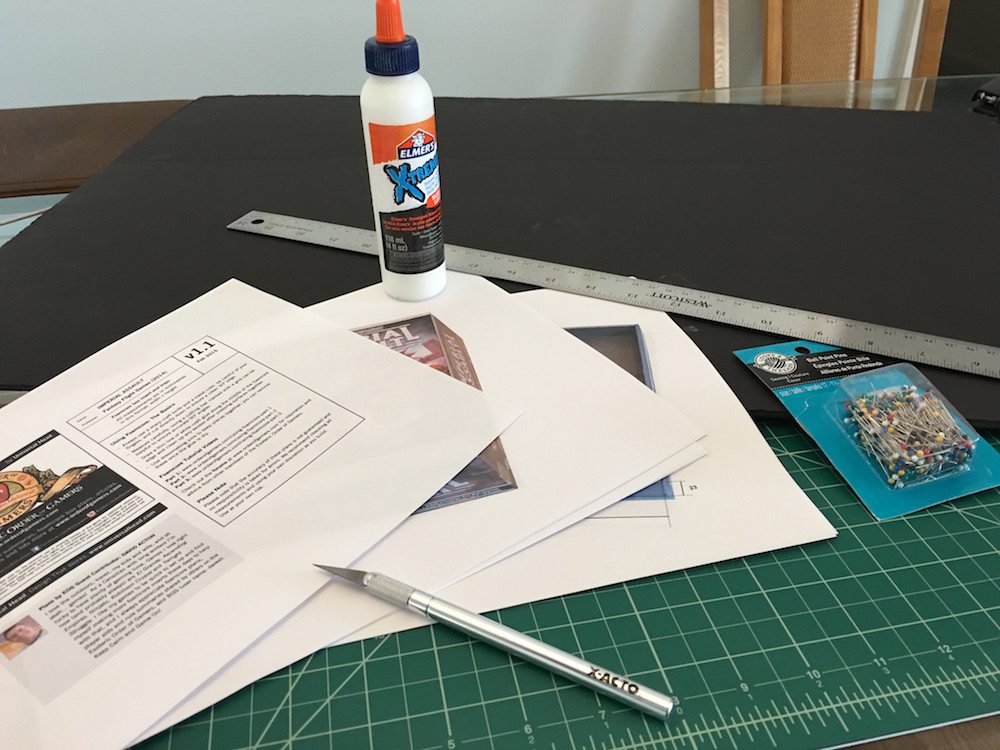 And failed miserably. Those two pieces of foam board? Chewed up like Hannibal Lecter’s last supper as a free man. While the plans were fine, I quickly discovered that doing the pieces as I went along left me with cuts that were rarely straight. I also had the wrong tool for the job. X-Acto makes great hobby knives, but your inclination with this blade is to jam the point in and pull it across. This results in jagged, uneven cuts. Once I started in on the smaller interior wall pieces, I was lucky if I got something that even remotely resembled the neat rectangle I was trying to excise from the foam. 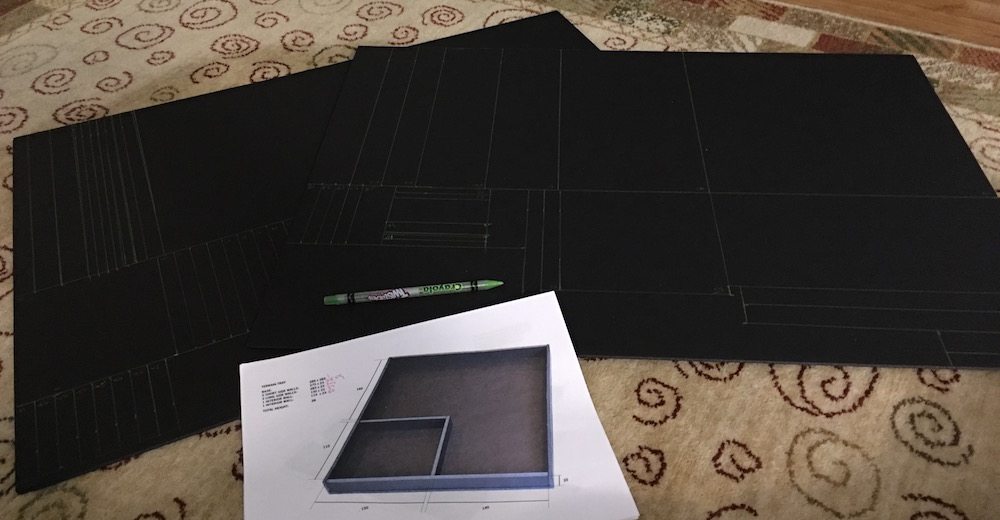 So it was back to the drawing board, literally. I grabbed a new knife (a utility knife like this one–it’s better at cutting long straight lines in cardboard, and the blade keeps you from cutting at an angle). And this time, instead of just hacking at the board willy-nilly, I mapped out the pieces I needed, numbering them as I went along. If you’re comfortable doing things on the fly, this step is probably unnecessary, but I knew this would be a multi-evening project for me, so I did this to maintain my sanity later. 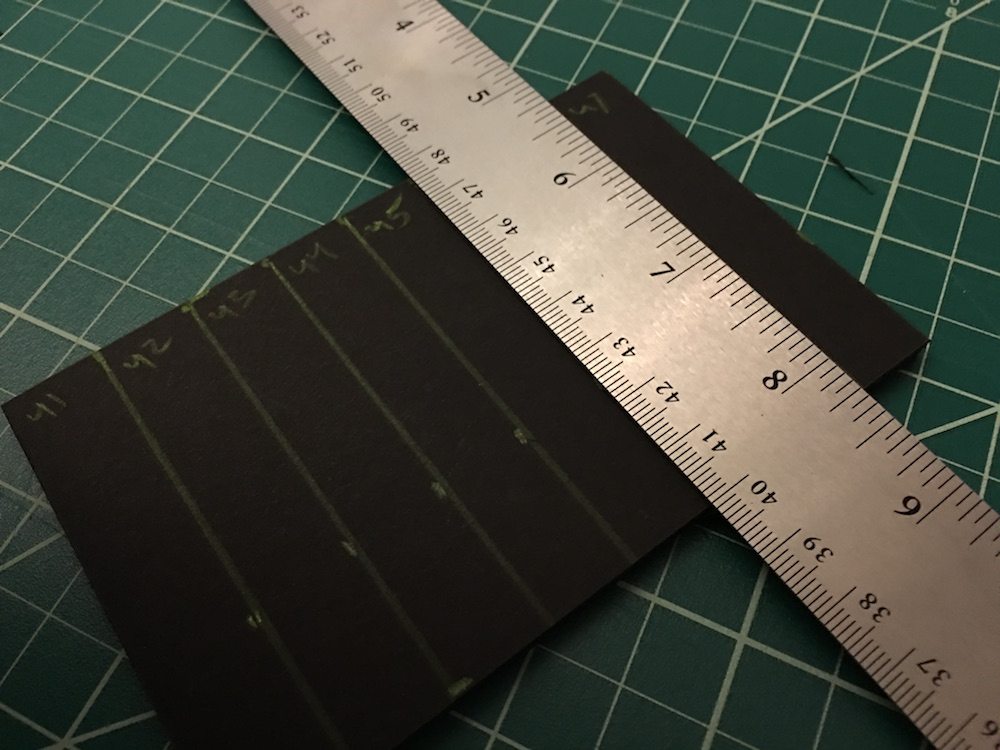 Now, the fun part, the cutting! This went pretty quickly and easily with the new blade. A couple of tips:

At the end, you’ll have a little pile of clean-cut parts, all ready for assembly.

Then it’s just a matter of following your plans, glueing and pinning the pieces together, and trimming where you need to trim. Sometimes even the best plans go awry and pieces will be too long or too short. Luckily, I had a lot of foam board left over from my failed first attempt! You’ll want the cards handy when you get ready to finalize a few of the trays; being able to ensure your spacing is correct with the actual components before you start glueing is invaluable. Speaking of glue, the Elmer’s Extreme Glue I used turned out to be fantastic. My son, in his infinite wisdom, was tossing the football around the house the next morning and managed to connect solidly with my pinned together insert–there wasn’t a piece broken or out of place.

Then you just need to place everything in its spot and sit back and wait patiently for your next play session!

Incidentally, this easily housed the entire first wave of expansion figures, minus the extra cards and scenario inserts. I’ll have to come up with another way to store those. While I could definitely fit more regular-sized minis in the box, if I get the Twin Shadows or Return to Hoth expansions, I’ll create inserts for those boxes to house their oversized figures.

The next step to upgrading the game will be finally getting some paint on the minis. But for a novice like me, getting this many figures painted is a daunting task. Luckily, I’ve got some friends at Army Painter that are going to help me with that. Stay tuned! 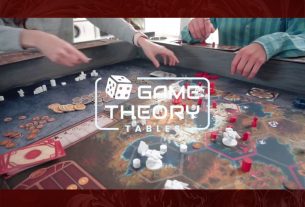 Final Days to Save in the Origins Game Table YouStarter Campaign