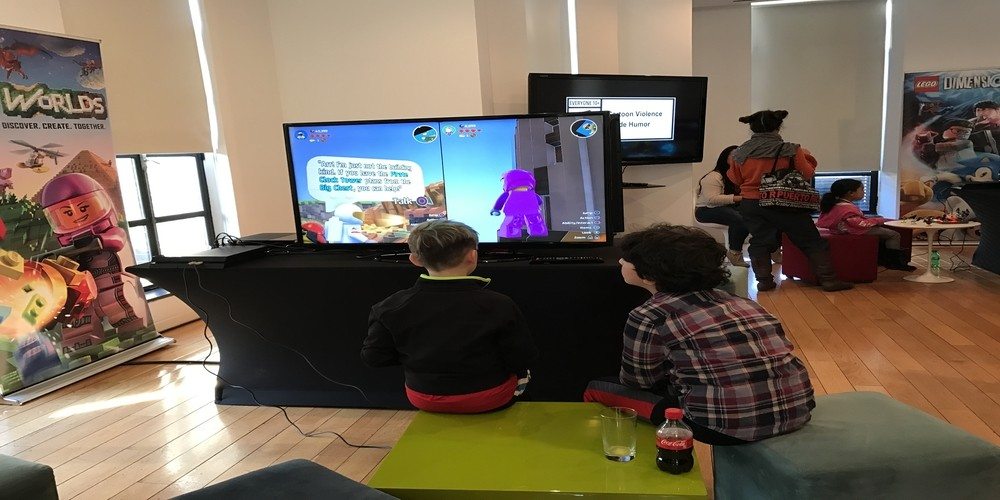 On Wednesday March 22, a large group of parents and children gathered in a New York conference room to play the new LEGO video games LEGO Worlds and LEGO City Undercover. Stepping through the door, I looked across the room to see GeekDad Michael Kaufman smiling and talking to one of the organizers.

As my son and I made our way around the room, we settled on the LEGO City Undercover game. Michael’s son joined mine, and the two became fast video-gaming friends.

LEGO video games are how gaming should work. LEGO has done everything right with its games over the last howevermany years they’ve made them. My family has played all the licensed LEGO video games ever made. My husband bought them before we even had a child. Talk to my college students about them? They’ll sheepishly admit to loving them as well.

Why? Because these games help kids do everything the research says games should do. For gaming to be effective for kids, the video game choice and usage matters. LEGO video games do this beautifully. The games are co-operative. Co-operative gaming has proven to be most effective at helping children learn prosocial behaviors, whether as FPS games or cartoonish games. In addition, games that allow kids to cathartically express a sense of control over their digital landscape when they cannot always in real life help them feel better about themselves. LEGO video games do both of these. Worlds, a game in which players explore new terrains while building and interacting creatively gives this sense of power and control. Two players can work together or independently to go on quests. These quests earn new characters, new items, and gold bricks. My son loves to play tag in the worlds running around while we chase him. In addition, I can safely say there is no greater catharsis on a bad day than smashing a bunch of LEGO bricks and watching them fly around the screen while getting an opportunity to earn (fake) money in the process.

LEGO City Undercover, a revamp of the previously popular Wii game, has a more linear plot. LEGO gamers will recognize the mission format. However, unlike the previous games, this one has a single character whose outfits allow him to change his behaviors and skills. Normally in the LEGO games, different characters are what change the ability to interact within the world. My son loved this game even more than Worlds, which is saying something because he particularly loves Worlds.

These kinds of events are an excellent way to talk to the developers of the games. For example, we talked to the LEGO City Undercover developer:

We also had a great opportunity to discuss how non-Minecraft the LEGO Worlds game is and what went into developing it:

A Google-a-Day Puzzle for Wednesday, May 4th