In 2010, I played my first deck-building game ever: Thunderstone.

Now, I have to admit it wasn’t love at first sight. The rulebook wasn’t great and assumed you already understood the basic concepts of deck-building from Dominion (which I hadn’t played); the cards had tiny text and were hard to read. But once I actually figured out how to play it, both Thunderstone and the deck-building genre as a whole quickly became one of my favorites. Since then, Thunderstone has had many expansions—some stand-alone sets, a Numenera version, and then a version called Thunderstone Advance that combined the best parts of the game in a format that was easier to learn.

Next week, AEG is launching a Kickstarter campaign for Thunderstone Quest, a completely overhauled version that aims to bring the game to a new audience. I haven’t gotten to play it myself, but I have seen a draft of the new rulebook and some of the artwork, and I really like what I’m seeing. Although I don’t generally do Kickstarter announcements, I’m making an exception here even though I didn’t get a chance to play a prototype because Thunderstone holds a special place in my gaming heart.

I won’t get into too many details here, but I’ll give a quick overview of what Thunderstone Quest is about, and then outline the differences between this and older versions for those of you who are familiar with the originals. It’s a total reboot, so although it retains a lot of the core concepts from the previous versions, it is a different game and isn’t compatible with the old sets.

At a glance: Thunderstone Quest is a fantasy-themed deck-building game for 2 to 5 players, ages 14 and up, and takes 45–80 minutes to play. (That’s based on information from BoardGameGeek; the draft ruleset I received implies up to 4 players, and I wouldn’t be surprised if a variant solo mode is added later.) Based on theme and complexity, I think probably teens and up is a good recommendation, though kids who have experience with deck-building games may be able to play this at a younger age.

I don’t have a full components list, but there will be a game board, lots of cards (as you’d expect from a deck-building game), and a lot of tokens—XP, pouches, wounds, ropes, and other items. I’ve seen a few of the sample card layouts and it does look like the numbers on the cards are significantly larger than they have been in the past, which is nice. Some of the text may still be smaller than preferred, but that may always be an issue with card games that involve a lot of text. 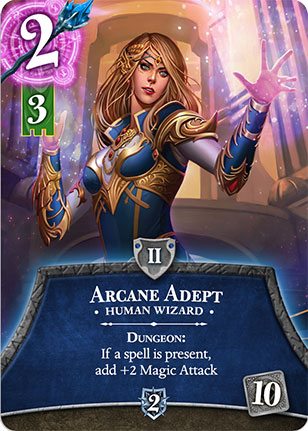 The object of Thunderstone Quest is to score the most victory points by leveling up your heroes, amassing treasure, and defeating monsters, including the dungeon’s Guardian.

You start off the game with a basic deck of cards: 6 Adventurers, 2 Daggers, 2 Lanterns, 1 Thunderstone Shard, and 1 Potion of Healing. As with most deck-building games, you have your own deck and discard pile, and you will acquire and remove cards as you play the game, making your deck more powerful. You also get a guild sponsorship and side quests. At the beginning of the game, you choose a guild sponsor (Fighter, Wizard, Cleric, or Rogue)—when you fulfill that sponsor’s terms, you flip over the sponsor card, and then you can get XP for completing the quests. You also have three face-down side quests, which may be end-game conditions or something you can accomplish during the game. These can award you points, as well as giving you access to powerful artifacts or cursed heroes.

Each turn, you have three options: Village, Dungeon, or Prepare. 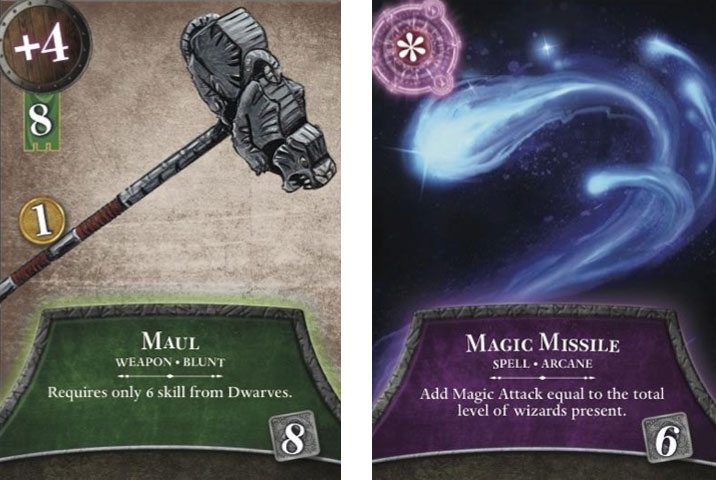 The Village is where you go to improve your deck—you’ll use the gold generated by the cards you play to purchase additional cards or equipment tokens: iron rations, torches, pouches, and ropes. Equipment tokens are one-time-use items that you can use any time, rather than having to draw them from your deck. You can also heal one wound in the Village for free, and you can spend XP that you’ve earned to level up heroes. Adventurers can be turned into Level 1 heroes. Each time you play, there are four different stacks of heroes in the Village—a cleric, a fighter, a rogue, and a wizard—and each one has three possible levels. You can recruit a hero by paying an amount of gold, or level up using XP. 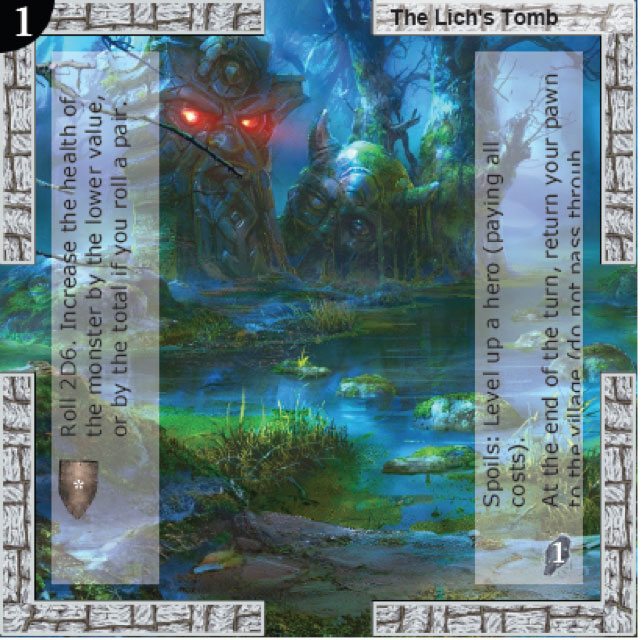 The Dungeon is where you’ll explore and fight monsters. In Thunderstone Quest, you actually have a pawn that marks your location, and the Dungeon is laid out in a series of rooms. During set up, you’ll pick some random rooms to put into the Dungeon. There are three levels of rooms, and there are three levels of monsters corresponding to those rooms. The room tiles may have their own effects and penalties, and then the monster cards are placed on them. Since the room tiles and monsters will vary from game to game, this gives even more variety than the original game, which had a single randomized monster deck. You’ll spend light from your cards and torch tokens to move from one room to another, and then fight the monster where you finish. 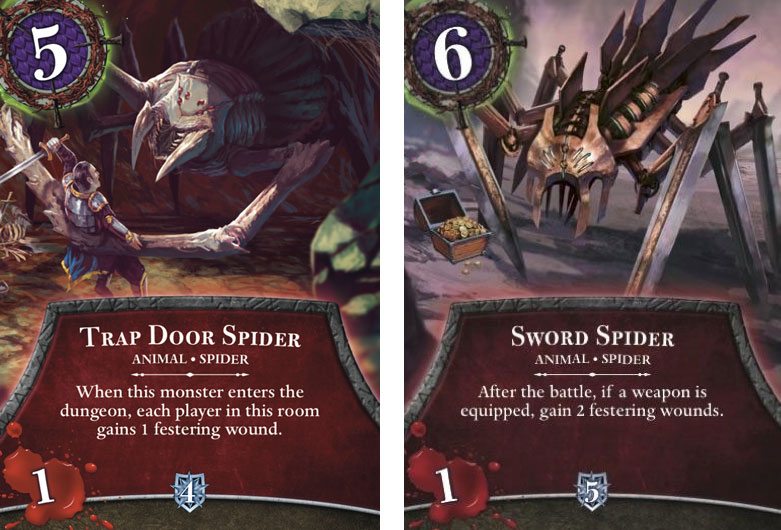 The monsters themselves have a strength that must be met using your heroes, equipped items and weapons, and spells. Each hero can handle only a certain number of weapons based on their skill level, and may also have special abilities that apply in the Dungeon. Overcome the monster, and you’ll gain XP or even treasure—but you may also gain wounds even if you win. The more wounds you have, the fewer cards you get to draw for your next turn.

Once you enter the Dungeon, you may continue to explore and move around from room to room on future turns, delving deeper to get to tougher monsters, or staying closer to the entrance to build up XP fighting easier monsters. If you ever return to the Village, you’ll have to re-enter the Dungeon through the Wilderness again.

The last thing you can do is Prepare: you go to the Village, heal up to 2 wounds, and then choose any number of cards to put back on top of your deck (to be drawn for the next turn). Preparing just helps you set up your hand for your next turn.

Mixed into the three monster decks are Dungeon Keys, which are set aside when they’re drawn. Once four keys have been drawn, the Guardian arrives in the wilderness and triggers the ending of the game. The Guardian is the boss monster—once it appears, every player has one more turn, so that everyone has an opportunity to fight the Guardian or do something else before the game ends. Once the game ends, you score points for cards in your deck, completed side quests, and XP.

There are some minor rules tweaks here and there, like replacing “strength/weight” with “skill” for equipping gear to heroes, but I’ll focus on some of the more significant changes.

One of the biggest is certainly the way the Dungeon works. In the original game, you shuffled together a bunch of monsters, with a Thunderstone (or Thunderstone Bearer) shuffled into the bottom portion of the deck, and then the monsters would populate a small dungeon row in which you had to use light to overcome attack penalties—the darker it got, the more light or attack you needed to use. Unfortunately, the randomized nature of the deck meant that sometimes you’d end up with very difficult monsters front-loaded, and everyone spent a lot of time in the Village just buying cards and ignoring the Dungeon until they felt ready.

Now, the three levels of monsters are in separate decks, and there’s a physical layout for the Dungeon. The rooms have specific abilities and effects, and you know that you’ll encounter more difficult monsters deeper in the dungeon. Light is used for moving from room to room, but generally doesn’t affect the fight itself. So you could go after easier fights earlier in the game if you want, or spend some time building up and going straight for the big monsters.

The equipment tokens are also a new thing. Rather than buying iron ration cards and torch cards, now you get tokens that can be spent on any turn. It makes it easier to accomplish something without having to have the perfect combination of six cards in your hand. In the original version, you might have a fantastic hero, the perfect weapon, and enough light to go fight a particular monster, but if you never drew them all at the same time, you didn’t have a chance. Now, your torches and iron rations are always accessible, but they’re single-use. Ropes let you draw cards, and pouches are worth 1 gold.

The side quests and guild sponsors are also new, and I like the idea of having quests or achievements that you work on throughout the game, earning you more points or other rewards. Speaking of rewards, there are new Treasure cards as well—you can buy a random treasure in the village for 10 gold, or you might get treasure by killing particular monsters. It’s a new way to get powerful heroes, items, spells, and weapons that aren’t typically available from the Village.

I’m pretty excited about Thunderstone Quest. It looks like it still keeps a lot of the things I loved about the previous incarnations and makes some great improvements that will get the game going more quickly and prevent the feel of “grinding” before you can enter the dungeon. 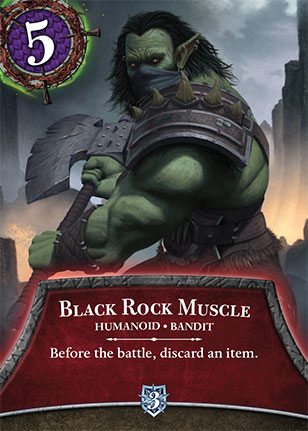 In addition, there’s a chance to unlock a mini-expansion called “The Bandits of Blackrock” before the campaign launches. Visit this page for more details: if AEG gets enough newsletter subscribers and Facebook likes by next Tuesday, the expansion will be unlocked for all backers. 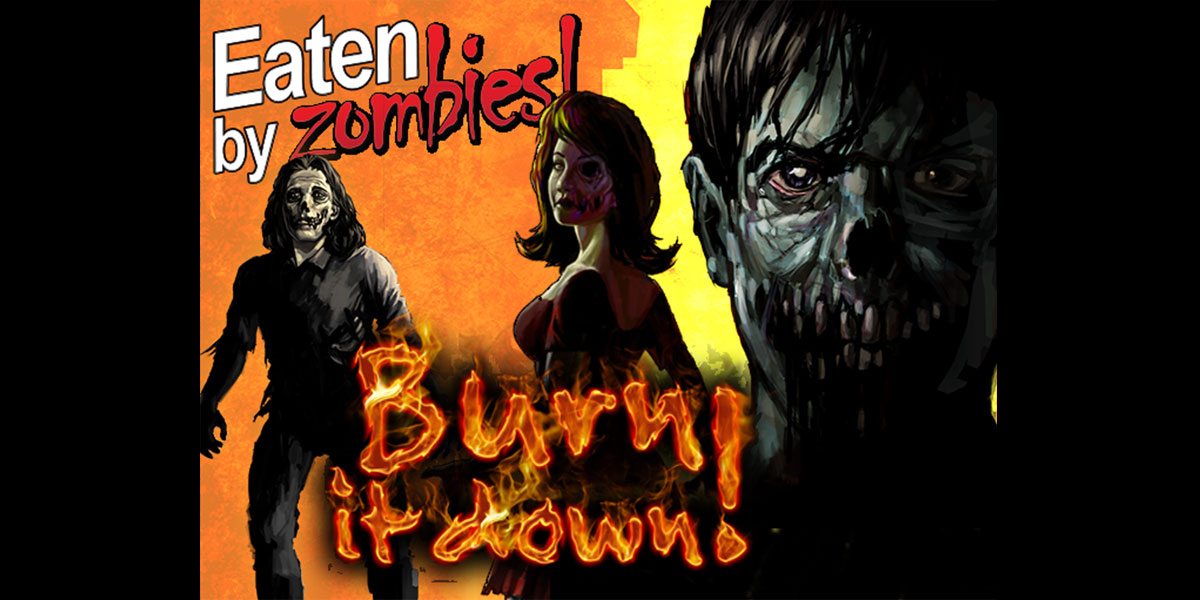