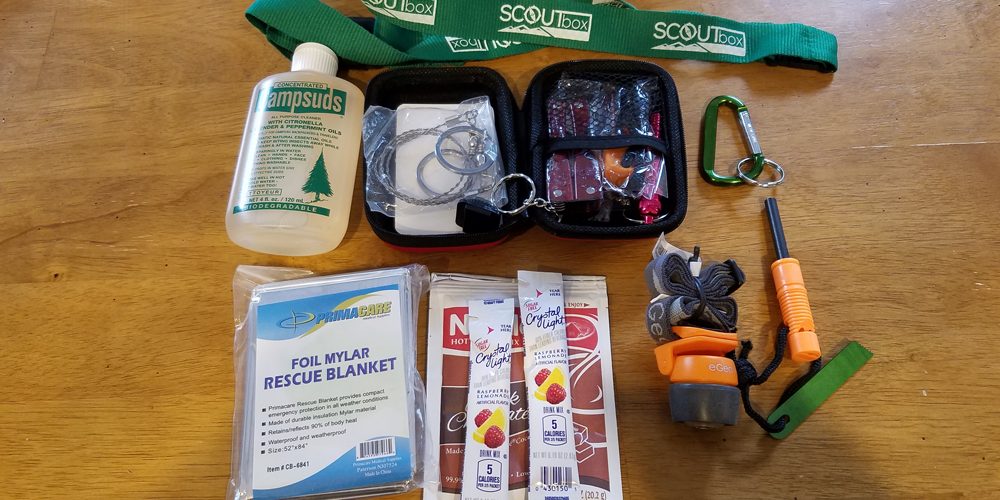 Monthly subscription boxes are all the rage now, offering a range of products for a set fee each month. It can be kind of fun if you’re in to the theme, getting this box of stuff you’ll almost certainly like without knowing exactly what you’re getting.

A few months ago, I heard about ScoutBox, a subscription box targeted at Scouts, so I reached out to them to see what they were about. They responded that they would be happy to send me a box so that I could take a look once the service actually went live. My box arrived yesterday, and given that I really had no idea at all what to expect, I was pleasantly surprised by what they packed into the small USPS flat rate box.

The contents I got:

All of the components seem to be fairly high quality. They aren’t the best of these products on the market, but they aren’t the cheapest, either. Certainly, they are the kinds of things you would buy for your Scout before sending him off to summer camp.

However, the box they sent, which they call the Mystery Box, is not representative of what will be in the monthly subscription boxes. In fact, the creators of ScoutBox let me know via e-mail that “[t]he size and contents of all of our Mystery Boxes vary for every batch – we’ve shipped more than fifty hammocks, 3 Fitbits, $100 bills, free annual subscriptions to SCOUTbox, and a host of other “big ticket” items. These were dispersed throughout the 800 boxes that we sold along with other outdoor gear and branded apparel.”

When I asked for more details on the subscription, they said that “the monthly subscriptions will be a different format. Each month we plan to have a theme where we curate items within that theme. Those boxes each month will be the same and not have the random assortment of things like the Mystery Boxes did. So if you sign up for two subscriptions they will be the same.”

They also said that they hope to eventually offer boxes targeted at Girl Scouts, Venture Crews, and adult Scouters, but initially the boxes will be targeted at Boy Scouts–the program for boys aged 11-18. (Ventures, by the way, is a co-ed program run by the Boy Scouts of America for youths from age 14 through 21.)

Overall, I was quite impressed by this initial offering from ScoutBox. I definitely plan to look at the subscriptions, and will be talking about these with the other Scouting families I know. Subscriptions aren’t available yet, but they are building their mailing list for people to be notified when they are.

8 thoughts on “ScoutBox: The Monthly Subscription Box for Boy Scouts”