Back in 1986, I had a tendency to ask my local comic book shop (Sincere Comics in Pensacola, FL) for recommendations on new titles. One of the employees, Don, would often put me on to interesting titles. On one particular visit, he was quite vocal about the first issue of a book called Watchmen. The cover was unusual–a flow of what appeared to be blood behind a yellow Happy Face button with a red smear looking like the hand of a clock on its face. I took a quick glance at the first few pages and was quite impressed with the match-up of artwork with the text and dialogue. I bought it and headed home to finish it along with whatever else I picked up that day.

I have no memory of the other comics I purchased that day, but I can tell you that the 30 days or so between the release of each of the next 11 issues felt like forever… especially the final issue. Just before a new issue arrived, I would go back and read the currently released issues. By the time the series wrapped up, I felt confident I had caught all the little Easter Eggs (such as minor characters interacting on a street in the distance while your attention was focused elsewhere or names being dropped in a newspaper clipping that would pay off in a later issue). Of course, I was completely wrong. As the years went by (and the popularity of the internet grew as a way for geeks to get deeper into their interests), I’d find again and again some bit of trivia about Watchmen that I completely missed.

Watchmen was an incredible story, and even coming up on 30 years since the final issue was released (October 1987), I find it a worthy 12-issue series to revisit every now and then. I’m familiar with the movie and I read the prequel comic series, but I’ve never played the video games.  I’m aware of the current DC Universe Rebirth plot that pulls the Watchmen into the mix as well as the discussions about a new TV show, but for me… the original 12-issue story will always be enough.

But for those of you looking for a true grasp of the Watchmen characters and universe and anything and everything related to Moore’s world, I don’t believe you will find a more comprehensive examination of the subject than with Rich Handley’s new Watching Time: The Unauthorized Watchmen Chronology book from Hasslein Books. 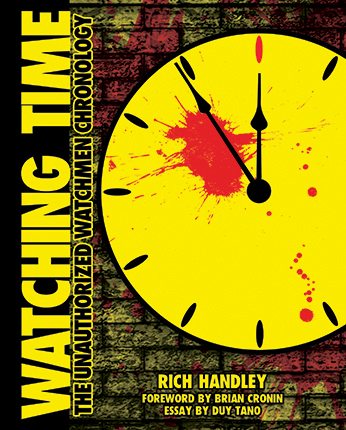 Tucked into the 370-page softcover, you’ll find some outstanding essays, a timeline that is beyond crazy in its scope, dozens and dozens of sources (complete with four-letter codes for use in referencing), and an incredible cover collection from the comics, DVDs, games, and more that will be useful to collectors everywhere. If you’re looking for specifics, here’s more details from the book’s description:

The timeline alone is incredible, referencing sources such as SCR2 (Unfilmed screenplay draft: Charles McKeun) or MOBL (Watchmen: The Mobile Game) or even CLIX (HeroClix figure pack-in cards). I’m not kidding… there are over 50 sources that Handley has pulled from that provide trivia such as details of the exhibit at the Smithsonian (RPG3 DC Heroes: The Watchmen Sourcebook) or conflicts between the film (FILM) and the original comic series (ALAN).

If you’re a fan of the original Watchmen series, the book will open your eyes to many secrets and behind-the-scenes details that you’ve likely never considered (or even noticed). Add in sources such as the film, the prequel series, video games, and others, and you’ll find your head swimming with how much research Handley has done here. After finishing the timeline, I’m now a few issues into my (slow) re-reading of the original series looking at the story from different angles, all thanks to the care and detail that Handley is now offering to the Watchmen fans around the world. 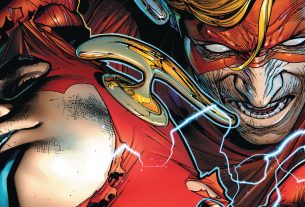 10 Geeky Movies to Raise Your Kids On