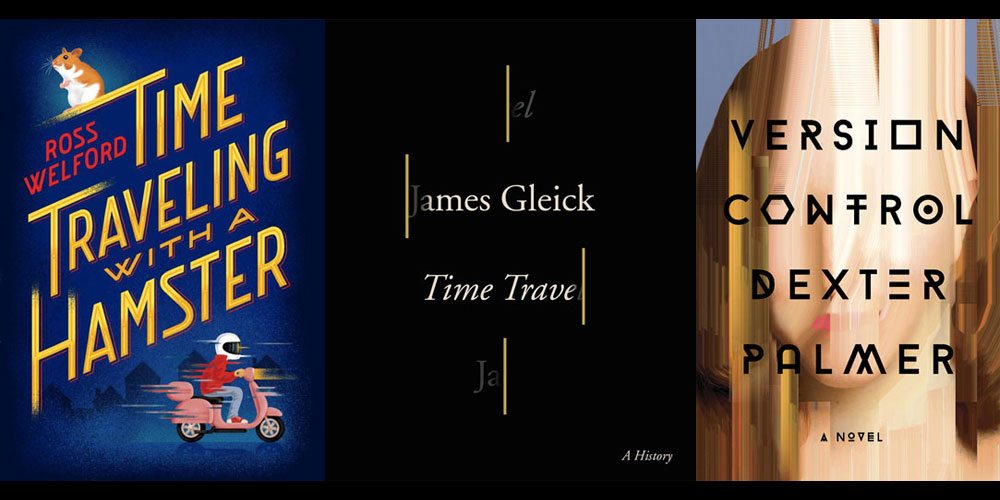 What time is it? I’m writing this in my right now, but you’ll be reading it in my future. Or, you’re reading it in your right now, but I wrote it in your past. Writing is one of the first time-shifting technologies, moving communication out of real-time, and allowing communication over larger distances. And then (as James Gleick explains) telephones made long-distance communications real-time again. And then came answering machines (time-shifting) and then texting (real-time). Our relationship with time is already complex—so why do we further complicate things with stories about time travel?

Maybe we’re uncomfortable with our present and wish we could change it. Maybe we’re optimistic about the future and can’t wait to get there—or pessimistic but we want to get a glimpse for ourselves. Maybe we just want to see some dinosaurs. Whatever the reason, it seems we never run out of stories to tell about manipulating time. 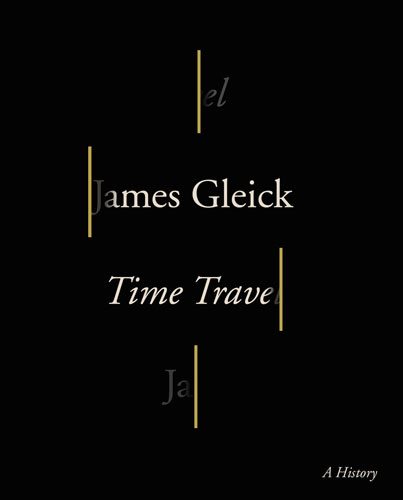 I mentioned last month that I was reading Time Travel: A History, and I’ve finally finished—and loved it. Although I’d heard of Gleick before, this is actually the first book of his that I’ve read, and I thoroughly enjoyed it. His exploration of time travel is thorough and quite broad: books, movies, TV shows, as expected—but also physics and language and even theology. Gleick explores how our conception of the universe through science has affected our language and literature, and vice versa.

It’s also interesting that many of the stories from the turn of the 20th century were about the future. At that time, people thought about going to the future: their world had seen incredible shifts and they were eager to dream about the changes to come. In contrast, modern time travel stories often take us back to the past—either to relive history or to attempt to change it. We are living in the future, and it seems ordinary. We don’t think the future is worth visiting—either it will be dystopian, or it will be a lot like what we experience now. We have regrets.

Gleick explores time travel tropes like paradoxes. Why does everyone dream of going back to kill Hitler, and why doesn’t it work? Can an effect precede its cause? Why is it so hard for us to talk about time—we mix metaphors. Nothing is consistent. Nobody really seems to be able to give a good answer to the question “What is time?”

I thoroughly enjoyed Time Travel and I’m looking forward to reading some of the stories referenced in the book—there are so many I haven’t read or hadn’t even heard of before. The one wish I have is that the book had more footnotes or endnotes—Gleick tosses out references and quotes and allusions on every page, and many of them aren’t explained beyond a name (or just a character’s name), and it would be nice to place all of those into a larger context. But other than that, this book is an entertaining and informative read, and also a fantastic resource for anyone interested in time travel stories—I’d recommend it particularly if you’re thinking about writing your own time travel story. 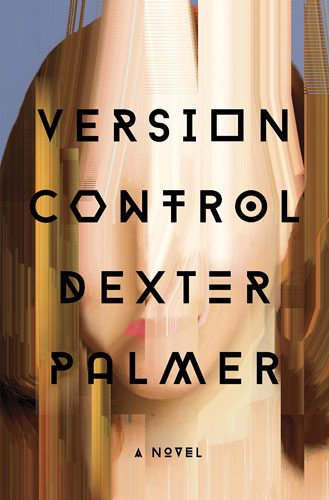 I can’t remember where I first heard about this one, but I ended up picking it up at the bookstore when I heard it had something to do with time travel. In this slightly-future world, there are automated cars (but not everyone uses them), and goggle-screens are common (but not ubiquitous), and some physicists at Stratton University have been working for years on a causation violation device. (Don’t call it a “time machine.”) And in this world, Rebecca, the wife of the lead physicist, has been feeling that things aren’t quite right with the world: maybe things just don’t taste the way they’re supposed to, or the President just seems like he isn’t actually the person who’s supposed to be the President.

The book follows a wide cast of characters and touches on a variety of subjects: race relations, science and academia, alcoholism, marriage and parenting, technology, women in science … a lot of it before you ever even get to the part about time travel. But is it time travel? Palmer’s version of time travel is fascinating and different from other stories I’ve read before: his “don’t call it time travel” time travel has new rules and restrictions on how it works. I love the way that certain beats and phrases reappear in different contexts, like a recurring motif in a song. I don’t want to give away what happens, but this book does what all great science fiction does: it explores our real world through the lens of its imaginary world, and does so in a way that will make you uncomfortable and unsettled because it makes you think.

At nearly 500 pages, Version Control is a long read, but a compelling one. It kept me up way past my bedtime three nights in a row, but it was worth it, and I’m still mulling over a lot of the ideas in the book. 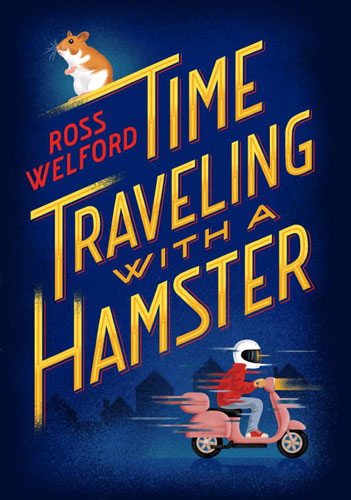 Time Traveling With a Hamster by Ross Welford

This one is a middle-grade book, about a twelve-year-old who goes time traveling with a hamster named Alan Shearer. On his twelfth birthday, Al Chaudhury is given a sealed letter from his father, who died when he was only eight. The letter sets him to an important task: travel back in time to save his father using a time machine that his father has hidden away. But there’s a problem (other than, you know, the whole time travel thing): his family has moved in the four years since his father’s death, so the time machine is now hidden away under somebody else’s garage.

Mr. Chaudhury’s time machine is an odd-looking thing: a zinc gardening tub, with a laptop and a few cables. But it works, and soon Al finds himself jumping back to 1984 and meeting his father as a kid, hoping to set off the chain of events that will prevent his premature death. But this time travel story has its own rules: you’ll never run into yourself, because (as Mr. Chaudhury has discovered) there seems to be a “no-doppelganger” rule in effect: you simply cannot travel to another time where another version of you currently exists. It’s why Al has to be the one to save him—because Al’s mom and grandfather were already alive in 1984 and thus can’t travel back to that time. But there are also other consequences of that rule that play out in interesting ways.

There are also other unintended consequences of time travel. As Al goes back in time, he sets off chains of events that alter the future in unforeseen ways, and it does make you wonder how things are going to turn out in the end. (Though, this being a kids’ book, you do figure that there will be some sort of happy ending, or at least some valuable lessons learned.)

And why the hamster? Well, a few of the times it’s sort of accidental, but at some point I really didn’t know why Alan Shearer was along for the ride, other than to justify the title of the book. Actually, one of the biggest questions I had about this particular story’s internal consistency was why the “no-doppelganger” rule didn’t seem to apply to the hamster—was that intentional, or accidental? Still, it’s an entertaining story told in a fun voice, and kids will enjoy following the twists and turns as Al jumps back and forth in time.

These next two are older titles that I happened to come across while I was looking for time travel books. 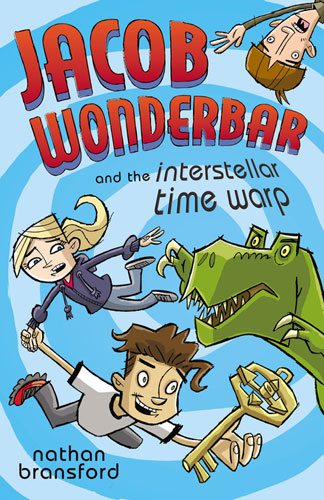 Jacob Wonderbar and the Interstellar Time Warp by Nathan Bransford

This is actually the third installment of the Jacob Wonderbar series—I haven’t actually read the first two but had gotten a review copy of this one, so I gave it a shot anyway. There’s clearly a lot of stuff going on that refers to previous books in the series that I’ve missed, but this particular volume involves time travel. Jacob Wonderbar is on his way back home from outer space—but finds himself back on earth 50 years in the future somehow. When they confront Mick Cracken, Jacob’s arch-rival who is now an adult, he reveals that Jacob’s dad is lost in time, and he’s the key to figuring out this whole mess.

But it’s clear that Mick knows more than he’s letting on, and Jacob and his friends hop around in time, visiting dinosaurs, Napoleon, in search of Jacob’s father, who has been missing for years after his parents separated. In this version of time travel (which skips a lot of the science and just goes with a magical-science-y key), there’s some consistency in the overlapping timelines but also a whole lot of wackiness. There are also some real lessons about changing the past, when Jacob has to consider who he has become because of the difficulties he lived through.

I probably wouldn’t recommend this one quite as much as a stand-alone book, because I think having the context for some of the characters would be helpful, but the time travel plot at least is self-contained. 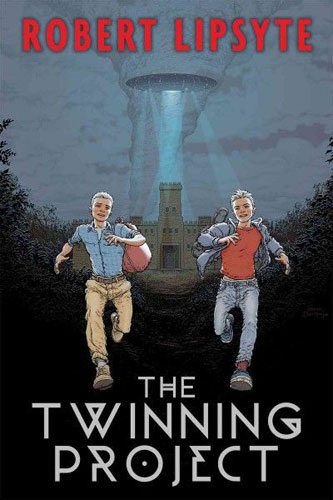 The Twinning Project by Robert Lipsyte

Tom has an imaginary twin brother, Eddie, who lives on another planet (just like Earth, but 5o years in the past), and is everything he isn’t. Tom’s a rebel who has trouble making friends, and Eddie is a sports-playing popular kid. Tom thinks he’s probably a little bit crazy, but he enjoys “talking” to Eddie and Eddie seems to talk back.

The twist, of course, is that Eddie is actually very real—there are twin planets, created by alien scientists to study the evolution of human society, and they’ve decided the experiment has run its course and are ready to destroy both planets. Tom and Eddie end up switching places, as part of a plan to save the Earths.

It’s not exactly time travel—it’s more like jumping between parallel universes—but it does feel a bit like a form of time travel. Tom is going back in time, and Eddie is going forward in time, with all the disorientation that entails because of their unfamiliar surroundings. It reminded me a little of the Duplexity series I reviewed earlier this year, another story about two worlds, with doppelgangers swapping places. I think in general I prefer time travel to this sort of parallel-world idea, but it was an interesting plot to puzzle out.

So, that’s it for the time travel this time. I’ve got a couple more books in my queue to read, but some of them aren’t out until later, and some of them I just haven’t read yet! Want more? Check out these two previous Stack Overflow columns: “Double Lives and Second Chances” and “It’s About Time.”

Disclosure: I received review copies of these books except Version Control, which I purchased myself. 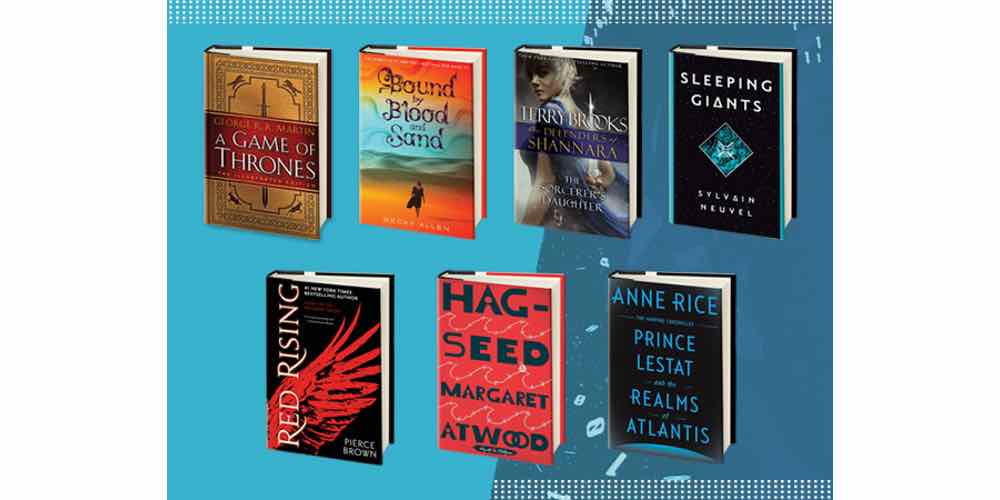 Unbound Worlds Is Giving Away a Sci-Fi/Fantasy Library