Last September, I realized that my first Family Night Storytime of the fall would fall on the 22nd: Hobbit Day, the birthday of both Bilbo and Frodo Baggins.

I couldn’t just let a party excuse like that pass by unacknowledged! Hobbits are important to me! I’m built like a hobbit, to start with. I’m fairly certain I could fit into Shire society exceptionally well, with their laid-back food-loving ways. In the seventeen years I’ve been playing Dungeons & Dragons I’m pretty sure I’ve not played a halfling, at most, twice. My favorite actor/number one movie star crush played a hobbit, and to be honest I’d found myself curiously attracted to all Jackson’s movie hobbits even before that. And, most importantly, I named my kid after a hobbit,* so that should count for something.

The problem was, even though our local library’s Family Night is billed as “all-ages,” the actual kids who attend average around kindergarten age. And, contrary to popular belief, Tolkien and kindergarteners don’t mix. He’s wordy. He likes filling his stories with lots and lots of backstory. He is simply not for the short of attention no matter how anxious we fantasy nerds might be to share him. Our library actually has copies of Tolkien’s obscure picture books Mr. Bliss and Farmer Giles of Ham, but neither of these is all that much less wordy or short-enough-for-a-large-group-of-kindergarteners than his Middle-Earth books. Besides, neither are about hobbits, and it was, after all, Hobbit Day. I figured a group who didn’t even know what Hobbit Day meant could probably do with a story that would explain it.

So I decided to read the first chapter of The Hobbit. It was in a Treasury of Children’s Literature I’d had as a child (and had recently gotten back from my parents), along with pictures, so it seemed a bit more appropriate for storytime than reading from the book itself. Even then, looking over it before storytime, I thought I wouldn’t be able to finish the whole chapter, and decided to just get to the beginning of the party at least, because that’s fun. But we were lucky even to meet Gandalf before the crowd became too antsy.

No matter. The most important part of a Hobbit Party isn’t the stories. It’s the food.

This is the spread for our party. This is a really sparse spread for a true Hobbit Party. But when I normally get eight kids (with a grownup or two each) at the very most for Family Night, I had to narrow the options a bit. An apple tart was a must. But beyond that? Nearly every source I consulted said that every hobbit feast must include pickles and mushrooms. Well, pickles were easy– I just grabbed a jar out of the fridge. But mushrooms? I don’t even like mushrooms. I wasn’t going to invest in a food that few of my guests were likely to even try, at least if I didn’t want to eat the leftovers, either. And I needed something handheld and snacky. Hense, cupcakes in the shape of toadstools. They may look more Super Mario than Middle-Earth, though. Finally, I found a lot of crackers and hummus in the break room,  leftover from a meeting earlier in the day. Why not? As it turned out, the crackers and hummus—or at least the crackers—were pretty popular. The cupcakes were most popular of all. I think I was the only one to have any apple tart, though, and no one touched the pickles at all. No matter. I just took them all home again!

One of the perks of children’s librarianship is that you can get away with cosplay at work. Most proper hobbit costumes involve waistcoats and short trousers, but why, I thought, couldn’t I be a female hobbit? I had a dress I’d made that was a remarkably hobbity green with flowers. I went at my hair with a curling iron and added some ribbons. There! That was a look to make Rosie Cotton envious!

A month and a half before Halloween, costumes were popping up all over the place in stores. But would you believe how hard it was to find a pair of pointy ears? I finally had to drive all the way up to a large seasonal Halloween store in Pittsburgh, and even there, in the whole store, there was just one pair. So I bought it. I took a picture for a friend who demanded an ear pic after I posted the above hair pics, but they didn’t fit right and kept falling off. So I stuck with my own human ears once we started. 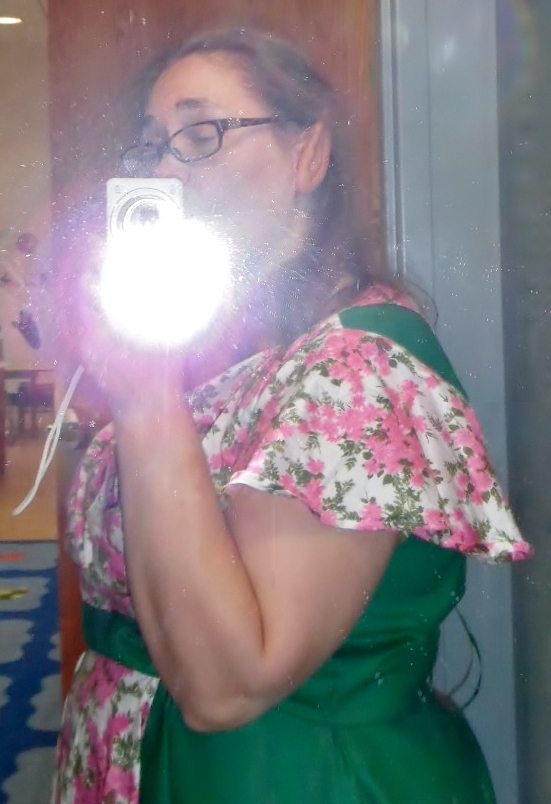 And as for the feet, well, that was our craft of the evening:

I’d seen hobbit feet ideas where people glued bits of yarn onto cardstock and tied those onto shoes, but glue and yarn is a messy, frustrating combination. I decided to go with a variation on yarn pom-poms. I sliced toilet paper tubes lengthwise and gave one half to each child, who wrapped the tube with yarn. Then—with grownup help—we tied more yarn around the whole bunch on the open side, then cut the yarn along the opposite side, making rows of fringe along each side of the tie-yarn which could now be tied to the tops of shoes. Voila! …well, in theory. In practice, if we wanted all the yarn hairs to hold together, we would have to tie the cross-string so tight it would turn the rows into pom-poms, instead of the nicely-spaced length we’d rolled along the tube. I put a strip of tape on the underside of each to secure them. And we even ended up, gasp, using a bit of glue.

But finally, you can never go wrong with games that involve throwing stuff. Any story that involves aiming at something can become a beanbag toss idea. Twenty years ago my brother had a Star Wars party with a Destroy the Death Star beanbag toss.  For this party, we had a Shoot-the-Remarkably-Beanbag-Shaped-Arrow-at-Smaug toss. 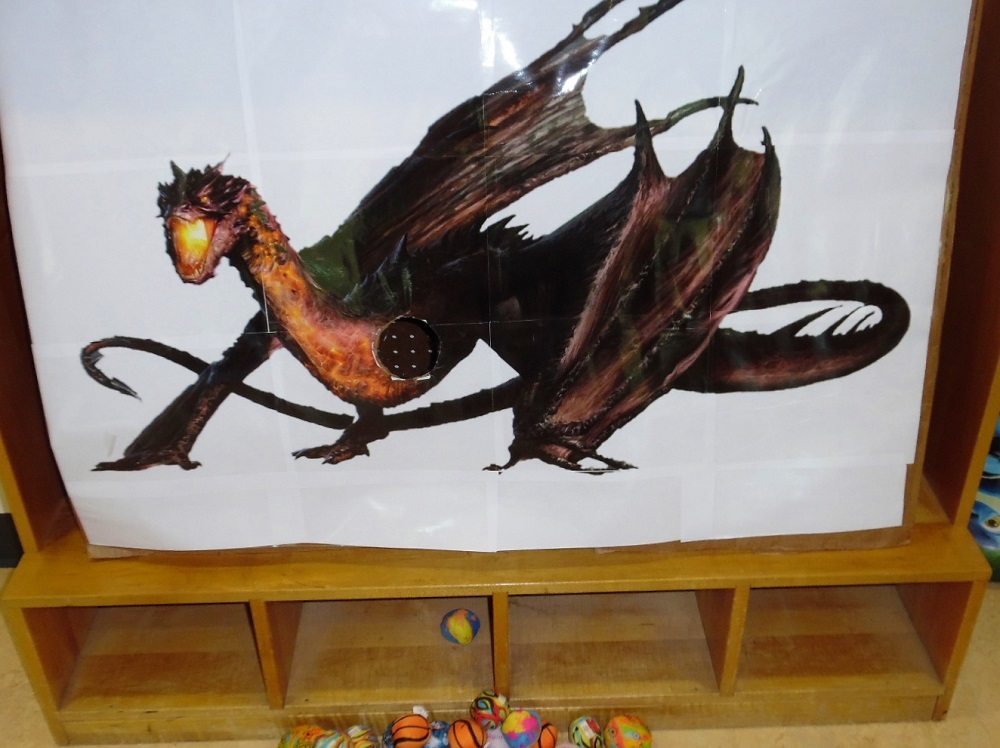 Did any of the kids know who Smaug was? No. Did any of them care? Hey, it’s a cool-looking dragon. And they got to throw stuff at it.

In the end, everyone had a good time, even if they weren’t always sure what I was talking about. I learned that my Family Night crowd really is too young to appreciate Tolkien. But do I regret this program?

Are you kidding? I got cupcakes and apple tart. It was a great night.

*Technically, his legal name is Samuel, but I call him Samwise far more often.  In completely unrelated fun facts, points to everyone who catches the other Geek reference in my son’s name! There are actually quite a few fictional Sams I can count, but I mean his FULL name, if you work it out. So far I’ve only ever met one person who made the connection.  It’s like a secret handshake! (Small hint: I capitalized “Geek” on purpose). 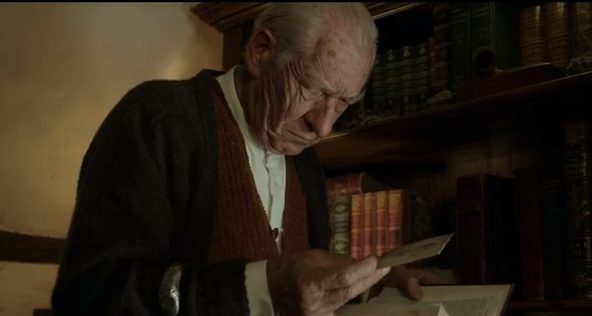 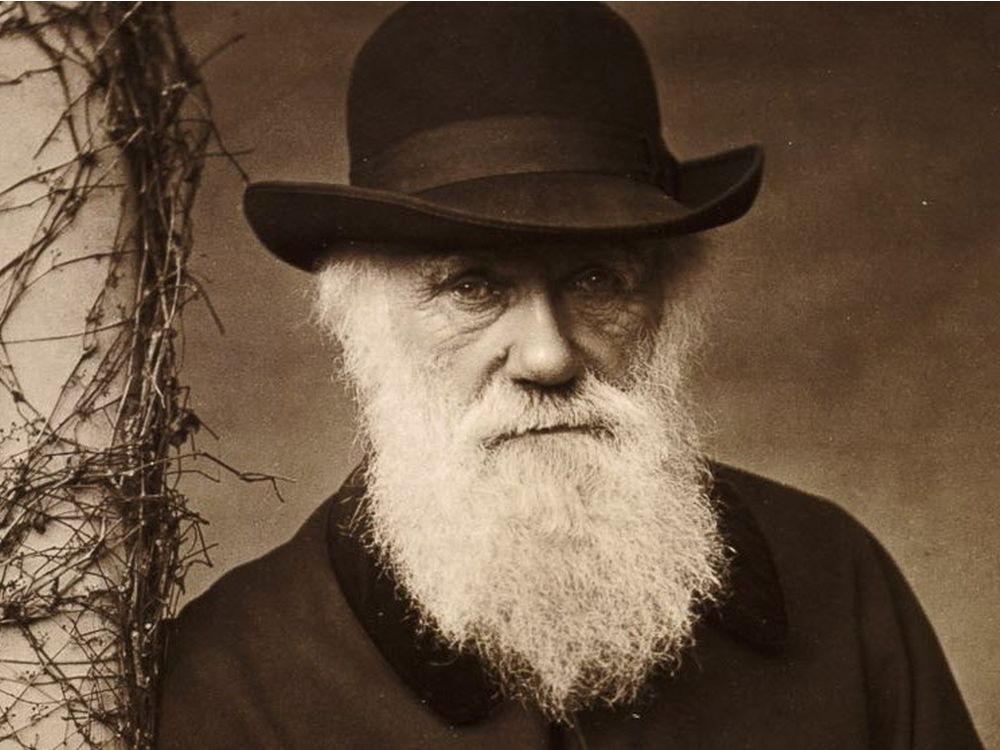