Teaching younger children how to code and programmable robots go hand in hand. Robots are in themselves fascinating for children (of any age), and the immediacy of seeing lines of code converted into action is invaluable for capturing wandering attention spans.

Enter Dash and Dot, from Wonder Workshop, the most engaging pair of robots you’re ever likely to meet.

From the moment you hold the box, you can tell you’re holding a product of quality, a product somebody has put a lot of thought into. Opening the box is a tactile experience. It has an attractive design—brushed cardboard with a magnetic catch, and inside the box, everything is laid out well.

The glossy hard plastic and blue/orange color scheme make the robots extremely appealing, and when you turn them on, they are just the right level of cute, without inducing nausea. Dash and Dot are immediately engaging and demand to be played with.

Dash is the larger robot, and can move about. Dot is smaller and immobile. Both have hours of programmable potential just waiting to be realized. Both Jonathan Liu and Dave Banks have looked at Dash and Dot for GeekDad. Both were equally impressed. This is a product that has been thought about in great depth.

The making or breaking of these types of products are the apps and community support. The excellent production values used in building the robots continues right through to the educational support provided for Dash and Dot. The Wonder Workshop website has lots of great ideas of projects to carry out with your robots, and the apps all function well, with intuitive interfaces. All the Dash and Dot apps are available from iTunes or the Android store. I’ve tried both platforms and they work equally well.

Dave’s earlier review covered the “Go” and Blockly apps, so I won’t say too much more about those. Except to say, Go is great for your first drive. With it, you can use your device as a remote control, to send Dash around the house, or to control both robots’ lights and sounds. The siren noise is particularly popular with our emergency-services-obsessed four year old.

The Blockly app is a coding tool very similar to Scratch, where you can use colored jigsaw shaped lines of code to build up routines for your robots to follow. The app for Dash and Dot has puzzles and challenges for your children to complete. As they do so, they are learning to create simple computer programs. Those who have learned some Scratch should take straight to it, and those yet to try it will find these tutorials an excellent path into a wider world of programming for children.

The Wonder app is clearly Wonder Workshop’s flagship app for Dash and Dot. It’s extremely well polished, and again, a lot of thought and love has been put into it. Jonathan has also covered the Wonder app, so do read what he has to say about it, too.

Wonder offers another way for your children to program their robots, using icons. Each of Dash and Dot’s operations (called cues in Wonder parlance) are represented by a picture icon, with a string hanging from it. Strings can be attached to other cues, and then followed in sequence. The strings can have timers added to them, so operations can be carried out instantly, straight afterwards, or after a delay. 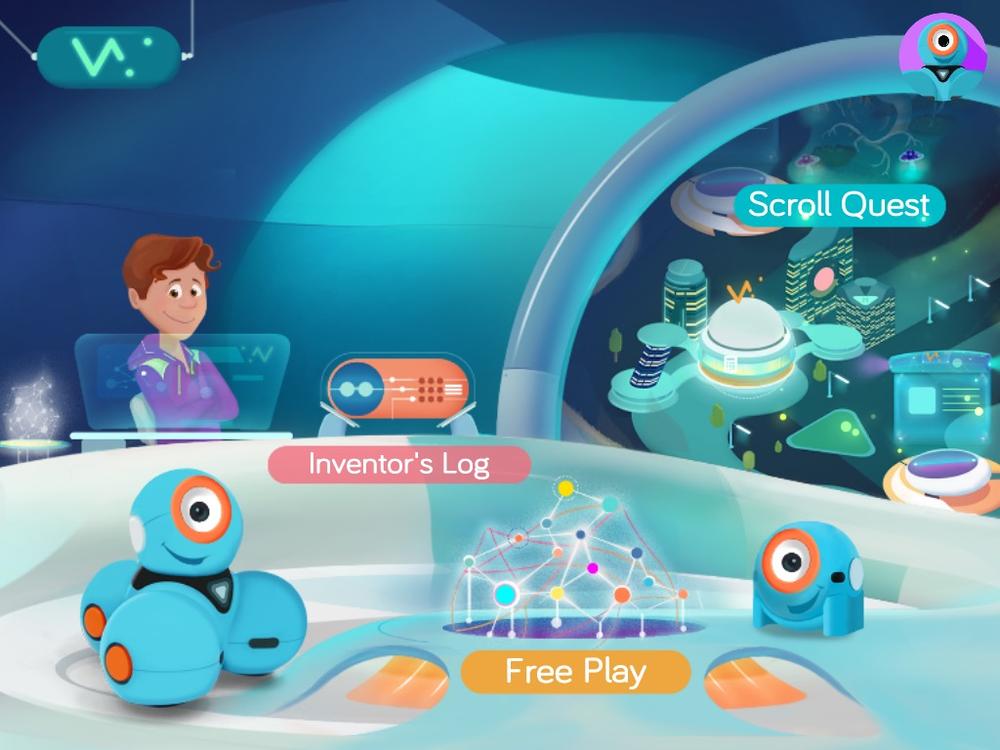 Inside the Wonder app, there are several options. First you’ll want to visit the “Scroll Quest” in order to learn how cues work, and how to use them to program Dash and Dot. Each robot has their own area of the Scroll Quest, and both are extensive. There are hours of fun to be had here, and each station of the quest builds up a different aspect of your robots’ potential.

Progress in the Scroll Quest arena opens up the “Free Play” area where your children can start to build programs of their own. As they learn new cues in the Scroll Quest they become available in the Free Play section too. This prevents Free Play from becoming too overwhelming. There are a lot of cues to learn!

Better still is the community aspect. Wonder Workshop has clearly worked hard on this. In Free Play, once you have built a project, you can save it for your own future use. It can even be saved directly onto the robot, so that you don’t have to have the app open to run your routine.

For each of your projects  you can create a key (a random collection of letters), which you can then send to friends who also have Dash and Dot.  They can then play with your programs too. If you’re sent a program key by somebody, you can download and run it, to see what they have created. You can then copy, modify, and send back the program to the person who originally sent it to you. Great if you have friends who own the robots too, or, if your children want to share their programs wider, they can be uploaded to the Wonder Workshop website.

Wonder Workshop also set challenges, for which they give out keys. You can download their start-up routines and complete the challenges set. I tried one called Zoo Party Challenge, and it was far from straightforward. It should keep your children entertained for hours. There are currently 10 challenges to work through.

All three of my boys have enjoyed Dash and Dot. My four year old enjoys the remote control and chasing it round the house. My seven year old has really found his way into the Wonder app. He hasn’t created any of his own programs yet, but is enjoying working his way through the Scroll Quests. He is also beginning to explore the uses of the Lego brackets—clever accessories that come in the box that clip on to Dash, allowing you to attach Lego structures. In his case, Star Wars spaceships.

After originally being slightly disdainful, my ten year old interrupted me writing this review, took off with Dash, and returned two hours later having learned lots of the Wonder cues and written several of his own routines. He’s now keen to play again, and even better, work on a project with Dash, Dot, and his brother.

I’m very impressed with Dash and Dot. Like all robotics toys, the investment required to bring them home is not insignificant, but they are a top-quality product. I’m lucky enough to have three children and so should have many years of use out of them yet. The support from Dash and Dot from Wonder Workshop is excellent. The team clearly care about their inventions, and about helping today’s children become the programmers of tomorrow.

Disclosure: I received a Dash and Dot box in order to write this review.  Dash and Dot are available to buy, here.