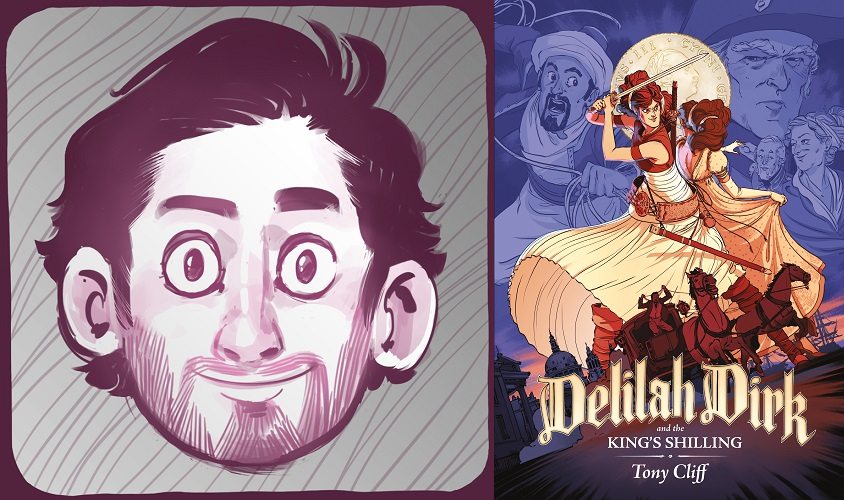 Often described as a female Indiana Jones or a “more fun” Lara Croft, Tony Cliff’s Delilah Dirk is really nothing short of some of the most fun “globe-trotting, torch-swinging, tomb-raiding, swash-buckling traditional adventures” you can have on the printed page. And even better?

So if you happen to be a fan of raiding tombs, swinging torches, and buckling swashes – and for some reason you haven’t read either of the Delilah Dirk graphic novels – you really should correct that oversight immediately. And there’s never been a better time. With a third book on the way and the film currently in production with Disney, you really should jump in and catch up.

The first book – Delilah Dirk and the Turkish Lieutenant – is where it all begins. Once you’ve whet your appetite, you won’t want to stop. Continue on to the second book, Delilah Dirk and the King’s Shilling. Then begin the difficult waiting game for the third book, which Cliff is working on now.

I recently chatted with Cliff about the series, what he hopes to see in the film adaptation, and where he’s going from here.

GeekDad: First of all, congratulations on the news that Disney picked up Delilah Dirk and will be making a live-action film. Can you say how long has this deal been in the works?

Tony Cliff: Not with any great degree of certainty. I can say it feels like the movements that have been made have happened very quickly. Mark Mower and Justin Giritlian and Roy Lee and Miri Yoon have been responsible for getting it where it is, and I’m excited to see how things develop.

GD: Based on the quality of most of the recent live-action remakes that Disney has been doing, I imagine you’re pretty happy that the story has found a good home. How involved will you be with development? Are you working on the screenplay?

TC: We’re off to a great start – I think everyone involved finds the same appeal that I do in the main characters, their relationships, and the setting. It’s still really early in the process, though, and currently my full time is being devoted to making the third Delilah Dirk book. 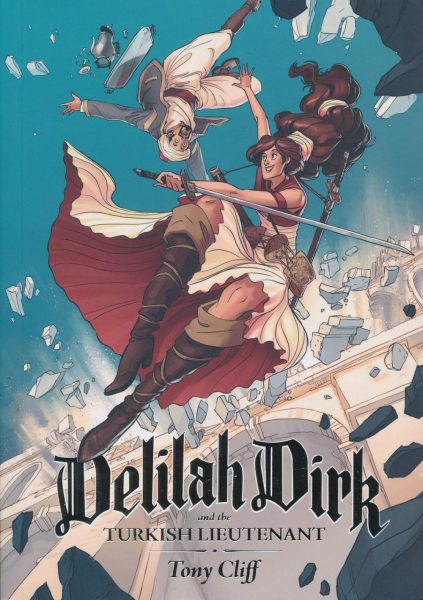 GD: Who’s on your personal shortlist to play Delilah?

TC: Ha ha ha, oh, I don’t know. I’m positive there’s someone great out there who would be perfectly suitable, but I don’t know who that is. I’ve always secretly hoped it would be someone with a relatively obscure profile who would disappear into the character, and people would see the film and say, “oh wow, who’s so-and-so; why haven’t I seen her around more?” If I think about it too hard, though, the whole process starts to feel weird.

GD: Who else would you love to see attached to the film?

TC: I’m not sure, but I do know I would love if someone were to bring some solid old-fashioned approaches to filmmaking. Indulgent establishing shots. Well-blocked, readable action that’s not cut too frenetically. I was listening to the SCRIPTNOTES podcast (episode 255) and Billy Ray was describing an approaching wave of audience fatigue toward things like world-ending stakes and CG visuals, and I mostly agree. Keep the stakes personal, maybe regional at most. As long as they matter to our heroes, won’t that keep the audience’s interest? And let’s see some real humans in real locations. There’s still a hard-to-place, intangible quality to doing things practically. Good compositing can look really convincing, but even with the best work it’s hard to truly match the look of a practical shot. And since this quality of practical visuals is so intangible, it’s a hard argument for a filmmaker to make to whoever controls the budget. Anyway, I’m off on a tangent now, my old-man Hollywood idealism is a topic for another discussion.

GD: Invariably, when a story makes the jump from page to screen, changes are made. What aspects of the story and character are absolutely essential for you? What must remain?

TC: As long as DD is still an impulsive, contrary, dedicated, energetic woman and Selim is still a cautious, thoughtful, fussy door-mouse of a man, and they’re still different genders and/or of different racial backgrounds, I think we’ll be good. Oh, and I hope DD keeps an English accent.

GD: The third book in the series is coming soon. Can you tease us with what’s coming?

TC: Ha ha, well, I can tell you that it is going to be a bona-fide globe-trotting, torch-swinging, tomb-raiding, swash-buckling traditional adventure. There’ll be treasure and ancient inscriptions and theft and cruel villains and it’ll all be a blast.

GD: How big is the overall story? Is there an end? If it were entirely up to you, how many books would we see?

TC: Considering how long it takes to make these things, I don’t know, I could probably turn out two, maybe two-and-a-half more before the cruel grasp of old age and death drags me beneath the ground. I’ve always thought I’d model my approach to series books like Bernard Cornwell seems to do with his Sharpe series – he just keeps slotting books into the chronology. I don’t know how much of an arc he had plotted out for his characters, but many of the books were written out of chronological order. Every time one comes out, it’s just a new episode in the characters’ lives. I have vague notions for DD, but I’d be lying if I tried to convince you if I had architected a complete, life-long elaborate plot. I’ll keep making them as long as there are interesting stories that present themselves and that can be slotted into the “bigger picture.”

GD: Today, it’s never been easier to put your words out there for people to read. It’s dead simple to put your writing online, and with self-publishing, it’s also pretty easy to get your stories out there in both physical and e-book forms. I’m curious to know what your thoughts are about that. Is that ease of putting your work out there a benefit or a hazard for a young writer?

TC: Oh, I’d be hard-pressed to consider it a hazard. I’m a firm believer that sharing work is a good thing. It worked for me at multiple stages, trying to turn DD into A Thing. It certainly doesn’t seem to be preventing traditional publishers from courting authors – if anything, sharing seems to be making the process easier? After all, how are people supposed to know about an author or the author’s work if it’s not available to read? How will authors meet other like-minded authors if they don’t put work out there? I have only recently learned that evidently (unless you get really lucky) achieving “success” in writing/making comics is a real long-haul marathon. Whatever gets you out of the starting pen and into the course is a good thing.