Dying to try some Romulan Ale? Or perhaps some (shudder) Synthale?

Well, you might need to wait a while longer for those, but Shmaltz Brewing is here to satisfy your craving for nerdy adult beverages with some appropriate Trek references. If you’re deep in the world of Trek beer, you may remember Shmaltz as the company behind Vulcan Ale: The Genesis Effect, which was the first of three special Star Trek-themed beers.

The second of those beers – Golden Anniversary Ale: The Trouble With Tribbles – is now available and will be getting some special placement at this week’s Comic-Con International: San Diego.

The beers are timed to celebrate Star Trek‘s 50th anniversary, and the Tribbles ale will be available at the premiere of Star Trek Beyond on July 20 and onsite at the San Diego Convention Center (July 21 – 24). In addition, it’ll be available (on tap and in bottles) at a slew of San Diego retail locations. Refer to this interactive map for locations.

In the original Star Trek series episode “The Trouble with Tribbles,” the USS Enterprise is called to protect a shipment of a genetically engineered four-lobe grain that is a hybrid of wheat and rye called quadrotriticale. Since the year 2269 is still about 250 years in the future, quadrotriticale has yet to be conceived. Thus, Shmaltz brews with triticale for Golden Anniversary Ale: The Trouble With Tribbles.

Drew Schmidt, Shmaltz’s lead brewer, comments about the beer, “Light Carastan malt gives some residual sweetness in the form of very light toffee. A dose of Munich adds a slight bready quality, and wheat malt lends to a slight crisp character. Mashing at a moderate temperature gives this beer a medium body. In keeping with the intergalactic theme, hopping is comprised of Comet, Polaris, Aurora, and Admiral (Kirk) hops. This beer is only loosely filtered to clarity, in order to preserve the ambiguity of good and evil.” 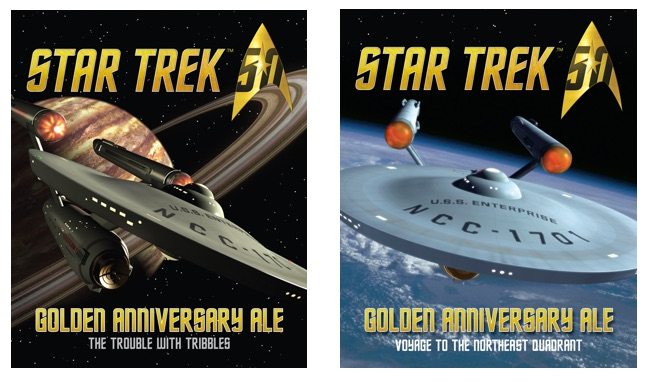 1 thought on “Boldly Go Where No Ale Has Gone Before”