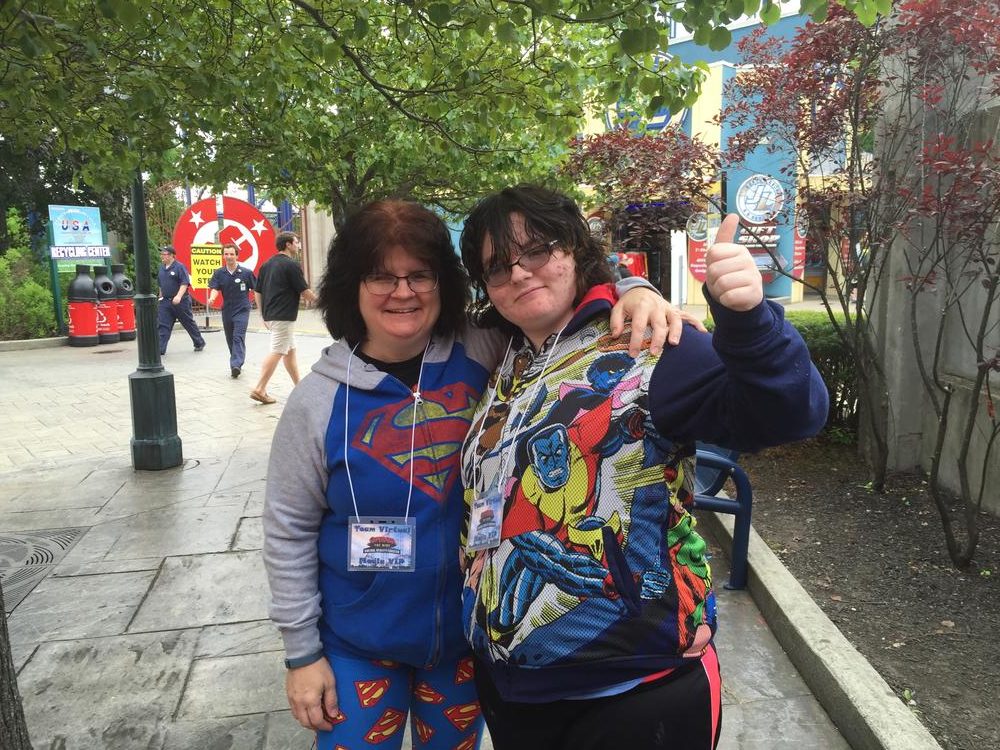 Six Flags New England is advertising its new virtual reality addition to the roller coaster Superman: The Ride as the “tallest, fastest, and longest” virtual reality coaster ever.

All those adjectives are  true. And yet, the biggest question in my mind was not whether it would be cool–it is–it’s whether the virtual reality would improve the experience of riding what’s become my favorite roller coaster of all time or not.

To answer the question, I needed help. Three of us headed out to Six Flags’ special press day to preview the virtual reality last week–myself, my eldest son, 20, and my youngest daughter, just 17. Press day fell on her birthday and it’s a measure of her love for coasters that she was thrilled to be spending the day at Six Flags.

We each had a different answer to whether virtual reality enhanced the experience or not.

First, I should describe Superman: The Ride and the VR addition.

Six Flags partnered with Samsung Gear VR and Oculus for the “world-class” virtual reality. The Samsung Gear VR headsets provide the imagery, complete with an extra-wide point of view to seamlessly merge reality with the virtual world. Yes, seamless. Yes, seamless even when the VR simulation becomes stuck in place. I’ll explain that part in a moment.

The ride itself, built in 2000, features a 208-foot lift hill, a 221-foot drop, and over 1-mile (1.6 km) of track. It reaches speeds up to 77 mph and lasts for 2:35 minutes, a twirling, twisting experience that takes place by the banks of the Connecticut River. It’s a five-time winner of Amusement Today‘s Golden Ticket for steel coasters.

In other words, it was already an awesome ride before the VR.

The virtual reality simulation begins the moment the goggles are pulled down over a rider’s eyes as they are strapped in their seats. The virtual setting takes over and riders are transported from a roller coaster to a Metropolis light rail station. It’s a terrific illusion, especially since it extends past the feet and to the pretend street below. As the train climbs that first hill, Luthor wrecks the “light rail” cars and the ride falls (the first big drop). Superman snags the train to prevent a crash, and the two battle it out as Superman tries to keep hold of the train and save everyone’s lives. (He does, of course.)

My daughter was thrilled at the uniqueness of the experience, especially since she’s ridden this coaster numerous times and now it felt like something completely different. The virtual reality was an unqualified “thumbs up” from her.

My son concluded the experience was “about the same amount of fun” as riding with eyes open. He  claimed the animation of the virtual reality was about “’90s video game level.” “The action is great, but Superman’s face never changes expression.” Kids these days. So jaded about computer and computer simulations.

For me? Well, my ride showcased the downside of the logistics of adding virtual reality to a ride. My VR simulation never moved beyond being at the station as it didn’t sync up with the command to start the ride.

The only way I knew I was moving at first was the wind whipping across me as the coaster moved to the top of that first hill, up 208 feet. Of course, I felt the various dips, turns, and spins, but it’s absolutely freaky to be feeling these things with your body and yet your vision informs you that you are stationary.

No, that’s not as fun as the VR simulation or riding the ride with the naked eye. But as far as novel experiences go, it ranks fairly high on my list. It showed me just how much my perception of the world is informed through my vision and how a different “reality” seen through the eyes could  affect all my senses.

So, in short, there’s no experience like this one and it must be tried at least once, though I hoped they work out the kinks with the googles syncing with the start of the ride for regular park-goers. Several riders had the same problem as I did on our turn.

A few notes for those intending to try out the coaster and visit Six Flags:

Six Flags New England is open all summer daily until September 6th and open on weekends until Halloween.

The Game Loft Needs Your Help

1 thought on “Does Virtual Reality + the Roller Coaster = Awesome?”