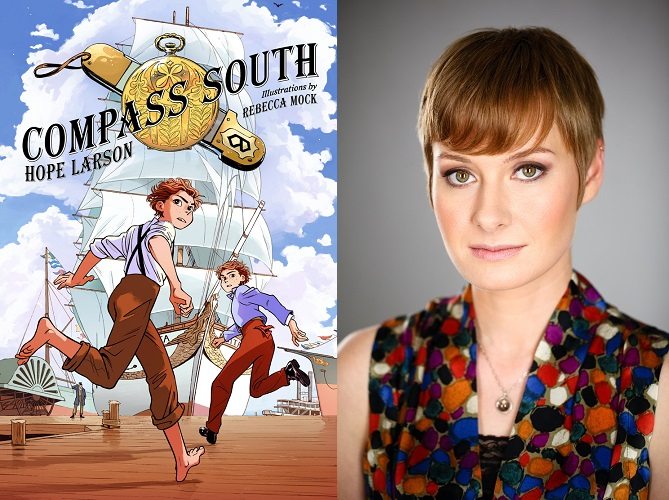 I’ve been looking forward to this one for a long time. Out this week is Compass South (the first of a planned series) from Hope Larson and Rebecca Mock. The book is a graphic novel about 12-year-old twins Alexander and Cleopatra Dodge, and if those aren’t names immediately evocative of an old-fashioned 1930s high adventure, I don’t know what is.

The story takes place in 1860, and Alex and Cleo have spent much of their lives on their own. Orphaned by their mother while still babies, they joined the Black Hook Gang after their father mysteriously disappeared. The story begins with a botched robbery that finds the twins in police custody. The ultimately sell out the Black Hook Gang for their freedom and are forced to assume new identities and go on the run.

And thus begins an amazingly fun adventure that recalls some of the best serialized stories from the early days of radio and pulp fiction. Compass South is filled with fascinating characters and settings. In addition to the twins, we get Luther, leader of the Black Hook Gang; Captain Felix Worley, scourge of the Pacific; and Sar, the Costa Rican girl who comes along with Cleo needs her most.

I had a chance to chat with author Hope Larson – whose previous books include Chiggers, Mercury, Salamander Dream, and A Wrinkle in Time – about her new book.

GeekDad: Compass South is an old-fashioned, swashbuckling piratey adventure that recalls the serialized films and radio dramas from the 30s and 40s. This is awesome, but it’s also a bit of a departure from most of your other work. How did this particular story come about?

Hope Larson: I’m so glad you enjoyed the book! I don’t see it as a departure, though. I started dabbling in historical fiction with Mercury, half of which is set in 1860s Nova Scotia, and since then I’ve written a number of other historical projects. Some of those never made it to print, because it’s much harder to interest publishers and readers in historical fiction, but both my short film Bitter Orange and the short story I contributed to Gotham Academy Yearbook (drawn by Kris Mukai) are set in the past. Even my adaptation of A Wrinkle in Time is set when the book came out, in the early 1960s.

GD: How does working on an original project like Compass South compare to working on an adaptation (like A Wrinkle in Time) or an established character (Batgirl)?

HL: I prefer to write my own stories from the ground up, but adaptations and work about existing characters is much more lucrative. I enjoy all of it, though, and every project is an opportunity to try some new techniques that I can later apply to my personal work.

GD: What is it about the long-form graphic novel that makes the format so compelling for you as a creator?

HL: It’s the format I am most familiar with and most comfortable with. A big advantage is that I can hone the book as a whole, instead of working in bits and pieces, as one must with serialized comics. A big disadvantage is that it can take three years or longer for a graphic novel to hit stores.

GD: Rebecca Mock does an incredible job of bringing Alex and Cleo’s story to life. Do you ever get anxious at the beginning of a new project that you’re not also illustrating?

HL: No. Every artist brings something unique to the process, and I appreciate the differences among them. There haven’t been many times when I was disappointed in a collaborator.

GD: I know there’s a sequel to Compass South already in the works. What can you tell us about it?

HL: The sequel is pretty much done; we’re just handling copyedits and corrections. It’s the continuing adventures of Alex and Cleo! Really don’t want to say more than that since most people haven’t even read the first book yet.

GD: How big is the story you’re envisioning? If it were entirely up to you, how many books would we see in the series?

HL: I would love to write more books, but I don’t have a set number in mind. That’s a quick route to disappointment.

GD: In your opinion, is the ease of putting your art out there for people to see on the Internet a benefit or a hazard for a young artist?

HL: This is an odd question. My personal experiences in this regard took place back in the early 2000s, and the world is completely different now. I haven’t been a young artist myself in a long time. Putting your work on the Internet is easy, but getting people to actually look at it isn’t. I don’t know what else a young artist could do to familiarize people with their work EXCEPT put it on the internet. It’s not a benefit or a hazard; it’s just the way the world is.
Liked it? Take a second to support GeekDad and GeekMom on Patreon!