Squirmish is a game about a bunch of crazy creatures with wacky abilties in a free-for-all battle.

At a glance: Squirmish is for 2 to 4 players, ages 7 and up, and takes about 30 minutes to play. It is currently seeking funding on Kickstarter, with a pledge of $20 for a copy of the game. 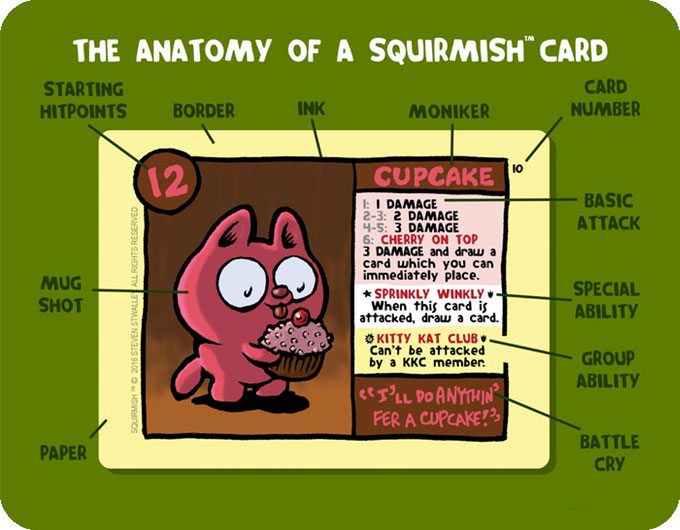 The cards are a lot of fun, with some really cute creatures and some really bizarre ones. Each one has hit points, basic attacks, special abilities, and a battle cry. Some are also members of a group and have a group ability. I really love the cartoony artwork on the cards, and the battle cries are entertaining.

The one thing I recommended was adding some sort of indicator so that it’s easy to spot whose card is whose: it’s determined by the orientation of the card on the table, but because some of the illustrations are on the left and some are on the right, it’s not always immediately obvious when you’re scanning a table full of cards.

I can’t speak to the final component quality because mine is just a prototype, but the artwork and design is nice.

The object of the game is to knock out 3 of your opponents’ creatures.

To set up, shuffle the deck and give each player 5 cards.

Drawing a card is optional, but if you end up with more than 5 cards, you must discard one.

To place a card, you just add it to the grid of cards on the table, orienting it so that it’s facing you. You may have up to 5 cards on the table. You’re also allowed to replace one of your cards with a new one, but only if it has full health—the replaced card is discarded. New cards must be placed adjacent to at least one card—they can’t be off floating by themselves. When you place a card, if you say the Battle Cry then you’ll get +1 Attack if you attack with that card this turn.

To move, simply swap one of your cards with a card next to it.

To attack, announce which card you are attacking with, and which card you are attacking. Roll the die. The number rolled determines the effect (according to your creature’s card). Don’t forget special abilities! Group abilities kick in if there are at least two creatures from the group on the table. Mark damage with counters—if there’s enough damage to equal the hit points on a card, it is knocked out and you take the card as a trophy. (Note that you are allowed to attack your own creatures, but if you KO one, you discard it instead of getting the trophy.)

That’s basically it. The game continues until any player has amassed 3 trophies.

Squirmish delivers pretty much what it promises: a quick, funny, easy-to-learn game with lots of goofy critters and a mix of luck and strategy. It’s not super deep, but it doesn’t aim to be.

The wide variety of monsters is probably my favorite thing about the game. You can have a lot of fun just looking at the cards and reading their names, attacks, and special abilities. Some of the basic attacks are similar to others, but there are a whole bunch of unique abilities, too. For each character, the higher you roll, the better the attack, with a named attack as the highest roll (on a 6, or sometimes on a 5 or 6).

As an example, Little Warhead (in the picture above) does no damage at all on a 1–5, but on a 6 you get “Put Up Your Nukes,” which does 6 damage to all cards in play. The player using Little Warhead tried attacking several times with no effect, and then switched to some other characters for a while. But then he tried Little Warhead again, rolled a 6, and managed to KO 3 characters in one turn for the win.

It’s hard to say whether all of the characters are well-balanced in the few plays I’ve had—some of them can seem overpowered, but on the other hand, chances are pretty good that you’ll also have a character that’s really powerful. Some of the characters that have fewer hit points also have abilities that avoid damage so they’re harder to KO.

The group abilities are interesting, but don’t come into play that often, particularly once you’re using the 108-card deck. Getting more than one just depends on luck of the draw. I do recommend drawing a card every turn even if you have 5 already, just because you may be able to get another match for a group that way, but it doesn’t always pay off.

Keeping track of all of your abilities can be tricky, even though you’re limited to 5 characters in play at a time, because there are some that activate on your turn and some that activate during other players’ turns. For instance, there’s a character that lets you roll each time somebody places a card: on a 6, that card is discarded. It’s always fun to find fun combinations of characters that work well together.

One thing that does slow the game down, in my opinion, is putting the “draw card” at the beginning of the turn. Since there’s a lot of text on the cards, each time you draw a new card, you’ll need a little time to read it and figure out its abilities. Drawing at the beginning of your turn means that everyone is waiting until you’ve read your card and decided if you want to place it, or one that you already had in your hand. Moving the draw to the end of the turn would shift that so you’re reading a card during the next player’s turn, which wouldn’t hold things up.

Still, that’s a fairly minor complaint (and easily house-ruled) because the game plays fairly quickly even as written. Overall, I’ve had fun with Squirmish both with my kids and with adult players. I think it’s a lot of fun for families. The dice-based abilities mean that there’s still a good amount of chance involved, which gives less-experienced players a chance to take on more-experienced players, so gamers who want something with pure strategy may not like it quite as much. And don’t forget to shout your battle cries as you enter the fray!

For more information, check out the Squirmish Kickstarter page.

Disclosure: I was provided with an advance prototype for review.