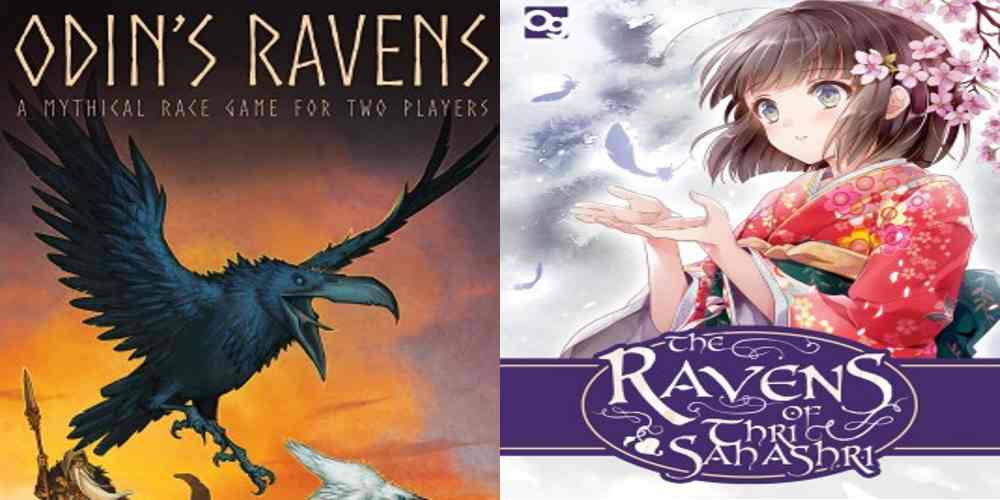 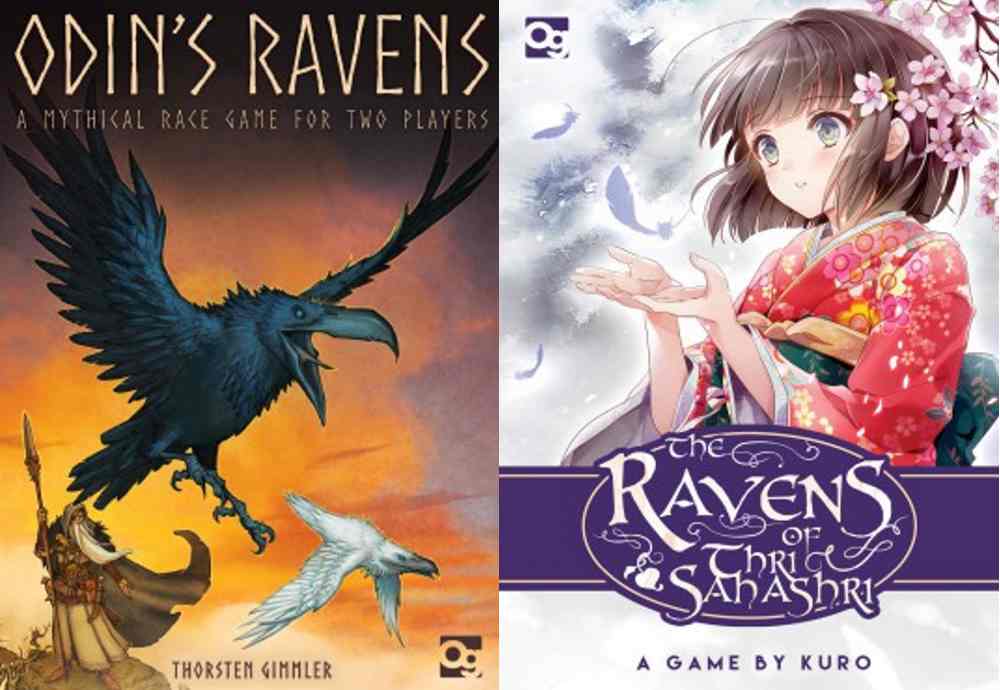 Until recently if you said the words “Osprey Books”to me (unlikely as that may be), I would have immediately responded with, “Militaria”. Growing up in a house with a Napoleonic War fanatic for a dad, I am no stranger to Osprey’s books, filled with maps, tactics, and uniforms. Their range is staggering, travelling from Bronze Age warfare to Vietnam and beyond, taking in battles like Agincourt and Galliopli along the way.

Now Osprey are bringing their expertise to smaller conflicts. Arise Osprey Games. I’ve been trying out a couple of their new titles. Both games are for two players, and both are made with excellent production values.

Odin’s Ravens is a reworking of the 2002 title of the same name, designed by Thorsten Gimmler. It’s a simple game, quick to learn and play. The beautiful illustrations and short playing time will bring you back to the table time and again. I’ve played this with both my 10 year old and my 7 year old, though the younger one needed a little help from big bro.

The premise of the game is simple. Odin, he of Nordic god and day of the week naming fame, has sent out his ravens across the world to bring back news. The ravens, Huginn and Muninn, speed in opposite directions around the globe, aiming to be the first to circumnavigate and return to their master.

How is this played out?

A track of 16 cards is laid out. Each card has two pictures, separated by a bar in the middle. The pictures of are varying landscapes, so the cards look like a deck of pastoral dominoes. Laying out the cards gives two tracks of 16 squares, one above the line, the other below.

The ravens start at the same end of the track, but on opposite sides of the card, above and below the line. During the game they move along their track until they reach the final domino. This marks the farthest extent of their journey. They then return to Odin down the opposite track to the one they have just traveled along. The first Raven back to the first card is the winner. In total each bird will have traveled across 32 squares.

Movement is carried out using Flight cards, of which each player has a deck of 25. They also have 8 Loki cards. These are used to try to get the better of your opponent. Each player starts with 5 cards and these can be made up of any number of Loki or Flight cards. The flight cards recycle, but the Loki cards do not. Each Loki card can only be used once.

The neat part of the game are the Loki cards. Both players get the same Loki cards and each one can only be used once (though the Loki cards are comprised of four sets of two), With Loki cards, you can manipulate the track, either by swapping cards over, turning them around, and even pushing them out altogether.

You can use your Loki cards to create swathes of the same landscape that your Raven can soar over. Alternatively you can frustrate your opponent’s attempts to do the same. There’s an additional complication – because your outward journey is the same as your opponent’s inward journey, attempts to smooth your path, may also help your opponent. Equally, plans to add turbulence to your adversary’s flight plan, might leave you feeling just as sick.

Odin’s Ravens is a neat simple game for two players which is quick to play and aesthetically pleasing. It won’t set your world on fire, but it will keep you entertained without things ever getting too serious.

The Ravens of Thri Sahashri is something of a unique beast. I’ve never encountered a game like it. It’s a two player cooperative card game, designed by Kuro (a Japenese designer and part of the awesome sounding collective, Manifest Destiny). The cards bear a heavy Manga influence. It even has a legacy component, so is very “on-trend”

This is not a simple game to play or explain. The premise of the game is that Ren is suffering from a broken heart. This can only be mended if she can relive her memories in a dream. Feth is helping her relive those memories. Since Ren is asleep, they can’t communicate, but must somehow piece together dream fragments to allow Ren to regain her memories. The antagonists in this affair are the ravens, who, fed up with not being allowed to take part in Odin’s race, are protesting by stealing the dreams of random Japanese teenagers.

The Ravens of Thri Sahashri is meant to be played without communication between the two players. As gaming is a fun, shared experience, I haven’t yet played without discussing tactical approaches, whilst always skirting around details about the game’s hidden cards.

In game mechanic terms, the player playing Feth has to find out the color of Ren’s four hidden cards. Whilst Feth is doing this, conceptually, the pair are revealing lines of a poem. In reality you have to work together to make Ren’s cards cards add up to 7. (This is done three times, on the final line Ren needs to make 5). There are five color suits, each with cards ranging from 1-5.

Feth gives Ren cards to choose from by placing them in a central well, called the “atman“. These are drawn from Feth’s memory deck. The cards have pictures on them that are divided into quarters. One or more quarter is shaded. The atman is built up by overlapping shaded areas. Each turn Feth can place as many cards in the atman as he likes. Ren can then take one of the cards and use it to make her poem (i.e. help her make 7).

Feth does not have to put all the cards he’s drawn into the atman, some can be discarded. Ren may also choose to discard a single card from the atman on her turn. The cards Ren picks or discards from the atman can give clues about which cards she does or doesn’t need to complete her poem. Feth’s deck also contains five Ravens, one for each color suit.  Once the Ravens appear, things start to get tricky. The Ravens eat discarded cards of the same color. This removes the cards from the game.

There are a number of ways eliminating the ravens, and trying to stay their appetites is where the game’s tactics come in. If all Five color ravens appear, the game is over. If Feth reaches the end of the deck, the game is over. The full game consists of three rounds, and any lost cards remain lost, so as the game progresses it becomes harder and harder.

That’s a general overview. There are many nuances and rules quirks, too many to list here. I have to be honest and say the rules confused me. In the end, we just had to start playing and worked things out as we went along. It has taken several plays to finally get all of the rules right (assuming we have, there’s no easy way to tell!).

I’ve yet to complete the game. If you are successful in your first few games, you’ve probably played it wrong. The game comes with three sealed envelopes. You can only open these when you have successfully managed to complete three rounds of the game. Since such a one-hit mechanism exists, it’s safe to assume that winning is tough. The two times we thought we completed the game, we went back over the rules, and found we’d made a mistake.

I really don’t consider this an issue. It’s been a gradual learning process, each time ramping up the difficulty a little. After the initial shock of the game’s complexity. I’ve found the sessions to be rewarding, with both sides finding the game absorbing. A full game, once you know what you’re doing, takes about an hour.

Playing The Ravens of Thri Sahashri is an entertaining experience, quite unlike anything I’ve encountered before. Because you’re working together it gives different playing experience to most two-handers. Once again the production is great. The pictures on the cards are evocative, as is the flavor text. The cards are roughly half as big again as standard playing cards; you do need a table with a reasonable amount of room, especially as the atman can travel in unexpected directions. The whole thing comes packaged in a neat slip-case, and the mysterious sealed envelopes are a nice touch. It’s like a mini legacy game.

On the strength of these two games, Osprey Game’s entry into the market is impressive. They’ve delivered two easily accessible titles with enough strategy to keep them interesting, and in the case of  The Ravens of Thri Sahashri, bring something new to a crowded tabletop.

Disclosure: I received copies of both games in order to write this review. Odin’s Ravens is available now. The Ravens of Thri Sahastri is available on May 24th

Pajaggle: An Amazingly Addictive Puzzle Game Anyone Can Play