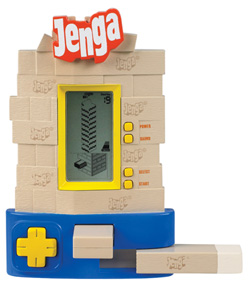 Jenga, originally developed in the 70s by Leslie Scott, didn’t make it ways to US shores until Milton Bradley secured the rights to sell the game in the late 80s.  There have been many variants of the physical game, including one for the NY Yankees, Donkey Kong, and even the adult themed Truth or Dare.

I’ve been a little interested in Atari’s version for the DS and Wii, but haven’t found a used one at the local Gamestop yet.  I was surprised to see that Zizzle is releasing a handheld electronic version of the game with actual moving sensors.  The geeklets and I have each put a couple hours into the game now and I have to say that it is more fun than I expected.

This electronic version has three different games, solo, player vs computer, and player versus player.  The later is designed for 2 to 4 players, but it wouldn’t be hard to adapt the rules to accommodate larger teams.  We also found that for 3 players it was just as easy to select a solo game and pass the device around the circle with the last successful turn winning.

Game play is deceptively easy at first.  You use the d-pad to select your block, then gently and slowly move the appropriate sensor to push or pull the block out.  There are two indicators on the LCD that you need to watch as you are taking your turn.  The tension sensor gives you an idea of how easy the block is to move, and the balance sensor shows when you are at risk of knocking the tower over.  Like in the real game you can test a block, and if it’s too hard to move try another.

I looked around online, and haven’t yet found a retailer for the game.  Electronic Jenga is available at Walmart, and coming soon to Target and other retailers at $19.99.

WIRED: Much of the same fun of the original game with a little less dexterity required, at least at first.  We didn’t have to restack the blocks after every game, and we haven’t lost any blocks.

TIRED: The sound is annoying, but can be muted.  The sensors don’t always return to center and occasionally have to be nudged into place before the next turn starts.