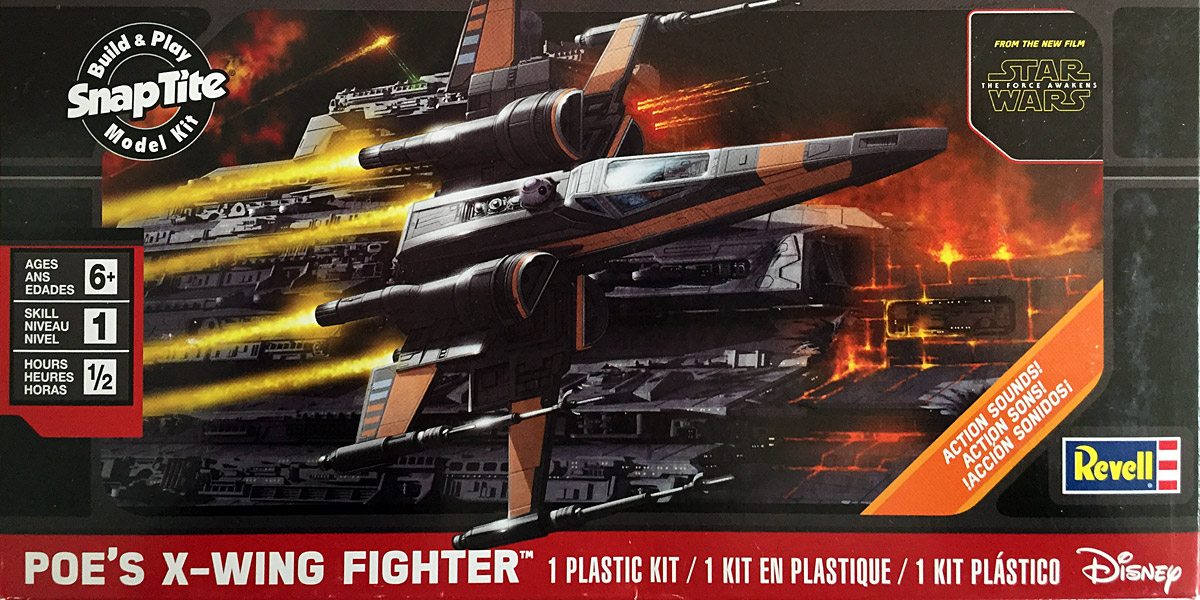 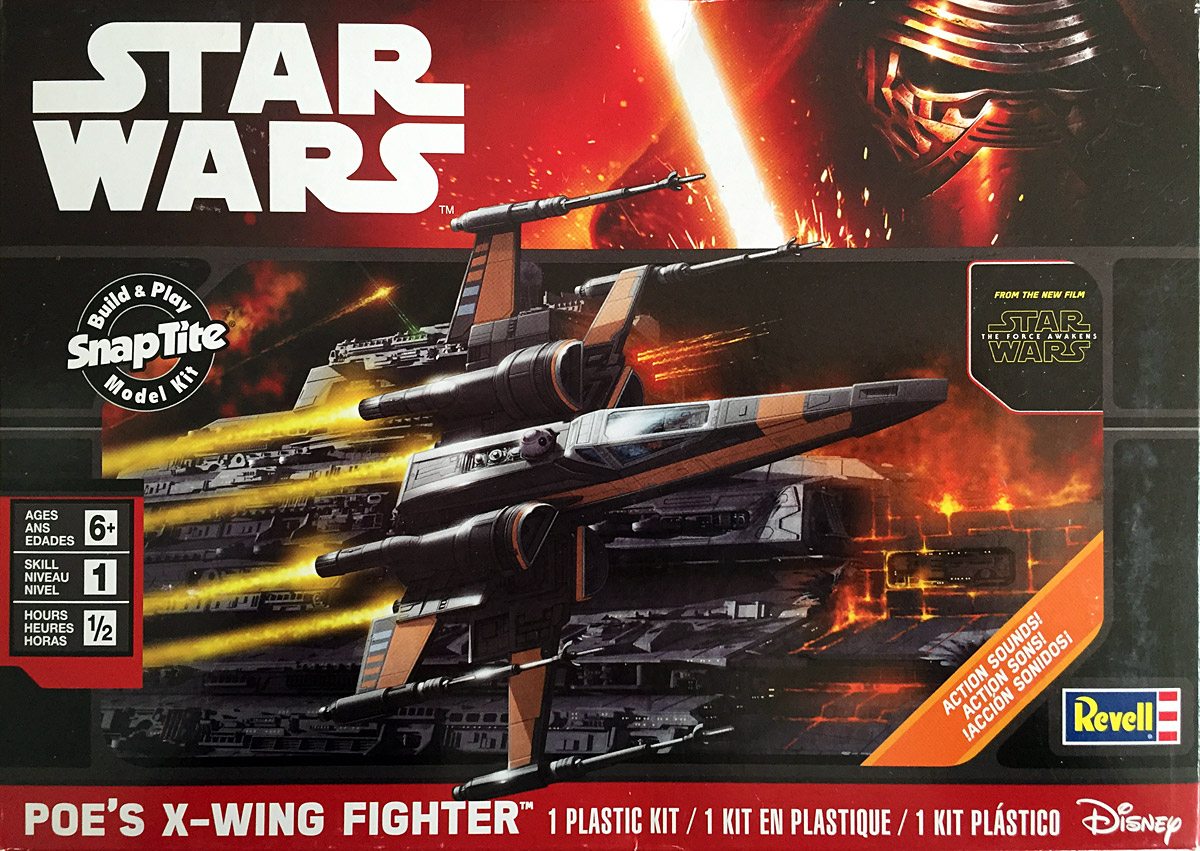 Revell continues its line of great, easy model kits with an entire line-up from Star Wars: The Force Awakens. 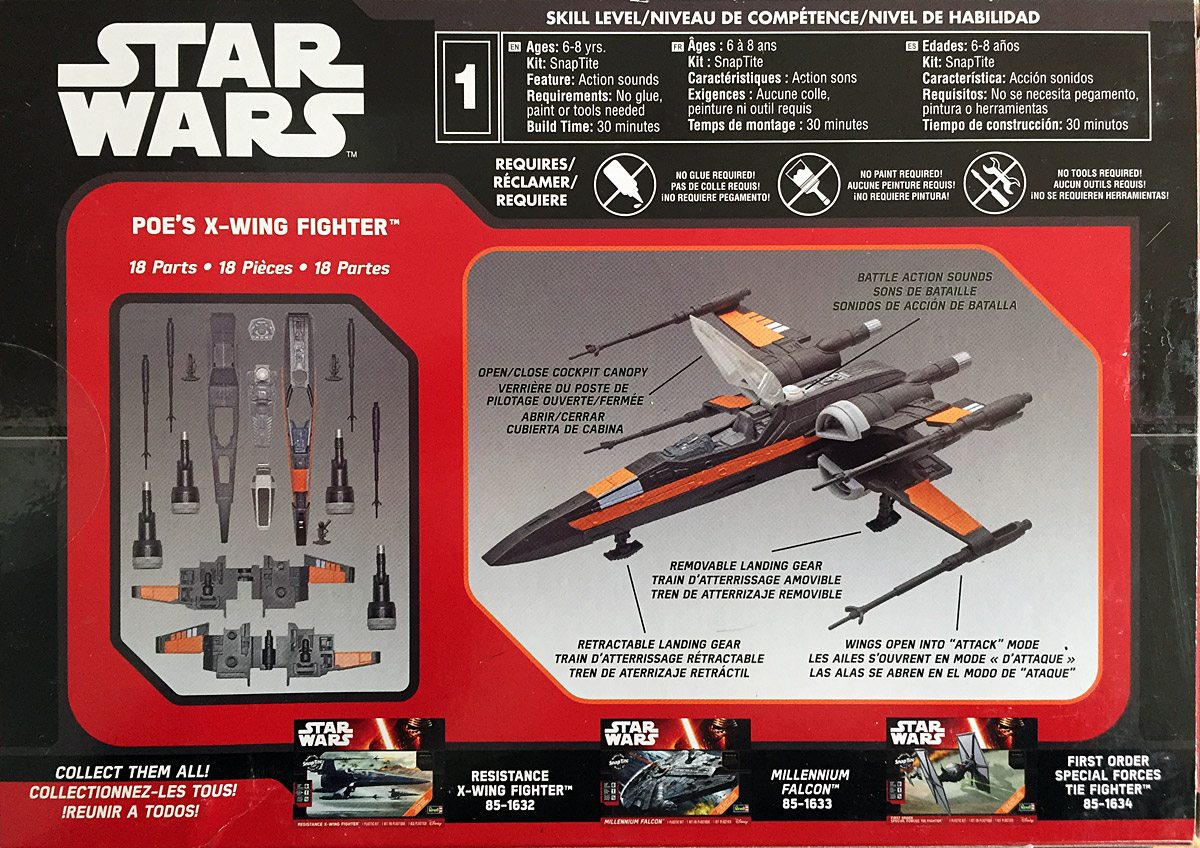 As I’ve written about previously, scale model building was a huge part of my world growing up, and I’ve been having a blast introducing this hobby to my son. However, his interest in playing with my old model kits hasn’t been steller, so for his birthday, we got him something we knew he’d be excited about–the Revell Star Wars Poe’s X-Wing Fighter.

The Revell Level 1 kits require no tools or glue or paint, are completely snap-together, and, for this particular kit, have a 6+ age range with an approximate build time of 30 minutes. Since my three-year-old and I have done much more difficult Gundam models together, I figured this would be easier than what he was used to. 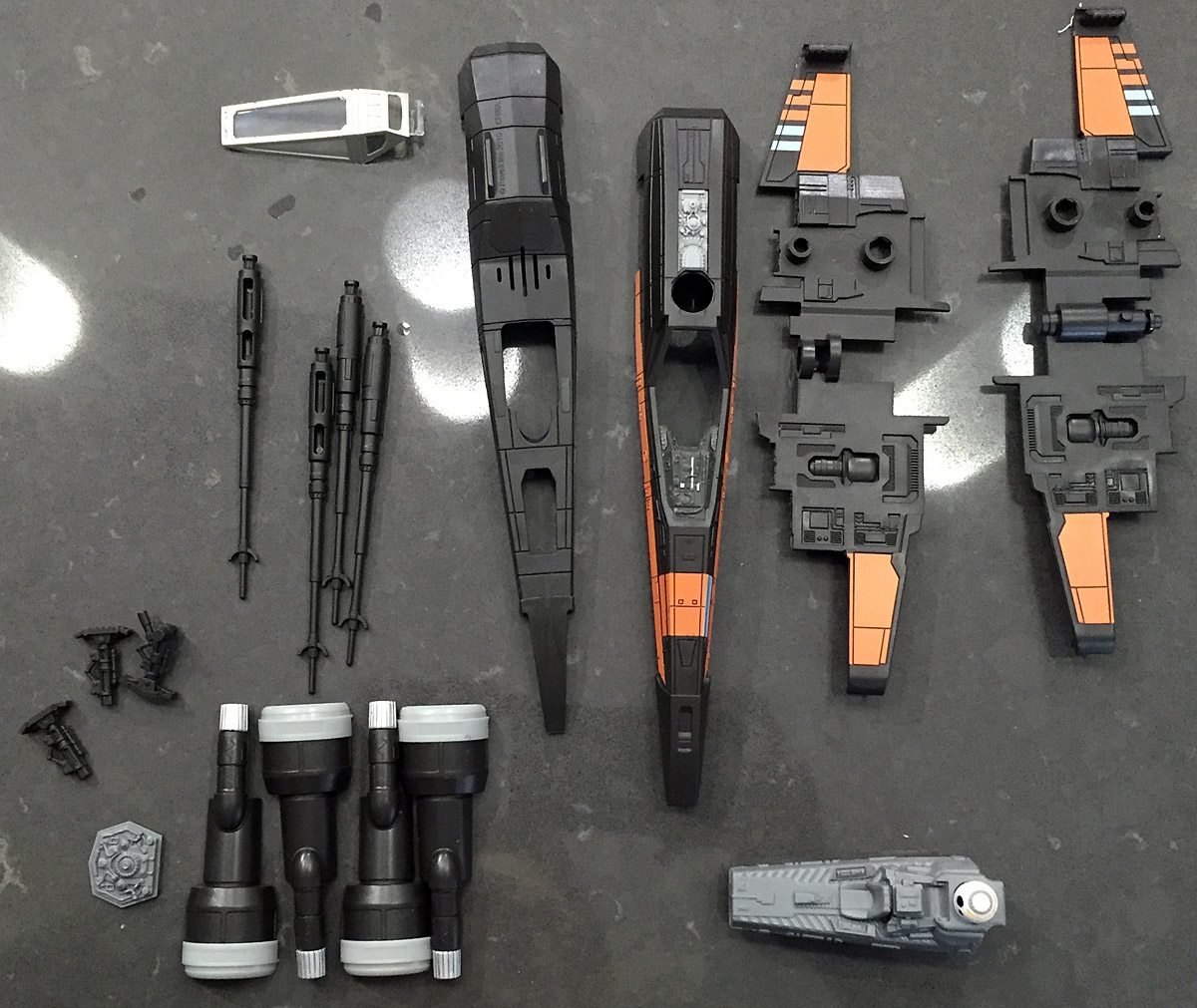 The kit has 17 pieces that easily pop out of the plastic container. No sprues! It even includes a little electronic engine piece with a BB-8 that is actually a button that, when pressed, makes one of three sounds that include engines, laser blasts, and explosions. I was a little disappointed that there were no BB-8 sounds.

Being a longtime model builder, I did want to pause a moment to point out the level of detail on this kit. This is a $20, Level 1 model kit, yet it has all the detail and fine paint job I would have expected on a much more expensive and higher level model kit. Unless you wanted to do some weathering on it, this kit has perfect detailing, which makes it great for any Star Wars loving kid (or adult). 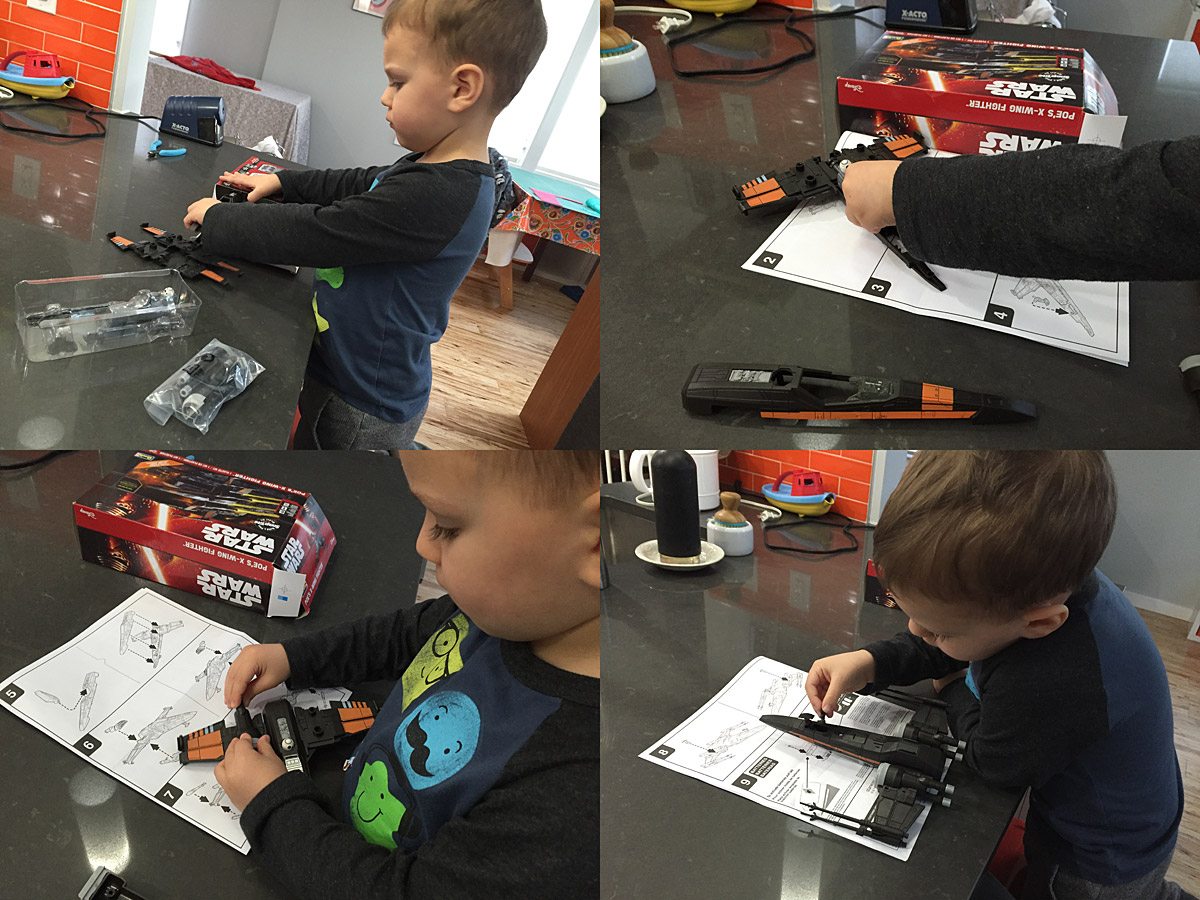 So how did the build go? Much better than I could have hoped for! My son did almost all of the assembly himself with very little help from me! I had him lay the pieces on top of the instructions to help with figuring out which pieces went together in which orientation. The only help I really gave was in the final pushes as he just doesn’t have the hand strength, and attaching the laser cannons as they were the most finicky part.

The finished model kit looks just as good, if not better, than a full price, off-the-shelf X-wing toy complete with opening cockpit, opening wings, and landing gear. The fact that there was no Poe did cause a bit of a fuss, though. I may have to try to 3D print a small Poe to stick in there! 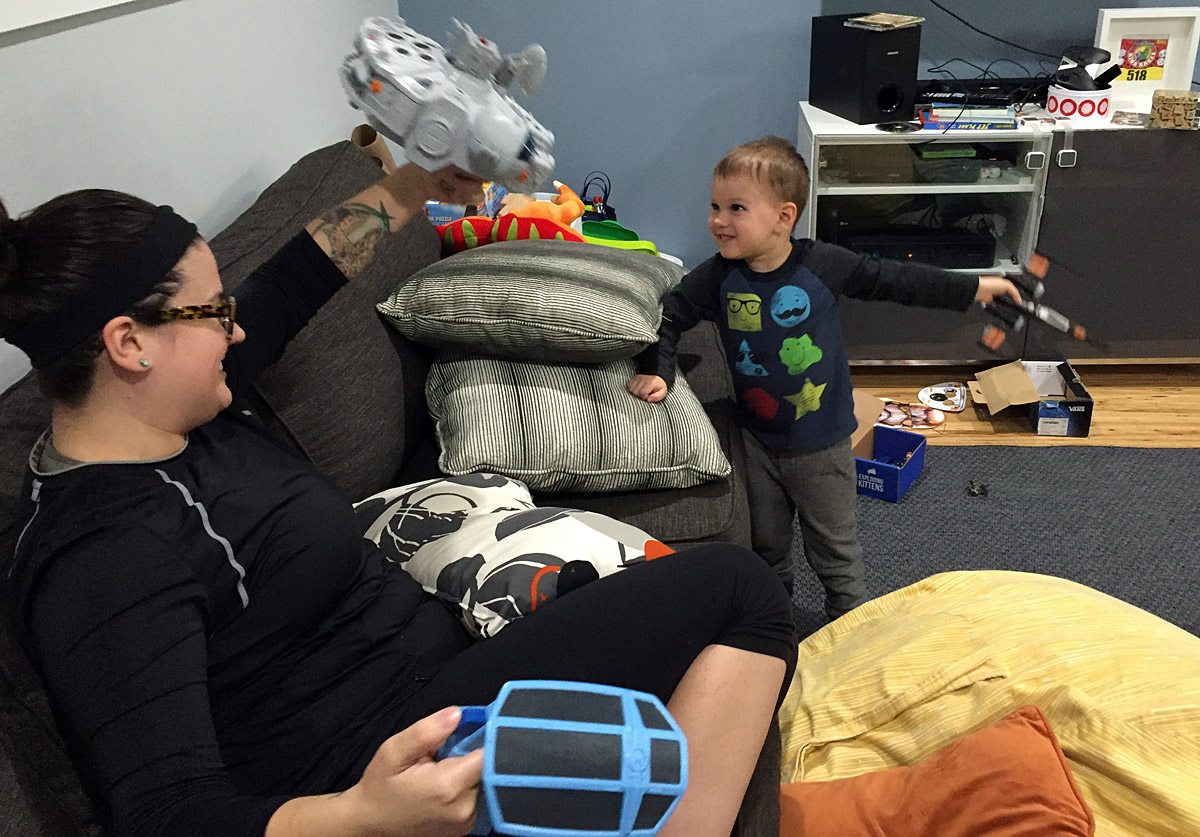 We immediately got to playing with the X-Wing as a family. The Galactic Heroes Millenium Falcon and TIE Fighter joined in the battle across our living room.