Right on the heels of the outrageously successful Pathfinder Roleplaying Game Humble Bundle, Dynamite Entertainment is offering its outstanding Pathfinder Comics on Humble Bundle as well. Almost every Pathfinder Comic created to date is available (I see one special release missing from the selection), and there is an icon on the Humble Bundle page indicating more comics will be added soon.

The comics are set in Pathfinder‘s world of Golarion and are mostly focused on the adventures of the Iconic Pathfinder characters. The Iconics are personalities created by Paizo to portray the quintessential representation of each specific role playing character class with one for every class in Pathfinder.

The first Volume published in 2012, Dark Waters rising, written by Jim Zub with art by Andrew Huerta is an astounding piece of work that helped kindle my interest in comics. I was never a big comics fan, but I have now read through all of the Pathfinder comics with my kids and we’ve enjoyed being able to play the game in locales, and against beasts, that are then represented in the comics. We revisit the issues frequently having them readily available digitally on various devices.

You don’t need to know the game to enjoy the comics. They are a fine stand-alone product depicting a high-fantasy setting.

Humble Bundle is a storefront that offers packages of mobile games, books, and comics at a steep discount with some of the proceeds going to charity. You get to choose how much of your money goes to the publishers, Humble, and to charity. Be sure to look for that setting during checkout. Humble offers various levels with more content being delivered for higher amounts.

The comics are being offered DRM free and in PDF, ePub, and CBZ formats that will work on many devices including, Kindle, iOS, Kobo, and Nook. 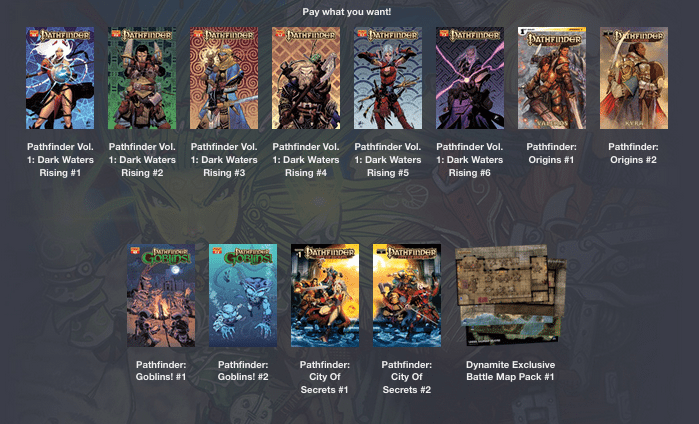 At the pay-what-you-want level you get the entire Pathfinder Volume 1: Dark Waters Rising, based around Sandpoint, the town where Rise of the Runelords Pathfinder Adventure Path is set (The latest Pathfinder Battles Miniatures are themed on the Rusty Dragon Inn from Sandpoint). You also get the first two issues from three more sets of Pathfinder Comics including Pathfinder: Origins, which focuses on the origin stories of the main iconic characters, Pathfinder: City of Secrets, following the heroes as they face foes in Golarion’s Magnimar, and the hilarious Pathfinder: Goblins! depicting stories of the little pyromaniac-psychopaths of Pathfinder. Both Origins and Goblins were authored by Paizo writers.

Last, in the pay-what-you-want level, you also get a Battle Map Pack depicting ten locations from the comics on one-inch grid for use in gaming. These can be printed for use, but are also great for virtual table top play. I project my maps onto a table for  face-to-face play, so this Humble Bundle is worth it for the available digital maps alone!

At the pay-more-than-the-average amount you get the entire second volume, Tooth and Claw, Pathfinder Hollow Mountain #1, as well as additional issues of Pathfinder: Origins, Goblins, and City of Secrets, and another Battle Map Pack. More comics will be added to this level on Wednesday March 9th.

At the pay-$15-or-more level, you get the rest of each of the series (Hollow Mountain is still in progress so you get the available issues 1-3), Battle Map Pack III, and two Humble Bundle-exclusive Battle Map Packs, Feast Halls, and Infernal Sanctuary.

These comics are a pleasure to look at with awesome art that depicts the Pathfinder world in an inspiring way. They make me want to go play more Pathfinder and I imagine they draw in many new players. Jim Zub’s writing in the first three volumes make these a joy to read and I have since discovered the rest of his work because of the Pathfinder series. Jim left the project after volume three, but left a great base of work for the Paizo staff to take over the helm. They have carried on the tradition with more entertaining, beautiful, and well-produced issues. I eagerly anticipate each one and when it’s available the kids and I sit down with our iPad and delve in for another adventure.

At full price these comics are well worth it, but at such a great bargain the Pathfinder Comics Humble Bundle is a no-brainer, providing an excellent supply of entertaining reading, and a great source of Pathfinder lore.

Want to play the game, or add some Pathfinder pdfs to your existing collection, check out the other Pathfinder themed Humble Bundle for an enormous supply of Pathfinder RPG materials.