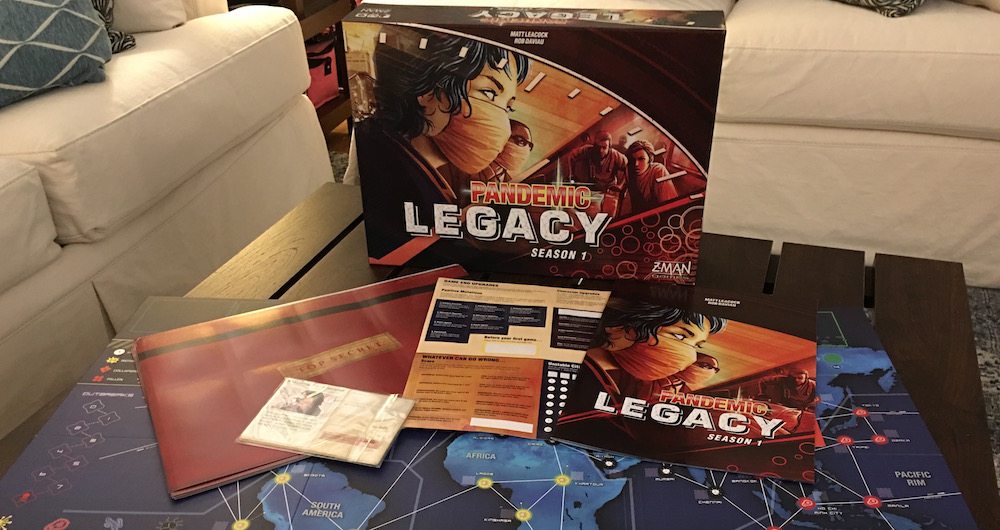 “You should go to London, reduce the infection there.”

I stare at my son across the board, trying to figure out if he’s got a plan or if he’s just trying to hog the glory with his Medic again. “But if I go to Hong Kong, I can wipe out the red disease next turn, and we’ll be perfectly placed to start taking out black.” I look at the board, the clusters of infected cities in Central Asia waiting to go off like a bomb.

“But if London goes, then Paris goes, then it’ll spread to New York.”

“That’s a big if. For that to happen, we’d have to have an Epidemic hit. I’m going to Hong Kong.” I move my Researcher and take the rest of my actions.

“I hope you don’t pull an Epidemic.” Nervousness and doom in my son’s voice.

I play out the Epidemic card. Mercifully, London somehow avoids an Outbreak. But as I move the tracker on the board up a notch, I notice the purple reminder marker on the Epidemic Track. We have to pull the next Legacy card. I do so and read it out loud. The last few words read haltingly.

My son has his face in his hands. “Does that mean what I think it means?”

I swallow and start looking through the Top Secret dossiers for the sticker that will seal our fate. “It means I should’ve gone to London.”

In Pandemic Legacy by Z-Man Games, your gaming group is a team of specialists tasked with eliminating four global viral outbreaks. Each round, you’re scrambling to find pieces of the cure and get those pieces to your far-flung compatriots, all while eliminating disease to prevent outbreaks. The game is working against you, adding more infection to the board each round and occasionally causing epidemics where those infected cities can get even worse. If you’ve played traditional Pandemic, this is nothing new.

What if the viruses stopped playing by normal rules and became harder to cure despite your best efforts? What if the cities you failed to cure started to riot, taking your research stations with them? What if your characters, traumatized by the events of the game, became less effective or were lost altogether? What if there were even worse fates, hidden away, as you played through one of your 12-24 tries to save the world?

Pandemic Legacy takes the classic game and turns it on its head, making every card flip, every decision, even more tense. Cooked up by the team that created my favorite game of 2014, Risk Legacy, the game asks, no, requires you to deface and mark up the board as you play. Many of the upgrades and penalties are apparent as soon as you open the box. There is a large sheet of stickers that you’ll want to look over, as it contains both the scars that your characters can accumulate as well as the beneficial traits they (and the viruses you’re trying to eradicate) can acquire. And even if this was all that came in the box, it would be enough to make Pandemic Legacy markedly different from the original game.

But that’s before you crack the seal on the Legacy deck. Think of it as a sadistic game master–in card form. The Legacy deck tells you when to go hunting for those game-changing stickers hidden in the Top Secret dossiers. It changes up the conditions when you’re falling behind. It prepares you for the next month of your mission. Like Risk Legacy before it, Pandemic Legacy has a limited lifespan–you get two tries each month of the game, for a maximum of 24 playthroughs. After that, you’re done.

And if you do lose a month? There are consequences. Hidden underneath the board are eight black doors to be opened only if your team fails to meet their monthly objectives. They’re large enough to be extremely tantalizing. Are they there to give you a boost on your next round? Are they going to make the rest of your games more difficult? Do they hold new pieces? New characters? New viruses? Anything (and everything) is possible. Still, given how gutting the first few turns of the Legacy deck were (and these were just for normal setbacks in a mostly regular game), I hate to imagine how severe the punishment will be for a loss.

And despite the Legacy deck and various options being the same for every copy of the game, Pandemic Legacy a truly unique experience. Consequences are the result of the decisions of each gaming group. Rewards (and penalties) will be argued over and rarely will the same ones be chosen. And while experience with the game will certainly help you if you play a new campaign or with a different group (there are red and blue boxes available so that you can play multiple campaigns and keep them straight), it’s likely that you’ll see conditions in one game that you’ll never see in the other and vice versa.

I’ve seen complaints online about the limited nature of Pandemic Legacy, but that’s only a consideration if you approach it like a regular board game. It’s much more like an RPG campaign where you’re shaping your characters and the world around them. You’re not just trying to level up or beat one game, you’re working with your team towards a common long-term goal. Pandemic Legacy is made for 2-4 players and is extremely playable with the minimum number. With two players, you start off with more cards in your hand, which gives you a leg up on curing those pesky viruses. Since my “gaming group” consists of me and my son, I’m always appreciative when I find a good 2-player cooperative game (especially since he’s developed into a very difficult to beat strategist).

We’re only one game in, but I foresee Pandemic Legacy easily being my favorite game of the past twelve months. Already it’s brought more intensity, camaraderie, and reward than any other game I played in 2015. If it hadn’t been for the first game taking us till almost midnight, we would have readily dove in for a second. There are a lot of games on the horizon for 2016, but, less than a week in, it’s going to be hard for them to beat the high bar being set by Pandemic Legacy. 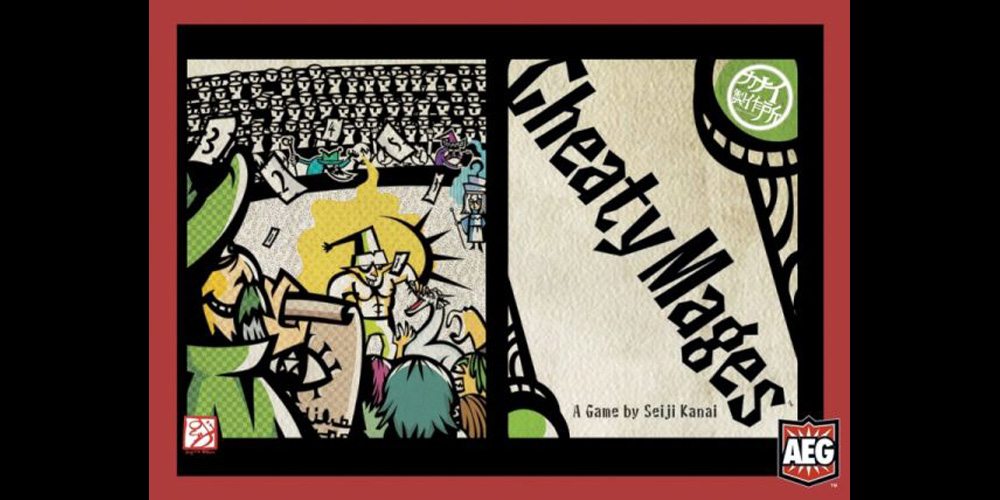 Cheaty Mages Is a Good Bet