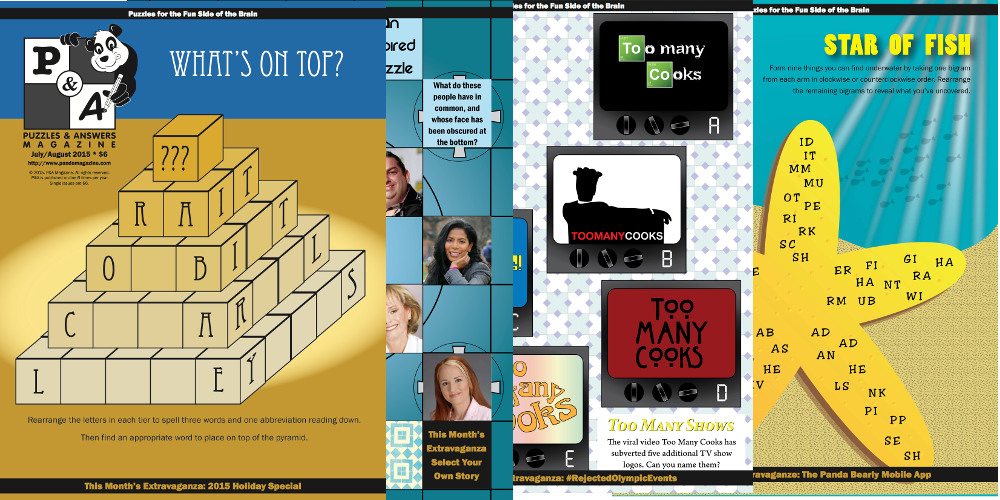 If you’re an American reader of this site, you’ve probably at some point come across Games magazine. It’s been running since 1977, bringing puzzles, articles, game reviews, contests, and more to eager subscribers.

Now imagine Games distilled down to just the puzzles, and make those puzzles more engaging, challenging, and unusual. You’d probably end up with something a lot like P&A Magazine.

I discovered the self-published, bimonthly puzzle magazine a few years ago via the National Puzzlers League mailing list; editor Foggy Brume is not only a former member of that organization but a frequent participant in the MIT Mystery Hunt. I’ve loved the magazine ever since my first issue. In fact, I started a puzzle-solving group at work just to expose more people to it. Well, and to get help solving it.

Each issue is divided into two main sections. The front is most reminiscent of Games: unconnected, straightforward puzzles of varying degrees of difficulty and with answers in the back. Good for a commute.

The back section, whose full answers don’t appear until the next issue, is where things get more interesting. Roughly a dozen thematically related puzzles yield a clue that feeds into another puzzle (called a “metapuzzle” or just “meta” in puzzle parlance).

Some of the puzzles are straightforward enough, though there’s almost always a twist to get you the clue for the meta. One recent crossword puzzle was normal except that some of the across and down clues were swapped. The letters in the intersecting squares gave you the meta clue.

Other puzzles are hard. Really hard. I recently solved a couple dozen short Vigenère ciphers and then had to figure out the proper ordering to get the meta answer. Many puzzles involve trivia that you probably don’t know. The invite for my puzzle group says, “bring your laptop.”

And some puzzles are just opaque. While you’ll find many standard forms in the back half — logic puzzles, crosswords, variety cryptics, acrostics, and so on — you’ll also find many that only exist right there in that issue. Or in such niche publications you’re not likely to have seen them. Colored-in geographical outlines. Things that look like Amazon reviews but really aren’t. Mysterious circles of dots circumscribing odd mixes of polygons and lines. And there are rarely instructions. Some are even what my puzzle club calls “arts and crafts” puzzles: Cut out pieces and start gluing.

If a wide range of hard, interesting puzzles is your thing, you’ll almost certainly like P&A. There’s a sampler you can try for free (from which the puzzles in this article are drawn), though I find the actual issues to be deeper. Once you register, you can buy individual issues for $10 each or subscribe at $50 for the six issues in a year.

And if you, like me, find it difficult to finish the puzzles, have them available at your next games night for when people are waiting their turn. Or invite friends over just for solving fun. Groups can solve puzzles that individuals often can’t.