This brand new feature by Insight Editions displays the world view and inside life of Wonder Woman, following the latest New 52 events. 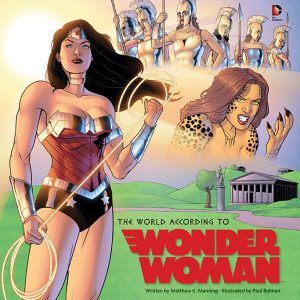 “I am the Queen of a tribe of forgotten women called the Amazons. I am the God of War. I am the Super Hero known as Wonder Woman. I am all these things, but first and foremost I am simply Diana.” 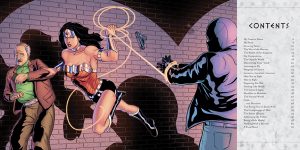 With these opening words, and with her own voice, Diana describes her origin, why she left Themyscira, and the friends and foes she has met in the human world.

With interactive features and beautiful images, this book is aimed to young readers who would like to have a taste of Wonder Woman’s world according to her personal views and beliefs. In many ways, I would think that her voice in these pages would prove inspiring to many young readers, be it boys or girls.

However, reading this book confronted me with a lot of issues I have with the New 52 storyline. Since 2011, (SPOILER ALERT, for those who haven?t read all of it, and are still willing to) Wonder Woman has shed her history and, according to Brian Azzarelo?s version, discovered she is not made of clay. Her mother had been hiding the fact that she and Zeus, god of Olympus, once were lovers. To hide from Hera?s wrath (a pitiful character in the length of the series), Queen Hippolyta marks her as different and tells the world no man had anything to do with her birth.

Playing along these lines, and after the usual bloodshed characteristic to Greek myths, Wonder Woman discovers more awful “truths” about her sisters and godly siblings. For example, the Amazon warriors take over human ships to make love with the men, and then keep the girls and throw away the boys. Apollo wants to destroy his last brother, born of a human mother, to prevent him from seizing the Olympus throne. Also, to save humanity from a terrible foe, Wonder Woman must kill her mentor, the God of War, and become God of War herself. All these events are to some extent described as facts inside this book, and Diana explains them as inevitable. 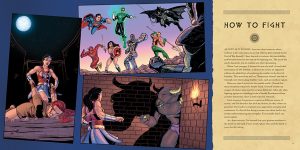 The book also displays many current DC characters, including the members of the Justice League, other superhero girls and women such as Katana and Supergirl, and enemies she has fought over the length of the series. 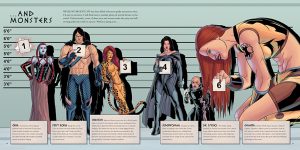 Insight Editions has done a beautiful job. It’s not their fault that this new origin is so controversial. Going along with it for the sake of continuity is fine. But I?m with Alan Sizzler Kistler in this one: in his article “Wonder Woman?s New 52 Origin Should Not Be Used in Film (or At All)” he gives several reasons why this should not be so, and I am going to quote heavily from him to support my own points.

First and I totally agree:

It feels too much like the origin was altered to make Diana more understandable to men and hetero-normative standards. I also can?t help thinking the new origin was intended to justify how, outside of her own series and the new Sensation Comics anthology, most New 52 stories focus on Wonder Woman as a warrior with little interest or understanding that she can also be something else.

Diana?s traditional enemy was the God of War, because he liked confrontation so much. She has the power, indeed, but she is not a generic female warrior with little conscience. She is all about conscience and understanding, peace and a message of superior knowledge. She is an Ambassador of Peace, and now has become the God of War itself. It is, at the very least, counterintuitive.

Second, by shedding her past, the new origin alters the view we have of her sisters. They now look ancient, using outdated technology, always envious of the god-like powers Diana possesses–casting her out and leaving her without the love and understanding she had as a group. By calling her “clay” her sisters now mean to bully her, giving the impression that their coldness towards her somehow chased her out of her own island.

What about the basic story? Why did it have to change so much? As Alan says in his article, Diana loses a lot by losing her sisters support.

[She was…] a girl immaculately born via love and magic, raised by a group of amazing women whose society represents both the future and the past, raised to be an intelligent, compassionate and formidable woman who is equally a warrior and a teacher. That last part is key. She likes a good fight, but for the sport and competition rather than violence and combat glory.

Thirdly, the new weaponry and uncontrollable godly powers she now possesses seem to me less of a dramatic necessity but a commercial one. If you?ve followed the controversy we’ve had here on Geekdad about Star Wars‘ Rey and the toy aisle gender distribution, it occurs to me that this is for the benefit of the boys (as marketing sees them, not as they are). The sword goes with the toy, not the character or the story itself. Here?s what Sizzler has to say about that:

Let?s be clear, I?m not against Wonder Woman ever having a sword or armor. I think that can be very cool, just as it?s very cool when Batman sometimes gets to have a sword fight. But I think those elements should be used to emphasize that certain battles are more serious than others, or more epic. If Diana is always walking around with a sword, it becomes less special. Not only is she powerful enough to not need it most of the time, but there?s an added problem when several artists draw her carrying a sword but without a scabbard. It visually signals that she?s itching for a fight, looking for an excuse to shed blood. Even Wolverine doesn?t walk around with his claws out all the time.

In a very irksome way, that I cannot explain exactly, Diana has shifted since the New 52. It seems that a woman cannot be powerful if she is not, at the same time, out of control, enraged, or dangerous. That is definitely not the Wonder Woman we know and love. She is a symbol of peace, a powerful ally because she is a compassionate one. And we do need more compassion. Look at her own words, (from a story by Gail Simone): “We have a saying, my people. Don?t kill if you can wound, don?t wound if you can subdue, don?t subdue if you can pacify, and don?t raise your hand at all until you?ve first extended it.”

We need to hear her voice now more than ever. 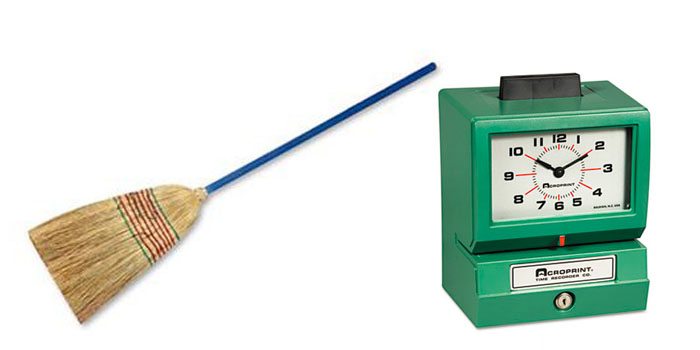