The Wizard World Comic Con was held last weekend in Tulsa, Oklahoma. This was my family’s second time attending, and we had a blast!

I have been a comic fan all my life, but have only recently began to attend conventions. As my daughters get older and more interested in fandom it is more fun each time we go. Of course, I have to make some sacrifices for the good of the family.

Last year my wife was unable to attend. I took my girls, who were dressed as Gamora and Harley Quinn, on our first road trip sans Mom. It went surprisingly well. However, as an only parent with a five- and eight-year-old, I had my head on a swivel making sure I knew where they were at all times. I think my anxiety of watching out for the girls may have cut into my fun a bit, but the girls had a blast and couldn’t wait to go back.

Fast-forward almost a year, and I was unsure if we would make it to the Tulsa Comic Con this year as things have been pretty hectic with our schedule. A parent-teacher conference would change that. My daughter’s first grade teacher gave me a story that my youngest daughter had written. It ended up being a story about our Tulsa trip from last year. This was the final page:

After eleven months she still thought enough of the trip to write a story about it. We were definitely returning this year.

This past summer I had created some Star Wars Rebels costumes for the girls (Sabine Wren and Hera Syndulla) for our local convention, Smallville ComicCon. The girls were excited to show them off in Tulsa. They felt so special every time someone asked to take their picture with them. One of their favorites was Finn and Rey from Star Wars Episode VII.

My wife, Candace, made the trip with us this year. She enjoys science fiction and comics as well. She especially loves Doctor Who. I was able to take in more of the convention since I had some help with the girls. I still have yet to attend a panel, however. We could only attend on Saturday, and there were a few interesting ones during our time there. Jason Mewes was speaking (I am just guessing that wasn’t too family-friendly), and there was also a panel on low-budget costume-making. Having recently created the girls’ costumes, I was very interested in checking this one out, but I am sure the girls would have gotten restless. My wife offered to take the girls while I checked out some panels, but I preferred to hang out with them. Maybe next year…

On the way to Tulsa, I got a text and was given a mission. My niece really wanted to go to the convention. She is a big fan of Once Upon a Time, and especially the character Tamara, played by Sonequa Martin-Green. Many readers will also know her as Sasha Williams in The Walking Dead. Ms. Martin-Green was in attendance, and I was tasked with getting her autograph. My daughters have never seen either show, but they were excited to meet a famous actress. I cannot say enough nice things about Ms. Martin-Green. She was incredibly nice to my daughters, complementing them on their costumes and just engaging them in general. My girls still talk about how nice she was!

There were several other stars of media in attendance. One of the big draws this year was Norman Reedus, also known as Daryl Dixon from The Walking Dead. He was also there last year, and was insanely popular. This year I saw a tremendous line for autographs, and assumed it was for him. Instead, it was for the Undertaker from WWE. Mr. Reedus was out at the time, but I have no doubts that he continues to draw huge crowds.

Now it was time to check out all of the amazing artists who were in attendance. 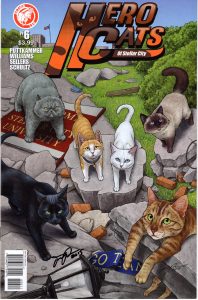 The first artist to grab the attention of my family was Jenny Parks. We are cat-lovers at my house, and Jenny’s ability to combine realistic cat portraits with beloved characters from science fiction and comics was incredible. While the girls wanted much more, we walked away with a couple of metal bookmarks and a signed copy of Hero Cats of Stellar City, which had a cover drawn by Ms. Parks. Finding another family-friendly comic series that my girls can get into was a nice bonus!

Next we discovered the art of Bianca Roman-Stumpff. She has a very fun, whimsical style. My wife loves flying pigs, so she couldn’t resist this print.

Unfortunately, I did not find any must-have artwork. I did, however, score a Wizard World exclusive The Walking Dead #1 by Billy Martin. These were given out free with paid admission. Those purchasing the three-day pass were also treated with a black-and-white sketch cover.

One of the things that my girls and I are always on the search for at conventions is LEGO minifigures. My oldest daughter was very excited to get a Sabine Wren figure to match her outfit. My youngest was equally excited to get Ahsoka Tano, even though there was not a Hera figure in sight.

The 501st Legion was in attendance. In addition to showing off their terrific costumes, they were raising money for charity. For a small donation my girls got to shoot several NERF darts at a Stormtrooper!

I also spoke to some of the Mandolorian Mercs, including Chris from Tulsa Star Force. They shared with me some of the weapons they created, and also recommended creating armor from plastic. I created my daughter’s armor from EVA foam. I intend to follow up to learn more about that method. Who knows, maybe I will be in costume next year!

All in all, another great convention and we are already counting down until next year!