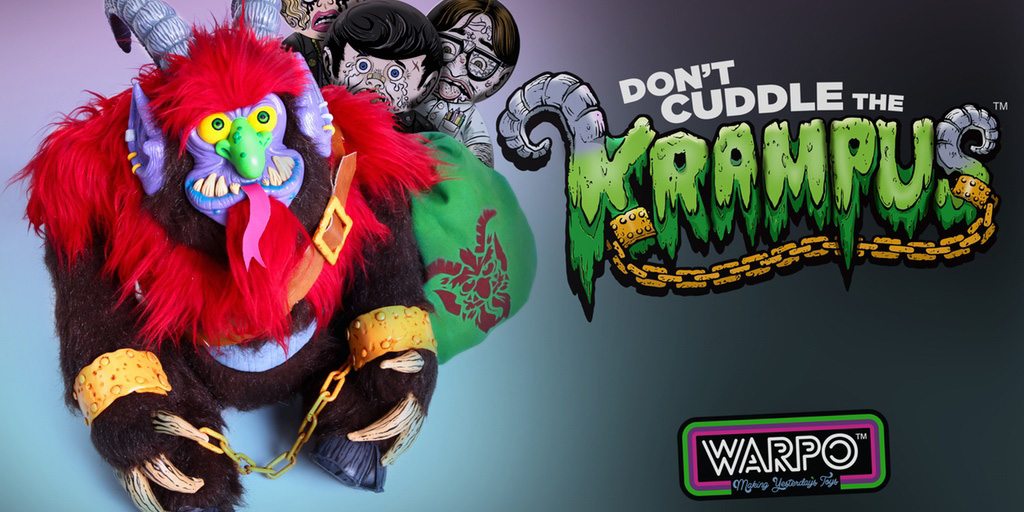 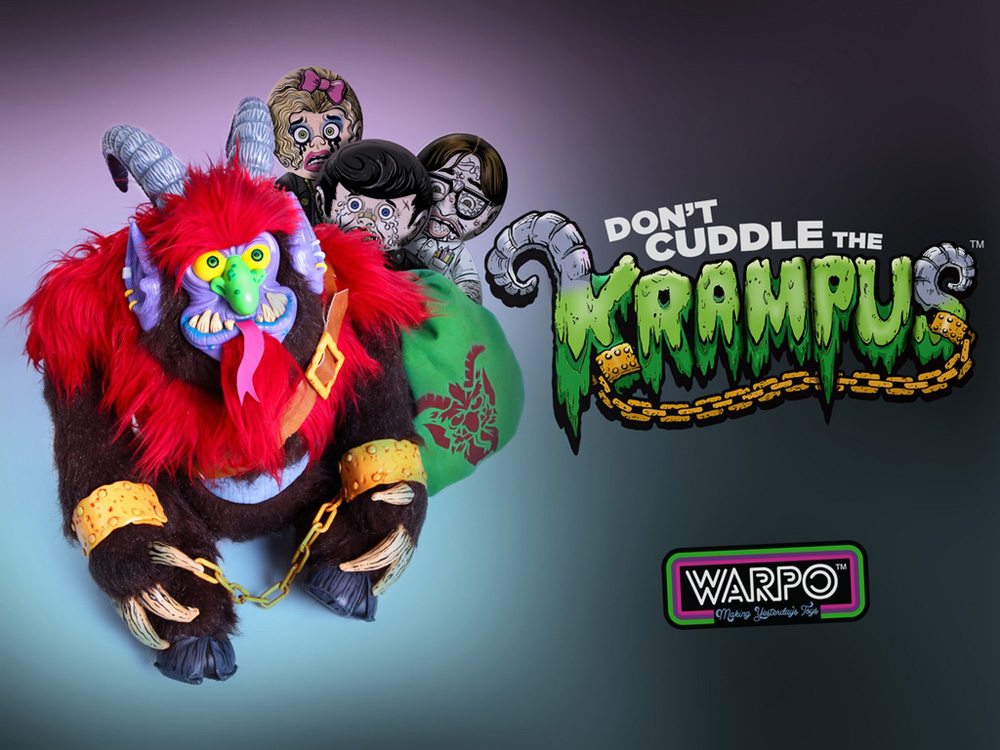 Warpo, the company that brought us the Legends of Cthulhu action figures, is back with another Kickstarter campaign! Now you can get a plush Krampus, complete with three naughty kids and a sack to carry them.

This summer when I interviewed Bryan Katzel, president of Warpo, he told me he was really excited about the next toy line but wouldn’t give me any details. I assumed it was going to be another line of action figures, but from a different pop culture world. Guess I was wrong! Just as the Legends of Cthulhu toys were designed to look like an artifact from the ’70s, the new “Don’t Cuddle the Krampus” toy is inspired by the ’80s.

As Katzel points out in the Kickstarter video, there were a lot of gross-out toys in the ’80s, like Madballs, Boglins, Gremlins, and My Pet Monster. (I had totally forgotten about Boglins, but that brief mention brought back some memories … I wonder what happened to my old Boglins?) The folks at Warpo felt that this was the perfect era for a toy based on the legend of Krampus.

Don’t know who Krampus is? Well, he’s sort of the anti-Santa. Santa gets to reward all the nice kids with toys at Christmas. Krampus–he deals with the naughty ones, throwing them into his sack, or whipping them with switches or chains. There’s even a horror movie coming out this year based on the legend of Krampus. Yeah, not somebody you want to see arriving on your doorstep on Christmas Eve! But perfect for the bizarre sort of toys that were made in the ’80s.

I love that this plush Krampus was designed by two folks who actually worked on My Pet Monster: Jim Groman and Donna Miranda. Groman did the design, and Miranda created the plush patterns. The final toy is a combination of plush figure with rubber face and horns, and printed vinyl claws and hooves. He’s got manacles and chains, plus a strap around his chest that holds his bag of kids. Yep, and there are three naughty kids to throw into that sack, too. 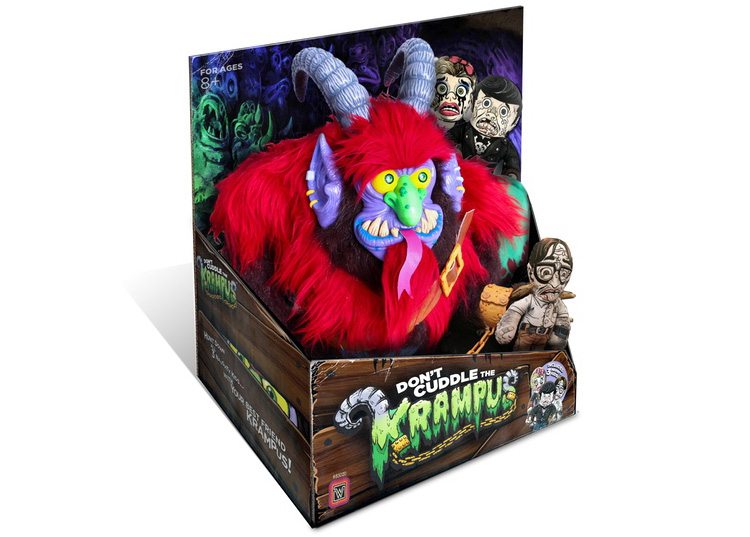 Warpo’s attention to detail is superb. The packaging even looks like something from my childhood.

With the Legends of Cthulhu figures, they created some extra add-ons like coloring books and a collectible diorama. But for this line, they’ve gone all out: stickers, mugs, wrapping paper, storybook with audiocassette, sweatshirts, card games, and even a cereal box! Looking at their page reminds me a little bit of watching Toy Story 2, when Woody comes across all the memorabilia and realizes he has a long history. Warpo has done the same thing here, crafting a history for this toy. All they need now is a Delorean so they can take it back to 1985 and put it on toy store shelves. (Stretch goal, perhaps?)

Of course, newly minted nostalgia comes at a price: the Krampus is $80, with higher pledge levels for additional goodies. And you’ll have to wait until next year–estimated delivery is October 2016. Warpo did deliver their Cthulhu action figures on time, so they’ve got at least one success under their belts.

For more information, visit the Kickstarter page–and be sure to watch the “old” TV commercial for Don’t Cuddle the Krampus! 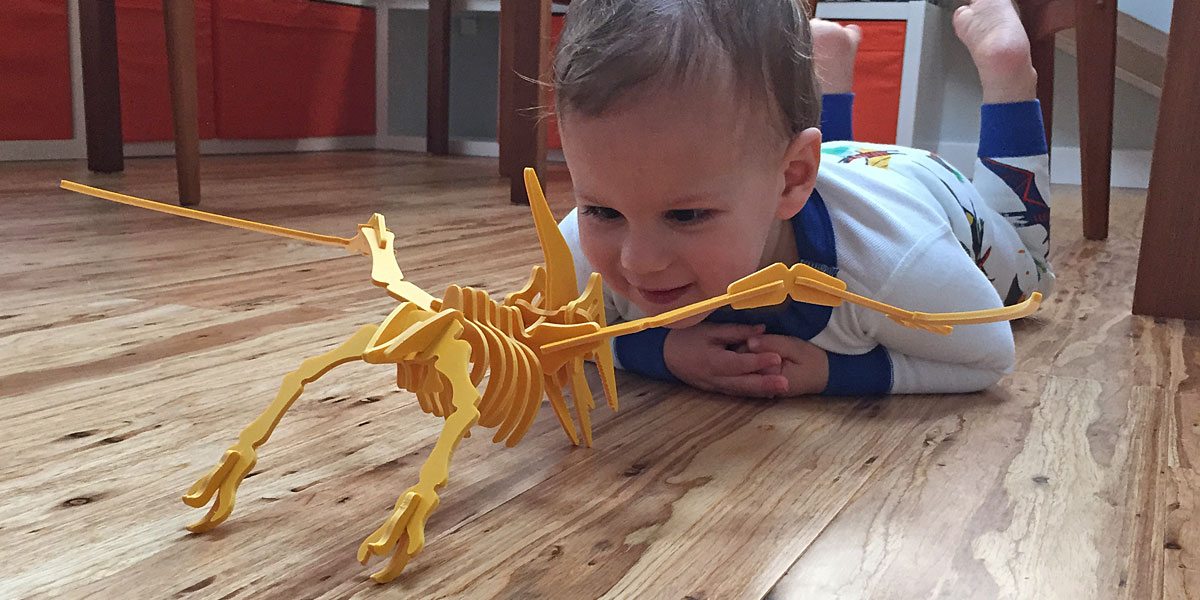 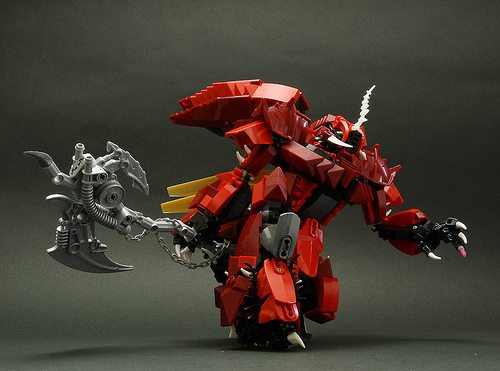