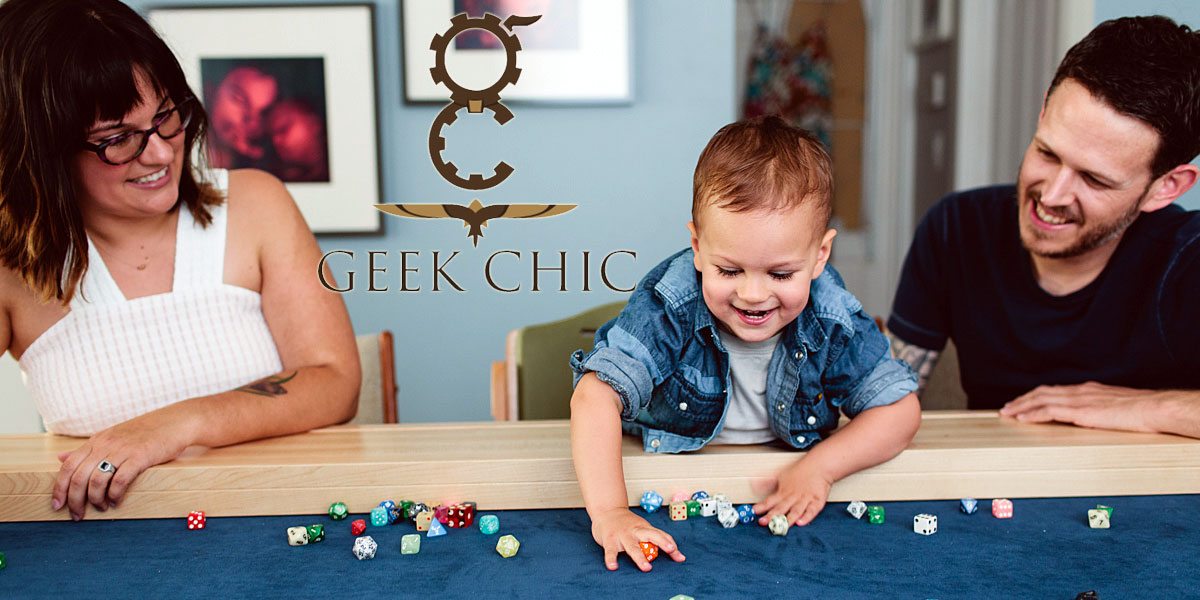 Geek Chic is, by now, well-known for their custom-made to order high-end gaming tables and furniture. We covered them a few years ago when GeekDad Dave Banks ordered his Emissary table, but I recently received my Minimalist table and thought an update was in order.

I don’t want to re-hash a lot of the ordering process because, surprisingly, even after three years, although wait times have gotten a little longer from order to delivery, not much else has changed. Geek Chic’s customer service is still awesome. They spend a ton of time with you placing your order, confirming your order, and helping you customize your table to be exactly what you want. They even do amazing follow-up after delivery to ensure you’re happy and that you have detailed care instructions. These tables are a major purchase after all.

With all the time we had for planning our gaming area, we not only put in some shelving to store our games, but we designed and made our own custom rug using FLOR carpet tiles.

Our Minimalist came in, carefully hand delivered by Geek Chic employees in lots of foam and crates and straps. After a few minutes of careful unpacking and assembly, our table was ready to go. The guys who delivered and setup the table also went through great detail on how our table worked and how to “transform” it.

Ruth, who also helped Dave, actually made a design suggestion that we’d never considered, and that we absolutely love. We were just going to get plain straight legs and match our accessories (cup holders and desks) to our table, when she suggested getting facets in the legs in an alternative wood. We love the way the walnut facets and accessories contrast with the maple table. This is the default setup for our table–all the leaves in, ready for any table using needs.

However, when its time to play games, our table transforms into a nice six-person gaming arena. Four of the leaves come out and the rails and end desks go in. This gives everyone a nice raised area in front of them for papers, books, etc. but still provides plenty of blue velvet playing space for dice, cards, or miniatures. The cup holders and side tables are completely removable and can be placed anywhere around the edge of the table for better comfort and usability per player.

Our table does have several other configuration options I didn’t photograph. All the leaves can be taken out to maximize the velvet play area. The velvet does go full edge to edge. We haven’t ever needed that much play space though and don’t feel its worth the sacrifice of having a hard surface around the entire table. There is also a full edge to edge plexiglass surface beneath the velvet. We haven’t used it yet, but it can be drawn on with wet or dry erase markers and is a great surface for drawing maps, keeping score, etc. especially if you do a lot of miniature gaming (since it’s transparent, you could even put a map underneath it then write on the plexiglass itself–perfect for keeping track of things between sessions).

We opted for the Minimalist table for two main reasons–it was less expensive than some of the other models and when not in use, it’s fairly unassuming but still a beautiful piece of furniture.

As amazingly well crafted and beautiful the table is, I do have one thing I’m not thrilled about. When the table has all the leaves in, the rails and desks have to be stored elsewhere, and vice versa when the leaves come out. I realize with a table this streamlined, it doesn’t make sense to have any storage for those extra pieces built-in, but it’s just not something I had really given much thought during the ordering process. Knowing what I do now, I may have changed my configuration of leaves and desks slightly to minimize the amount of “extra” pieces I needed to store at any given time.

That being said, it’s still not enough of a negative to make me regret the table at all. Just look at my son’s face when he gets to play on it. What more could anyone ask for in a gaming table?

5 thoughts on “The Minimalist: My Geek Chic Gaming Table”