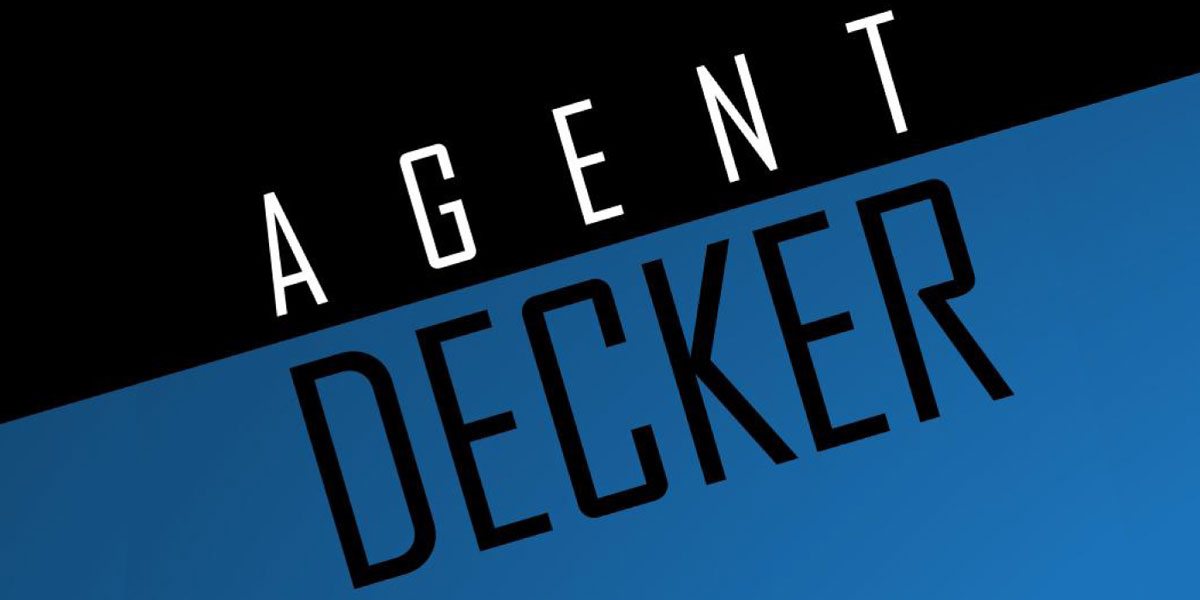 Table for One is a series focusing on solo tabletop gaming. The series will cover two flavors of solo games–games designed to be played by a single person exclusively and games that are multi-player but have a solo version. Today’s game is Agent Decker by Manuel Correia, a competitor in the 2015 Solitaire Print and Play Contest.

I didn’t realize going in to this contest that there would be so many games, many of which require components that I just don’t have since I don’t have a very extensive game library. Unfortunately, that will mean I won’t get to play as many of the contest entries as I’d like, but I will try to get through as many of the easiest to print and play as I can before voting ends on September 13.

On that note, visit the Agent Decker BGG page to get the files for yourself. Agent Decker only requires you to print 6 pages of cards (54 cards total) and have two counters (I used a coin and an ibuprofen.) You don’t get much simpler than that! Although there is a low ink version, I opted for the full color cards since there were so few of them.

Although the two pages of instructions are very easy to follow and give a great summary of all the card features and game play, Correia created a great, quick gameplay demo that will get you up to speed and playing even quicker. I highly recommend checking it out once you’ve printed out and prepped your cards.

The story behind Agent Decker is that you are a brand new secret agent on your first mission. Your goal is to infiltrate a building, working your way past guards, dogs, alarms, etc. The 54 cards are divided into mission cards, obstacle cards, your initial cards, and an alarm card to keep track of the current alarm level during the game. 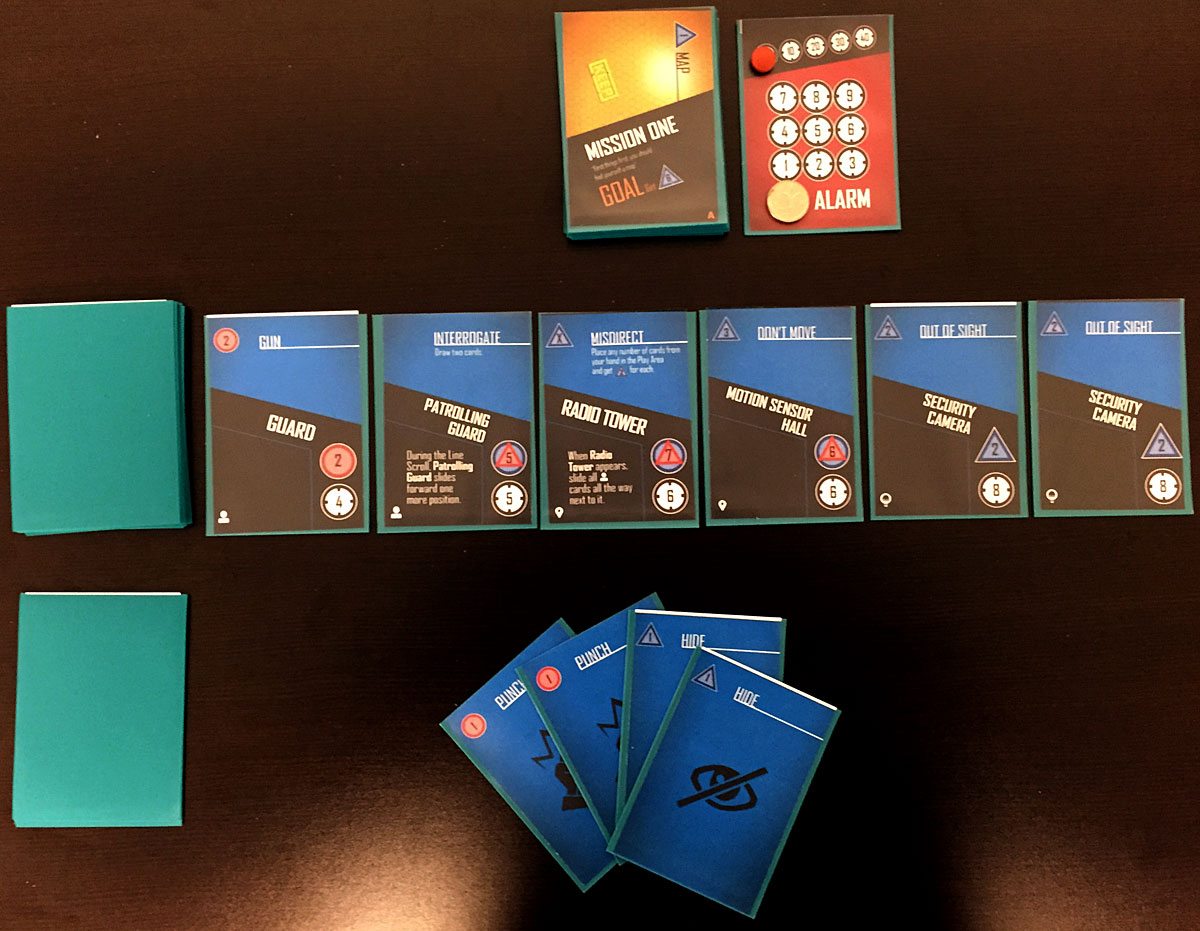 Game setup is very quick and simple. A Mission Deck is built of six missions and several new obstacles that will get added to the obstacle deck after completing each mission. The alarm card gets two counters placed on it to track the alarm level. The obstacles deck is shuffled and six cards are placed in the “line.”  Your initial cards are placed into a deck and four cards are drawn to make your starting hand.

Game play seems fairly straightforward at first–each obstacle card as a number of stealth and/or fighting required to defeat it. If you defeat an obstacle, you can add the card to your deck and you’ve just increased your abilities; however, there are three things to consider that add a lot of strategy to your decisions about defeating and taking a card.

You have the option to just knock out an obstacle versus defeating it. This flips the card over but leaves it in the line. Because the last card in the line moves to the discard pile and raises the alarm, leaving knocked out cards in the line can help keep your alarm level down. Any card removed must also be replaced, so defeating a card and moving it to your hand means the line moves faster. Also, when the obstacle pile runs out, your game is over as you ran out of time to complete the mission. So leaving a card in slows down how fast the pile burns down. Lastly, you want to think about how many cards you have in your deck. Not only will it mean a lot of cards to go through to get to ones you might want or need, but it also means less obstacles on subsequent missions. 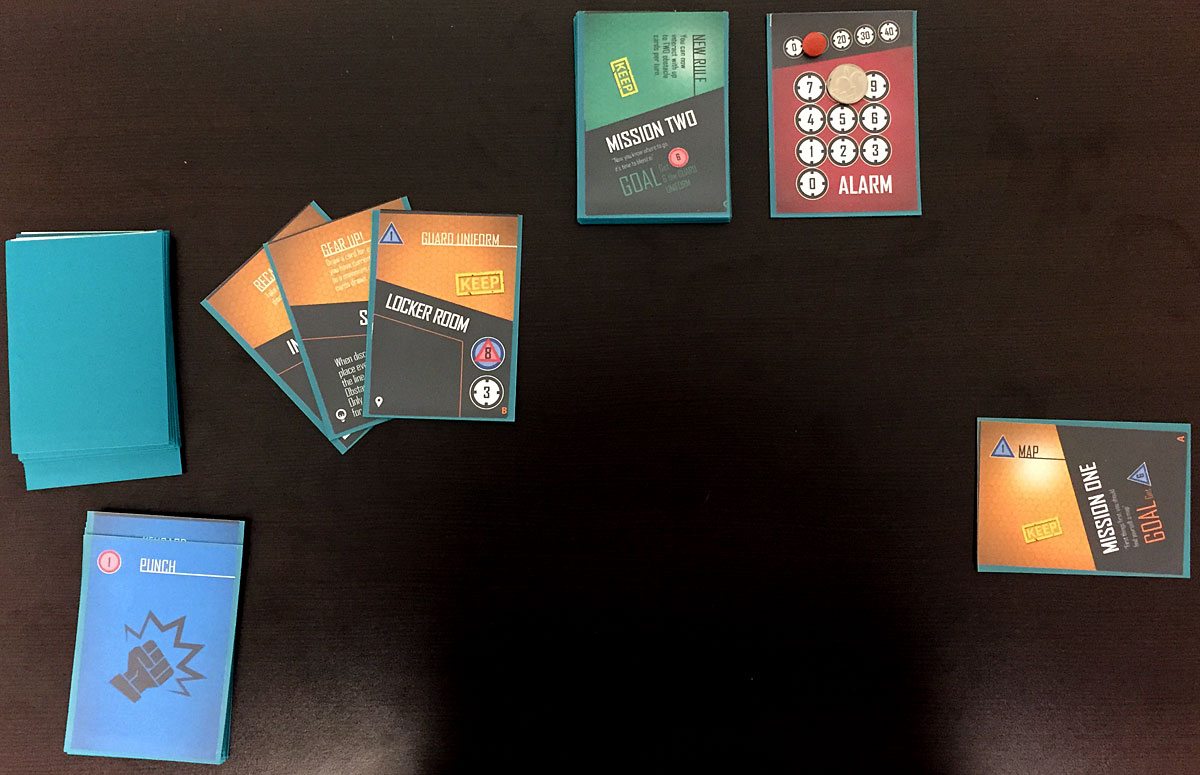 I actually had to play Mission One quite a few times before I made it to Mission Two mainly because I kept taking too many cards and then couldn’t get to what I needed to complete the mission in time. But when I finally tried to balance only taking what I needed and doing more knocking out, I successfully completed Mission One with an alarm rating of 18. At the end of each mission, you add the mission card to your keep pile (in the case of Mission One it gives you a Map which is worth one extra Stealth each round) and then add the related mission obstacles to the obstacle deck. The alarm gets reset for each mission, and then play continues the same way. 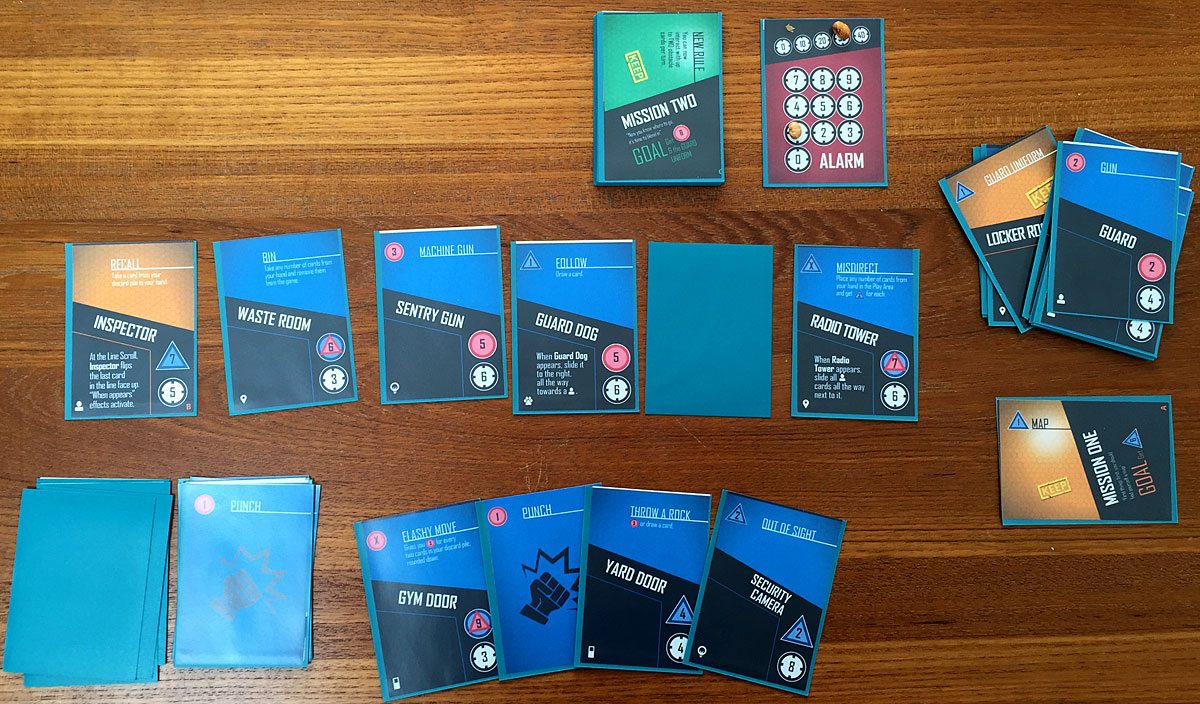 Mission Two seemed like it would be pretty easy–get six fighting resources plus the Guard Uniform item. Unfortunately, I was unable to get the guard uniform my first try, so I failed the mission. Once you fail a mission, everything gets reset back to step zero. 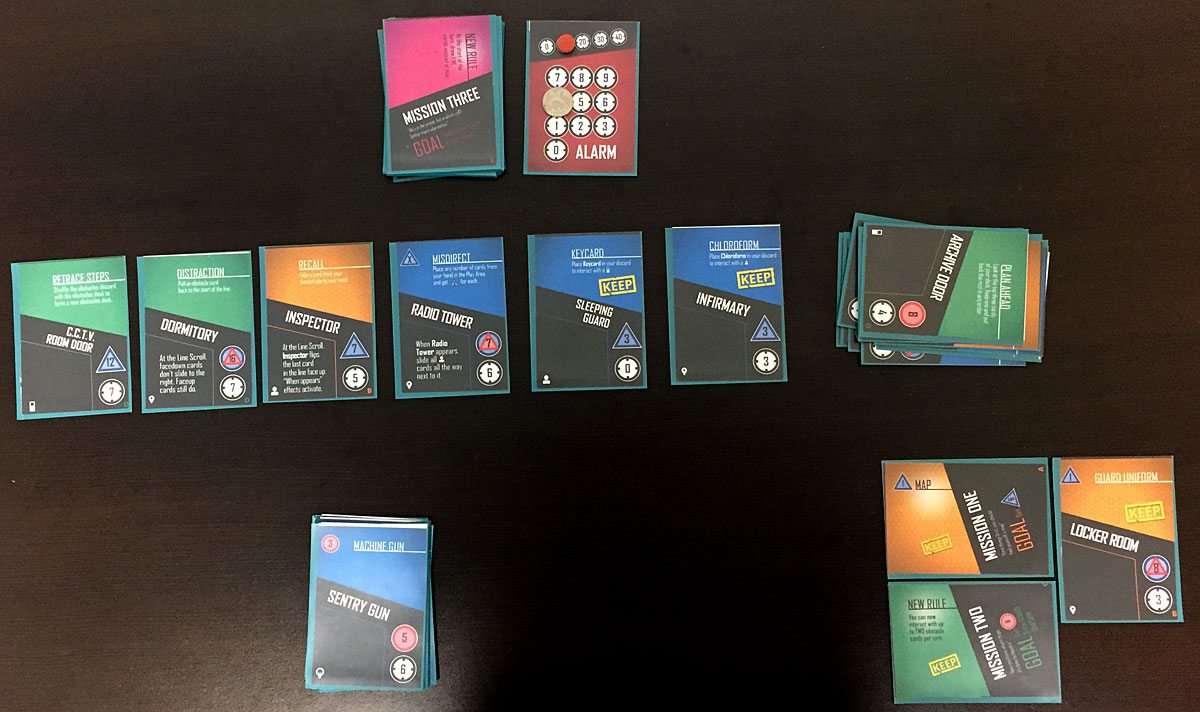 After several more playthroughs, I finally succeeded at Mission One and Mission Two. Mission Three sounded even easier than either of the previous two missions–I just needed to get a hand of seven cards. Each turn you only draw four cards but there are several obstacle cards that allow you to draw more cards. Unfortunately, even though I kept the alarm pretty low, I just didn’t get the right draw of cards and burned through the whole obstacle deck.

Now, there are a lot of games that I’d get frustrated at not even being able to successfully complete 50% after this many plays, but Agent Decker is not one of them. There is so much finesse to the strategy of selecting the right cards to add and keep in your deck tempered with just a little bit of luck when it comes to the drawing of cards, and the game is so fast and easy to set up and play.

I’ve already played a couple dozen games of Agent Decker, and I almost wish I didn’t have a list of other contest games to play so I could keep playing it more. At only 54 cards, Agent Decker is easy to carry and is definitely going to be a game I keep on hand in my bag at all times. I highly recommend checking it out!

Joke Fit for a Geek

1 thought on “Table for One: ‘Agent Decker’”