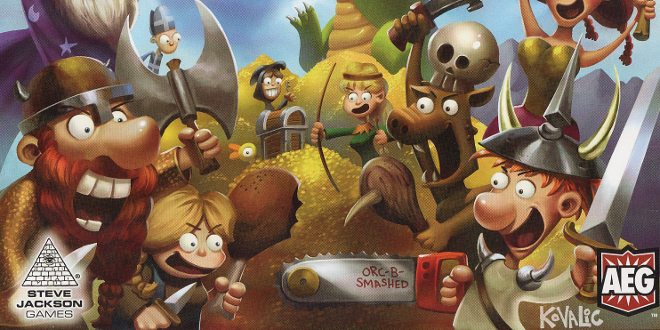 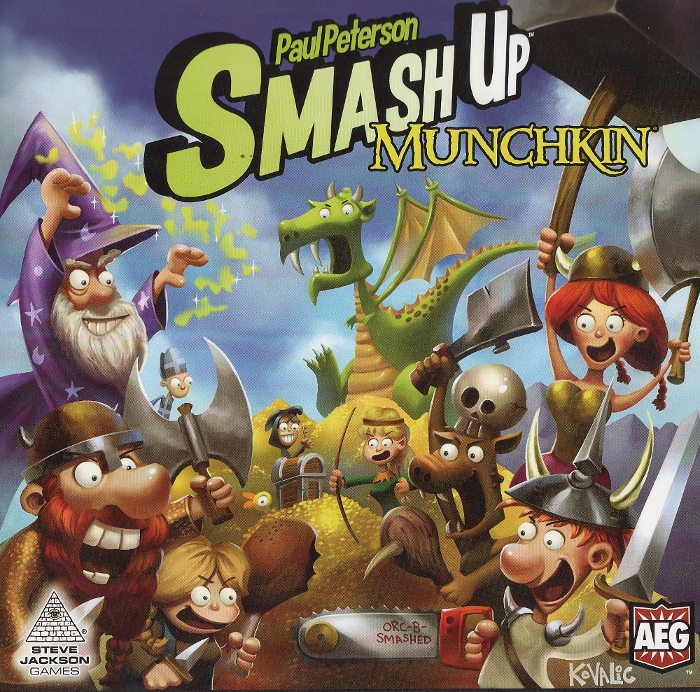 I don’t get to play Munchkin as often as I’d like to, but I’m a big fan of the writing and artwork that goes into every version and expansion of the game. And since I’d never played AEG’s Smash Up, the opportunity to play this year’s new combination of the two–Smash Up Munchkin—was one of many Gen Con 2015 treats.

Setup and basic play are in the format of the original Smash Up, detailed here by Jonathan Liu, and we’ve written about the game enough that I’m just going to focus on what the Munchkin aspect of this set brings to the table, rather than rehash the core gameplay.

Nothing has changed from the core mechanic of Smash Up–beating the bases and earning victory points. The Munchkin edition adds a slew of familiar and well-loved elements from the Steve Jackson card game: treasures, monsters, cheesy geek jokes, and the art of John Kovalic.

Smash Up Munchkin features eight factions–Clerics, Dwarves, Elves, Halflings, Mages, Orcs, Thieves, and Warriors–which Munchkin fans should recognize as corresponding to races and classes from the card game. There are no race/class restrictions on choosing your combination in Smash Up, though: Elf Halflings and Dwarf Orcs and Mage Warriors are perfectly acceptable combos.

Munchkin-style treasures and monsters add a new twist to the gameplay in this version of Smash Up: to each base card, you’ll be adding monsters that increase the score required to defeat the base, and often have other effects as well. Through various actions, monsters can be defeated individually, earning treasure cards for the player who does so. There are also ways for players to take control of monsters on occasion, so that the monster’s power value counts against the base rather than in its defense. The monsters can pile up pretty quickly on bases, making for some daunting takedown goals, particularly early on in the game.

One thing that’s worth noting–and which I’m not sure was totally clear (at least to me) when Jonathan, James Floyd Kelly and I played at Gen Con–is that the monsters and some treasures are also considered minions, whether or not they’re actually under control of a player. Yes, it says so right on the card, but, the way we set up the game, that reminder was covered up. (So, for instance, if a card says “destroy a minion here,” it seems you could use it to either knock off another player’s minion, like you would in standard Smash Up, or you could kill a monster and get treasure as well, if I understand correctly. It also seems that it means that cards reading things like “+1 to all minions here” would boost the monsters as well as the player’s minions.) I don’t recall making careful note of that during our game, but, then again, I was pretty busy getting my Elves-Thieves’ butts kicked.

Smash Up Munchkin comes with eight 20-card faction decks, 20 monster cards, 22 treasure cards, and 16 base cards. The box also includes 10 plastic deck dividers for sorting factions, monsters, and treasures, which are useful if you’ve got the Big Geeky Box or some sort of similar storage solution.

Like existing Smash Up expansions, you can combine the cards from Smash Up Munchkin with the original Smash Up and all the rest. The instruction booklet does point out that, with the Smash Up world now up to 37 factions, a game’s base deck should be built using only the bases from the sets of the factions in play, since each set comes with bases designed specifically for use with its factions. (If you just shuffled all 74 bases together, chances are slim that players would get to see the bases best for the factions they’re playing–there wouldn’t be as much fun in using Smash Up Munchkin factions, for example, in a game that never sees a base involving monsters and treasures.)

I really enjoyed the pairing of Smash Up and Munchkin, which feels natural, given both games’ sense of humor, numbers-building strategy, and good-natured interference with other players’ efforts. For Munchkin players who’ve never given Smash Up a try, it’s an obvious gateway. And since it comes with eight factions, it works fine as a stand-alone game without other expansions. Retail price is $34.99.

Disclosure: GeekDad received a review copy of Smash Up Munchkin.

Legend: A New Take on the D20 Rules

Training Your Dragon on the Go