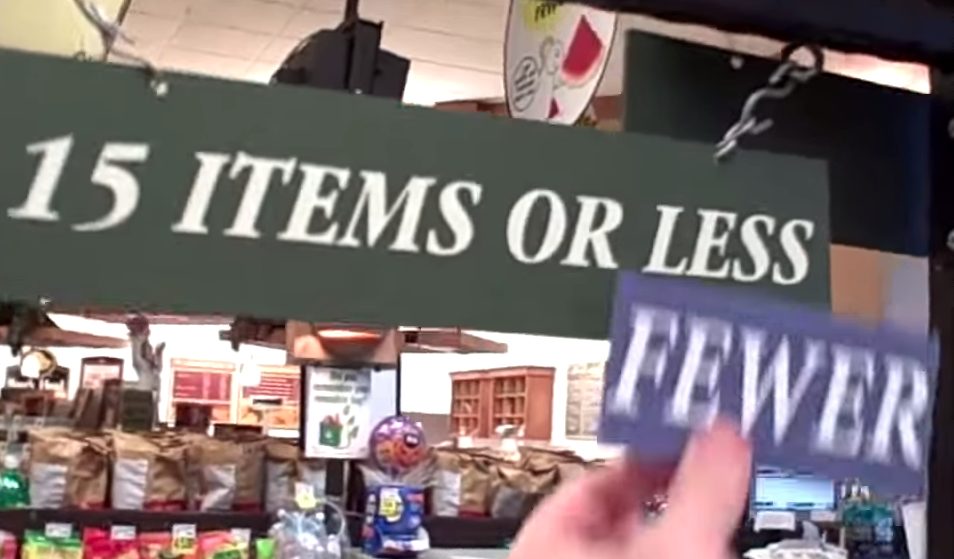 The GeekDads recently got into a lively discussion about the use of less versus fewer, and how to teach it to our kids. Here are the rather amusing results of that chat session:

Randy Slavey: Now, ask me about “few vs. less” _laces up gloves_

Sean Hallenbeck: Few is a quantity, less is a descriptor of a quantity. I have a few items in my cart. Well, I have less than you. I think.

Matt Blum: “Fewer” is used when referring to something that has discrete units.

Matt Blum:”Less” is used when referring to something that doesn’t.

Matt Blum: I have fewer items than you. My car uses less fuel than yours.

Randy Slavey: I had this discussion with my son. “So milk would be less,” he asked. “Yes, you have less milk in your bowl. Until you start to measure it in discrete units. Then you would have fewer gallons of milk than I do.”

Matt Blum: I think the problem stems from that, if you were to substitute “fewer” where you should use “less,” it would be incredibly obvious, but it’s less so the other way around for some reason.

Matt Blum: Nobody would say “You have fewer milk in your bowl.”

Jamie Greene: That’s how I taught it to my daughter: can you count it? use fewer/many. is it not countable? use less/much.

Jamie Greene: You can’t count milk. But you CAN count bowls or bottles of milk.

Randy Slave: That’s tough for kids sometimes, though, @jamiegreene , because I can count cocoa puffs in my bowl. However, when I talk about them collectively (using the world “cereal”), I should still use “less”. I have less cereal / I have fewer Cocoa Puffs.

Sean Hallenbeck: I suppose it depends on the motivation. Do you mean Cocoa Puffs (the brand) as a collective. or Cocoa Puffs ( the item) and in I have 10 Cocoa Puffs vs. I have a bowl of Cocoa Puffs.

Jamie Greene: I agree. But capitalized Cocoa Puffs is the same as “cereal.” Lowercase puffs can be counted. It’s a silly discrepancy, but there is a difference.

Randy Slavey: But would you say “How much Cocoa Puffs is in the bowl?”

Jamie Greene: No, of course not.

Sean Hallenbeck: How many Cocoa Puffs are in the bowl?

Randy Slavey: You would say, “How much cereal is in the bowl.” @jamiegreene: Then we have nothing more to say to each other. :simple_smile:

Jamie Greene: Lucky Charms. Love ’em – same problem. This is why elementary school language arts textbooks don’t teach grammar with cereal brand names as examples….or sports teams. Why “The Jordan era Bulls is the greatest NBA team ever.” is not correct in American English is beyond me.

Sean Hallenbeck: Ok, new thread: How do you eat Lucky Charms? Ceral first and then spoonfuls of the marshmallows, or the other way around, or a bit of both in each spoonful? I eat the cereal first and then go for the good stuff.

Typolad: I can’t eat Lucky Charms because there are marshmallows. There’s only ever been one Kosher Marshmallow cereal, and it was THE WORST thing I have eaten.

Sean Hallenbeck: Kosher Marshmallow. I can die now..I’ve seen everything!

Typolad: The Kosher ones? Naw. They’re either made from fish gelatin or, more commonly, a plant bi-product. Same as Vegan Marshmallows.

Typolad: @seanhallenbeck: Well, if you’d move closer to the window so i could line up the shot, that would help.

Typolad: No idea what’s in Lucky Charms Marshmallows, but almost certainly not Kosher.

Sean Hallenbeck: Hang on, I happen to have a box of LC in my cupboard.

5 thoughts on “Grammar Wars: The Battle for Less/Fewer”