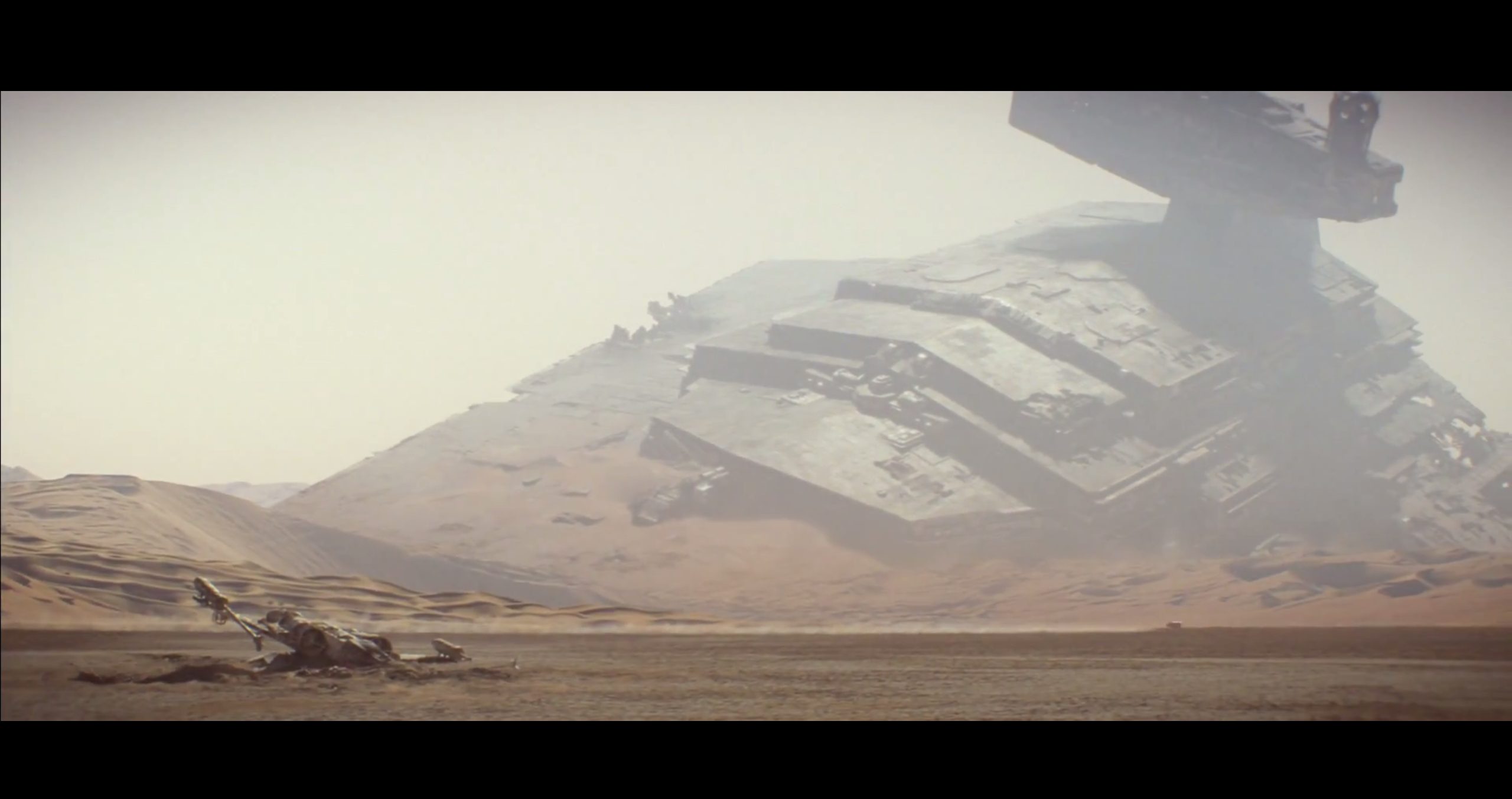 When the first 90-second teaser for Star Wars: The Force Awakens released in November of last year, I just had to write a speculation-heavy, shot-by-shot dissection for GeekDad. Well, with yesterday’s release of the second, and dare I say even better, teaser trailer at Star Wars Celebration in Anaheim, I had to do it again. Please agree or disagree with me, and add your own theories in the comments below.

I added this image to my breakdown for the simple fact that, for me at least, the appearance of this logo always has the magical ability to get my blood pumping. Am I alone?

A familiar, slightly varied arrangement of John Williams’s “Tales of a Jedi Knight/Learn About the Force” track from the New Hope soundtrack begins.

This first shot is stunning. A landspeeder, likely Rey’s (Daisy Ridley) speeder that we first saw in the original teaser, flies over a desert planet past a crashed X-Wing and the towering façade of a crashed Star Destroyer. This setting is either an old ship scrapyard or just the unfortunate target of battle-worn space debris. It has been confirmed that this desert planet is NOT Tatooine, but rather Jakku, a new addition to the Star Wars star chart. I’m in love with the post-apocalyptic look of this planet.

The shot fades to black and, for the first time in 32 years, we hear the voice of Luke Skywalker.

“The Force is strong in my family.”

Vader’s slightly melted helmet, looking like a disfigured skull, is ominously raised into view. But by whom? Does Luke keep his father’s helmet as some kind of creepy keepsake he hangs over his mantel? My guess is that this is more likely the villain Kylo Ren or perhaps some other, yet-to-be-shared villain or character who may themselves be a Skywalker descendant.

Over this sure-to-become-iconic image we hear Vader’s faint and familiar inhale and exhale as Luke’s voiceover continues.

Luke shares a campfire moment with R2-D2. The black cloaked Luke is looking mighty mysterious. Why am I certain that this is Luke? That mechanical right hand he places on R2 is a dead giveaway. Not to mention, his voiceover continues during this shot to add…

This shot is one that really has me putting on my speculation cap. Some time ago, back when the new film was initially announced, a rumor was swirling about a plot detail revolving around an uncovered lightsaber as the film’s MacGuffin. That lightsaber, it was rumored, would be Luke’s original lightsaber, the one that once belonged to Anakin and was handed down to Luke by Obi-Wan in a A New Hope. This shot has one woman, perhaps Rey, passing that very lightsaber over to another woman, perhaps Leia. The Leia assumption comes from the next line in Luke’s voiceover…

And then, in blackness…

“You have that power too.”

This one line is the biggest mystery of the whole teaser, bringing to mind so many questions that I can’t wait to have answered come December.

Who is Luke speaking to? Is this some other, yet-to-be-introduced character, perhaps Domhnall Gleeson or Adam Driver’s still unverified roles? Is he speaking with Rey? Is the mystery character on the other side of this talk one of Leia and Han’s children? I’m willing to bet that at least one of either Daisy Ridley’s, Domhnall Gleeson’s, Oscar Isaac’s, or Adam Driver’s characters are indeed one of Leia and Han’s children.

Like the first teaser, we get a glimpse of a squadron of X-Wings flying over the water followed by a shot of X-Wing pilot Poe Dameron (Oscar Isaac). It’s now been confirmed that this group is part of The Resistance, a new Rebel Alliance fighting off remnants of the Empire.

A very quick cross-saber strike, proving wrong all of the naysayers who criticized this new weapon design as theoretically nonfunctional.

Rey and Finn (John Boyega) outrun a TIE Fighter strike alongside the awesome new droid, BB-8. Like many of the shots from the teaser, this appears to take place on Jakku, which is looking more and more like a scrapyard each time we see it. Notice that TIE Fighter in the upper left of this shot? Piecing this together with other shots from this and the original teaser, it looks like many of these shots may come from the same series of scenes, during which Finn, a Stormtrooper, lands, crashes, or escapes to Jakku, defecting from his squadron only to be saved by Rey. Again, this is 100% speculation on my part, but as an editor and screenwriter, my critical eye sees a number of connections between at least five or six of these shots.

On a side-note, how awesome was it to see BB-8 roll onto the stage during yesterday’s Star Wars Celebration event in all of his practical, functional glory. What a feat of special effects engineering!

Here’s a really great shot of Kylo Ren’s mask as he looks like he’s readying some sort of Force attack. Notice the group of Stormtroopers holding the line behind him, in what appears to be some sort of village being burned in the background.

Like a scene out of Triumph of the Will, we get our first glimpse of the new emblem of The First Order. The First Order appear to be remnants of the Empire, and don’t seem to be straying too far from the Empire’s look. The new, improved Stormtrooper uniforms are slick, and very similar to the originals. But who is that at center stage in the background? And what is this snowy landscape? Hoth?

A nice closeup of Rey looking very much like Padmé, who may very well be her grandmother.

This is one of those shots I feel is a part of that sequence with Finn and Rey. In my own construction of these events, which, I’ll admit, could very well have nothing to do with one another, this is the moment where Finn steals a TIE Fighter, firing on his fellow Stormtroopers during his escape.

Here, I imagine Finn has just crash landed his stolen TIE Fighter on Jakku. The look of fear on Boyega’s face screams with urgency, matching up perfectly to that first shot of him from the original teaser last November. Take note of what appears to be a bloody handprint on his helmet. We haven’t seen that level of rawness in any of the previous films.

A quick shot of a seemingly new Destroyer class ship with a few smaller ships on approach.

Here’s another compelling shot, of what has been unofficially dubbed a Chrometrooper. There have been loads of theories on who this character may be, some calling him or her Captain Phasma. To me, the swagger of this character so matches that of Brienne from Game of Thrones that this must be the mystery character played by Gwendoline Christie, the actress who plays Brienne on GOT. Check out that cape. That gun. That armor. Whoever this is, I’m getting an awesome Boba Fett, bounty hunter vibe.

A quick shot of BB-8 doing his best impression of Leia’s corner peek from A New Hope.

This is another great shot, and likely part of my predicted string of event shots featuring Finn and Rey. What’s most striking here is that Rey is being positioned as the film’s probable lead and hero.

Here’s why this is great. During yesterday’s event, Lucasfilm president Kathleen Kennedy was asked which original Star Wars character she would most like to be. She answered with the following.

“I don’t have many choices. But that’s going to change.”

As the father of two young daughters, I’m excited for this new generation of Star Wars films featuring more than one strong female character.

A great piece of action with a TIE Fighter chasing the Millennium Falcon into the rear of what appears to be an old Super Star Destroyer. I’d guess this is another shot on Jakku. Who is piloting the Falcon? Could it be Finn and Rey, continuing on in their chase? Maybe Rey is retrieving the Falcon from this Jakku ship graveyard to bring back to her father Han. Ok, I have no basis for that thought, but you have to admit it sounds plausible.

Cool look at the new TIE Fighter uniform. I’m loving the red streaks on the helmet.

Finally, the shot we’ve all been waiting for. This shot made me and a legion of geeks across the globe go teary-eyed. Han Solo and Chewie return, standing in the Falcon, saying exactly what all of us Star Wars fans were feeling throughout this entire two-minute teaser: