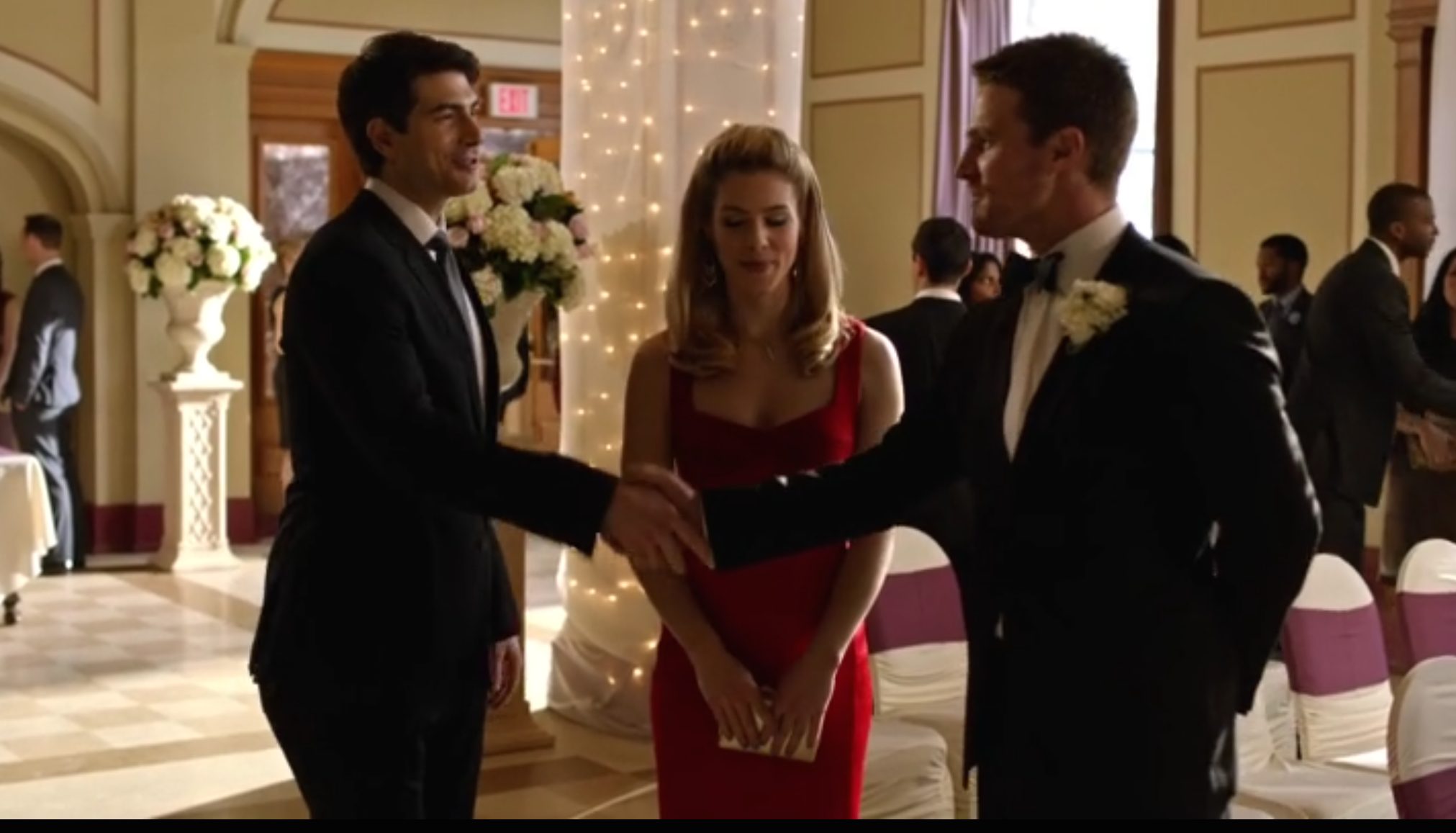 Corrina: Welcome to Arrow, where the main point of this episode seems to be that you can’t do anything heroic, even serve your country, if you have a family.

All you LEOs, soldiers, and sailors, get resigned to a life without spouse or kids. Oliver Queen says you can’t have them and do stuff to save the world. You, Peggy Carter, stop having friends! Saving the world is lonely, okay, so make sure Angie and Jarvis are gone next season, okay?

Or, I guess you could listen to Felicity and Ray, who think it is possible. Perhaps they’ve been reading old Fantastic Four comics.

Can you tell how much I’m loathing the character of Oliver Queen lately? Except I think I’m supposed to feel bad for him. Oliver’s saving grace: shirtless workout! You can’t tell me that’s a coincidence that he did it right in front of Felicity.

Rick, the minister, can’t make it. Oh please let that be Rick Flagg Jr. Convenient that Ray is a minister, eh?

Corrina: Either that or an Easter Egg they just tossed in, like the Meltzer power plant later in the episode.

Mordechai: Does talking about catching a bouquet count as a Bechdell fail, or is this is the second episode to actually pass it?

Corrina: The mayor and Laurel talked. Cupid and Lyla talk. So it does. But then the mayor dies. Gotta watch out for that Bechdel Test. It’s a killer.

Mordechai: A buck says Captain Lance will be the next Mayor.

Corrina: A buck say Captain Lance will be six feet under at the end of the season and die before reconciling with Laurel.

Mordechai: Um, who has Diggle and Lyla’s kid while they go on a honeymoon? Not that it matters because hey, look who’s in the limo:

The idea that Lyla has to take the Squad on a mission points out one of the more glaring plot holes of this entire show–A.R.G.U.S. is supposed to be this huge, massive agency, but they keep relying on, like, three people. An untrained Oliver in the flashbacks, and now roping in Lyla when they have a building full of agents.

Corrina: Not to mention they don’t care about security, given they keep including non-A.R.G.U.S. member Diggle in their missions. I might play “get the no-prize” by saying Lyla, Diggle, and Lawton were included because whoever sent them knew this mission was FUBAR and wanted them killed.

Cupid is annoying, but her smalltalk with Lyla was kind of gold. It felt like they had her instead of Harley Quinn.

Corrina: I hate Cupid. She’s the one-note crazy girl but, hey, she’s also hot. What’s a guy to do? This girl hates the whole concept.

Mordechai: Nice change of pace, having the Flashbacks be about Lawton. I admit, I was terrified for a second that Arrow‘s version would be close to the original Ostrander mini-series (really, really bad things happen to his son). But, as he has a daughter named Zoe instead, it appears they’re basing it more on the Christos Gage miniseries.

Corrina: I couldn’t stand Oliver this episode, as usual lately. But Lawton’s story captured me. He knows he’s never going to be redeemed so he does the next best thing and tries to make sure someone else has a second chance. He kinda broke my heart.

Mordechai: Why the HECK is Ray speaking in this Press conference? And what “evidence of his apparent guilt?” Wow.

Corrina: Oh, please, this is a city that has a murder trial over in one day, tells the police force not to police an entire area of the city, and elected Brother Blood as mayor. The press conference line-up is the least of the stupid writing of city officials.

Mordechai: Right–hey, let me find something nice to say. Um…Arrow vs. fake Arrows is a great fight scene. I kept trying to get an image, but it moved too fast. You know what doesn’t move too fast? Ray in that rocket suit. What, was he in traffic? Not that it matters because now he knows the worst kept secret in Starling City.

Corrina: Query: if Ollie knows where the fake Arrows will show up, why doesn’t he alert the police himself so they can show up and witness it? Or tape the fight with the fake Arrows?

And Ray? He is henceforth know as Iron Ray.

“He hasn’t killed anyone in nearly two years.”
“That really is not your best argument.”

Thank you! Ray is finally saying what we should all be saying. Oliver may not be a killer right now, but he is a murderer. Not that Ray is being any way rational in his response, but, hey, he’s hurt.

Corrina: He’s being rational to some extent, given that all he knows is that his city is full of violent vigilantes. No wonder he wants to be Iron Ray.

Mordechai: Speaking of irrational, I kind of loved the Felicity/Oliver blowup.

“When were you going to TELL me this?”
“I’ve been getting a lot of that today.”

Seriously, you have to love the two men who have been trusting Felicity with their secrets blowing up at her for keeping another guy’s secrets. Sorry, but that’s the whole point–she’s really, really good at keeping secrets, you guys.

Corrina: Run away with Iron Ray, Felicity, instead of sticking around with passive-aggressive Oliver. But, first, go hack Captain Cold’s file on Barry.

Mordechai: Back to Lawton’s origin of a second. Cliche much?

Corrina: They didn’t have much time to work with, so far as Lawton goes, so it’s somewhat forgivable. Love the actor. He was scary enough that I thought he might actually kill his wife.

Mordechai: Read the Ostrander mini. Spousal abuse is the one thing Floyd Lawton would never do. Seriously. I know it’s not the same character, really, but still. Just off to me.

Apparently, though, just like Starling City only has one police station, they also only have one Assistant D.A. I have to give props to the Laurel/Ray scene. Great interaction. Brandon Routh is so good that even Katie Cassidy does better when he’s around.

Corrina: Katie Cassidy has been doing progressively better when they put her with more naturally expressive actors to play off of. Oliver is repressed but both Nyssa and Ray are far more open and she’s able to react better. It also helps that she’s been getting something of her own story this year.

Iron Ray and Arrow have a big confrontation. It’s too short and I’m bummed Iron Ray was defeated so quickly. (Also, I think it’s just you.)

But poor Arsenal. He was taken out and tossed around and we don’t hear from him the rest of the episode. Maybe Thea helped nurse him, if she wasn’t too busy taking care of the mass murderer sleeping on her couch.

Mordechai: Oh hey, what did happen with that plot? Hnh.

Corrina: So because Arrow doesn’t kill him, Iron Ray believes him? I’m not sure I’m good with that. However, I love Ray’s idea of partnership, as does Felicity.

TEAM IRON RAY ALL THE WAY.

Mordechai: For realsy, every time they kiss I get a little tingle.

I think Ray basically decided to trust him because Felicity does. Which is still weaksauce, but sweet.

Oh, and the Suicide Squad b-plot ends with Lyla quitting A.R.G.U.S because Amanda Waller won’t let her expose the senator they tried to rescue (who turned out to be evil). It’s interesting seeing a professional spy suddenly get scruples. Also, Diggle was going to quit too, but no-no, what he does is more important.

You know, I really, really don’t set out to lecture on gender politics every damn time.

Corrina: But, wait, there’s more. Another city officials meeting. Fake Arrow kills the mayor. Now it’s Felicity’s turn as the target. Except the previews for next week say Ray’s in critical condition.

Ray, my friend, you need to keep that armor on at all times in Starling City.

Except, you know, when you’re doing the Salmon Ladder and consolidating the “partnership” with Felicity. I need those exceptions.