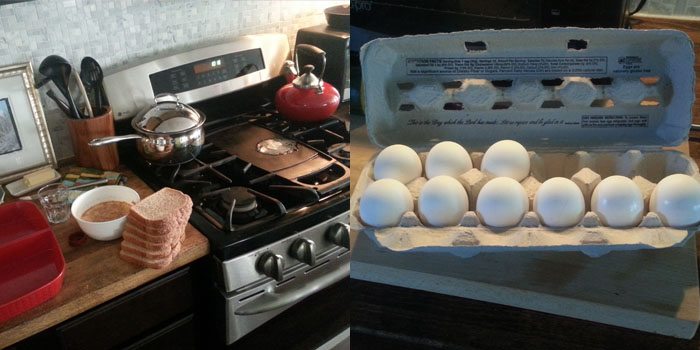 The previous puzzle, as previously posted:

This morning I continued our recent Sunday morning ritual: I made French Toast for myself and the kids. As I was getting the eggs out of the refrigerator, I quickly discovered that all of the eggs were at one end of the carton. Fortunately, all of the eggs were at the end I grabbed, so I just sort of whacked the bottom of shelf above instead of potentially dropping the whole carton of eggs. 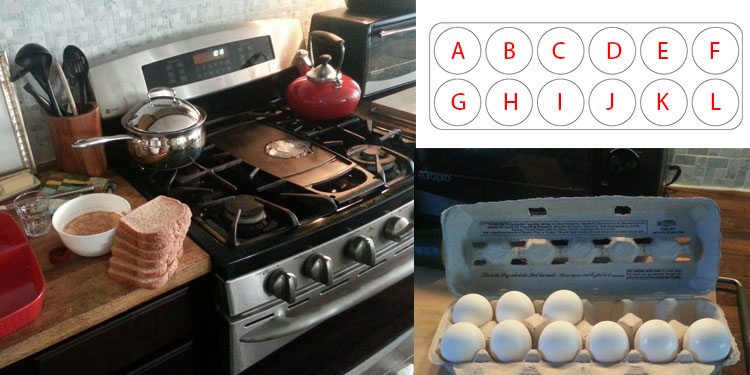 So I started thinking… is there a “right” or a “best” way to remove eggs sequentially from a carton, so as to minimize this drop-force, or at least maximize the surprise of an unbalanced carton over time?

For the purposes of this puzzle, let’s assume that the amount of balance-force or drop-force for an egg in a given “dimple” is proportional to the square of the distance from the center of the dimple to the center of the carton. Let’s also assume that the each dimple is a square, that there is no non-dimple space in the carton, and that any given egg has circular sections so that it puts all of its balance-force in the center of the square. Additionally, let’s assume that force in any direction (either left-to-right or top-to-bottom) is equally bad, and that the carton is replace with a random end leading into the fridge; that is, we can’t count on either end being the one I grab, so for the purposes of this puzzle, assume that I always grab the carton by its center. Finally, as we go through a lot of eggs early imbalances have the same “weight” as late imbalances throughout the carton-clearing sequence.

At no point can the eggs in the carton be reshuffled. For this puzzle, you are removing eggs only.

Just looking at a carton of eggs, you can easily identify several “balanced” solutions. Using the diagram above for labels, the carton “AGFL” would be balanced for 4 eggs, as would “CJ.” Of course, any such solution is just one step in the overall process of clearing a carton.

This week’s GeekDad Puzzle of the Week is to determine the “best” sequence for emptying a single carton of eggs, one egg at a time, so as to minimize the amount of balance-force throughout the process. Answers will most likely look like a string of letters (i.e., ABCGHIDEFJKL is one way to empty a carton, but most likely not the most balanced) with one instance each of each letter A through L.

It turns out that any “symmetric” solution that involved decartoning eggs in pairs that are on opposite sides of the carton at the same distance will minimize the amount of balance-force through the decartoning process. For example, A and L, I and D, and K and B are such pairs. Any solution that proposed decartoning balanced pairs was accepted as “correct,” and entered into our drawing.

To minimize the amount of “unbalance” as a fraction of the total weight of the carton, you would want to remove the most distant pairs first, as leaving them until later or last would have a higher proportion of “unbalance.” An example of this class of solution is ALFGBKEHCJDI.

Congratulations to Ashoak Niranch for being selected at random from among the correct solutions submitted! A $50 Gift Certificate from the amazing team at ThinkGeek will be on its way shortly.

Thanks to everyone that submitted a solution. Happy puzzling!

Daily LEGO: A Dutch Cafe on the Corner