The New Year typically brings thoughts of change and new beginnings. Sometimes people look forward to these things, but sometimes they approach them with hesitation, and when they do, some of them use one of today’s words when they actually mean the other. 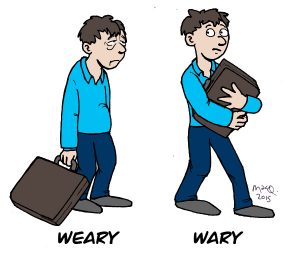 Wary: watchful; cautious; being on one’s guard against danger.

I think most of the trouble with these two words comes from a simple error; people assume that since wary sounds like wear, it must be spelled the same way. Of course, they overlook the fact that words ending in -ear can be pronounced either of two ways. Wear rhymes with bear and tear, while dear rhymes with ear, year, hear, near and tear. A simple way to get it straight is to remember that wary comes from the same root word as aware.

Wary comes from the 1550s, from Old English wær “prudent, aware, alert, wary,” which is similar to the Old Norse varr “attentive,” which goes back to an ancient Proto-Indo-European (the language spoken in what’s now Europe about 5,000 or so years ago) root word *wer- meaning “to cover.”

If you say you’re weary of get-rich-quick schemes, you’re saying they make you tired.

Today’s Word Nerd actually cropped up as a result of a discussion of how to pronounce my last name. My wife’s name is Terri, so a lot of people insist on trying to make it rhyme, pronouncing MacQuarrie as “Mac-wary.” Others just mangle it in a lot of other ways, coming up with “Mac-weary” or “Mac-worry” or a dozen other variations. It’s pronounced like quarry, where rocks come from, or like “Mac-war-ee.” But that’s clearly beside the point.