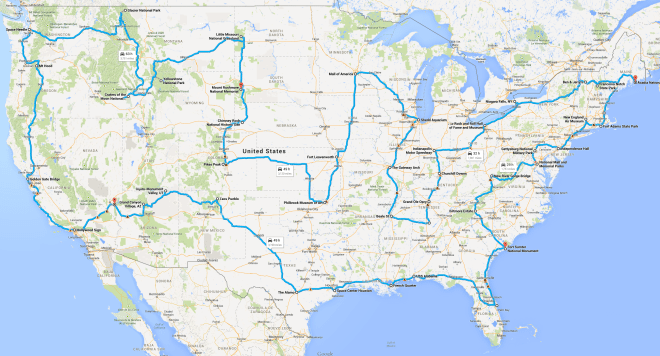 Periodically this year, I’ve seen the image above posted to Facebook purporting to be “how to drive across the USA hitting all the major landmarks.” Except it’s not very good at it. The image alone doesn’t even make much sense! What counts as “major landmarks”? Apparently there are none in Boston. It looks like a great trip, but I don’t think it qualifies as advertised.

What the image really shows is the route taken by Brian DeFrees across 32 states in 55 days, taking 200,000 photos and turning them into a video. It’s pretty cool—you should check it out. But the video and visiting friends were his main priorities, not “hitting all the major landmarks.”

So could you do that?

It’s going to be a longer trip.

Here’s a shot I took at creating such a path for you, assuming you have quite a bit of free time on your hands, as it’s going to take weeks. Brian’s trip took 55 days, and it skipped a lot of states. How long this would take you depends on how long you stayed in a given spot, of course, but you’re looking at 222 hours (more than 9 days) of driving time alone.

The biggest task here, of course (other than 222 hours of driving), is choosing what counts as a “major landmark.” It’s impossible to let somebody else make your dream road trip itinerary. That list of perfect landmarks is going to be different for everyone, depending on whether the car’s occupants love art or nature, lighthouses or lakes. For this list, I tried to create a balance that included:

– Traditionally “major” landmarks, like the Statue of Liberty or Golden Gate Bridge
– Nature stops, like Yellowstone National Park
– History stops, like Gettysburg National Military Park and The Alamo
– Science, like Cape Canaveral
– Arts, like the Philbrook Museum of Art and The Rock and Roll Hall of Fame and Museum
– What Trivial Pursuit would call “sports and leisure,” like the Indianapolis Motor Speedway and Churchill Downs

It’s a well-rounded road trip. You can use this map to see the list of places I chose. In larger cities like New York or San Francisco, rather than suggest every possible place you could visit, which would be lists of their own, I picked one highlight. Doesn’t mean the rest aren’t great.

The second goal was to visit every state, even if it wasn’t much more than a drive-through. On a road trip, the best stops are the ones you didn’t know you were going to find. Long, blue stretches on this map are just undiscovered adventures waiting to happen.

However, this is the part where I have to note that upon a final pass, I discovered I neglected Michigan. My utmost apologies to the land of people who are the masters of navigation by pointing to their hands. You don’t need this map. Just stretch out your arm and call it the country. You have the necessary experience to make it work. For the non-Michiganders who need to get that state into this trip, you can hit up Hitsville, USA, the home of Motown. I have never had a more enthusiastic tour guide. You won’t regret it.

If you’re ready to start planning your own drive, check out my two secrets to planning your best road trip adventure. And then get driving!

Now Hear This – The Soundhawk Is a Great Headset