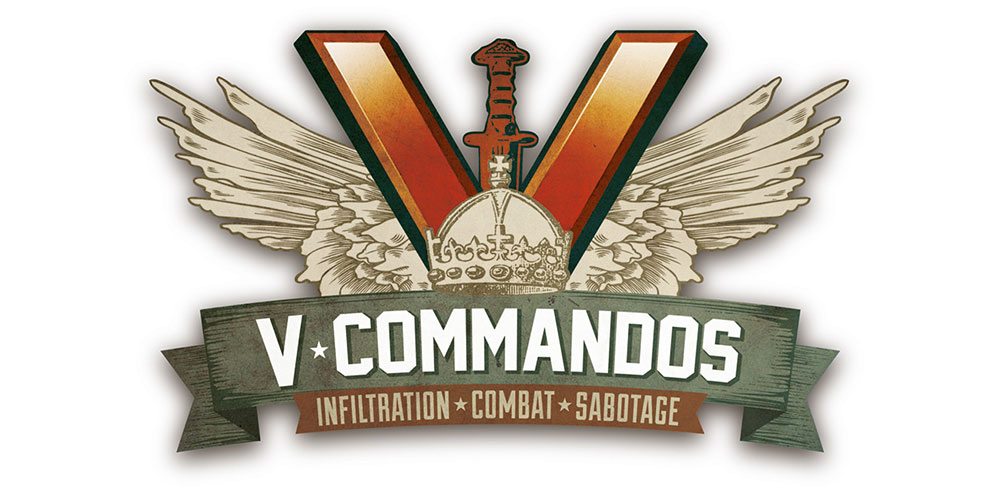 It is the second World War. You and your fellow commandos have been dropped behind enemy lines. You must work together to infiltrate the German base and perform a stealth mission without alerting any guards. Do you have what it takes?

V-Commandos is a cooperative tactical game for 1-4 players that presents players with a number of scenarios to complete. As a commando, your job is to slip behind enemy lines, pull off a mission and escape before the bad guys get you. Players have special abilities and equipment to help the team, but it’s not a run & gun game. Stealth plays an important role and you’ll have to be strategic, however that doesn’t mean there’s no enemy contact. There are a variety of ways to maintain cover and some of them mean getting blood on your hands. It’s like Solid Snake got together with Sam Fisher on a piece of cardboard.

Te game is recommended for players 13 and older and games take 30-120 minutes, depending on the scenario played.

I can’t comment on this because I played a very early prototype. Visit the project’s Kickstarter page and you’ll get a better idea of what all will be in the core box, but suffice to say that there lots and lots of cards and cardboard bits and the artwork on each and every piece is pretty wonderful. 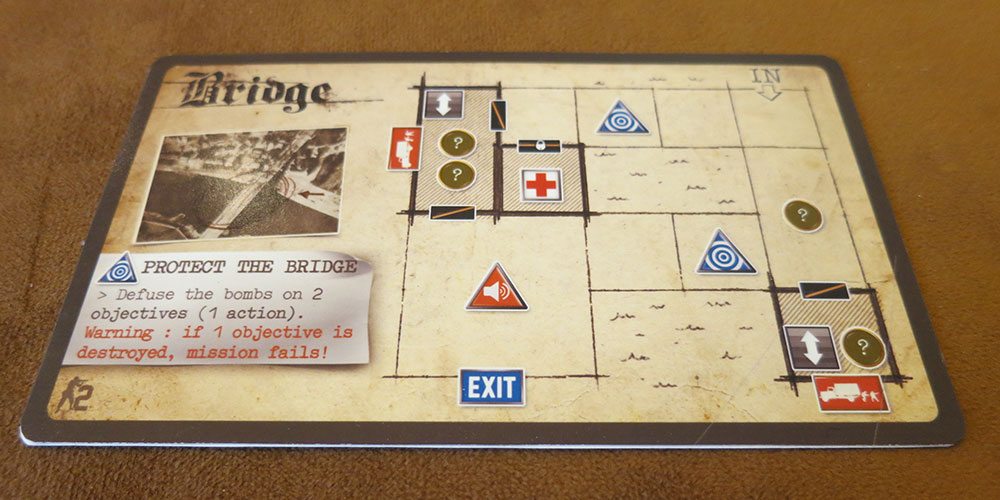 Play begins by selecting a mission. Missions may consist of one or more objectives. Each mission card will include a diagram showing what type of terrain tile use and how to layout the board for the mission. Game setup also includes placing tokens for alarms, enemies, entry and exit points, and other items. Players then select the character they want to play. Each character has a specialty skill(s) and supply tokens – things like weapons, munitions, and items to aid the mission — assigned to the character card.

Each turn follows the same four phases: First, the team draws an event card. These cards are ranked by difficulty and the intensity of challenge is determined by the objective. Event cards are only in effect for a single turn; a new event card is drawn each turn and the old one discarded. Some events have a cost associated with them, for instance, donating a supply token to the Resistance will reward the team with a sabotaged alarm. Some event cards benefit the commandos, like a fog descending on the playing field, but most cards work against your favor.

Next, the commandos take their turns. Each commando gets three actions and any single action can be repeated three times, if desired. Actions amount to move, hide, combat, collect or use supplies, or bank an action for a future turn. Commandos can also build a trap to trick an enemy or trade supplies with each other. 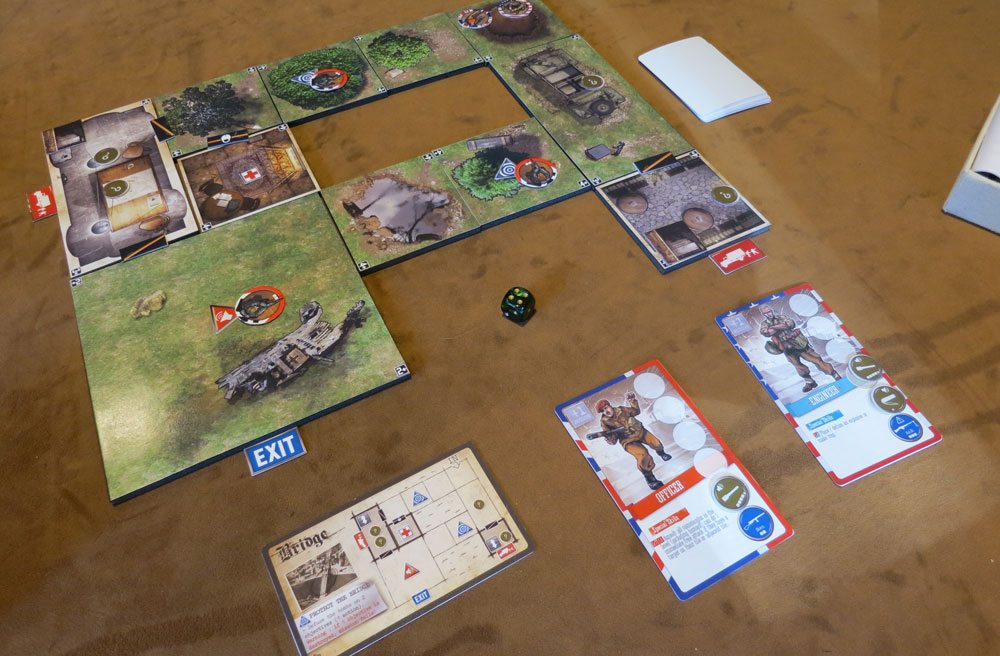 For combat, a commando may shoot any enemy on the same or adjoining tile, as long as there is not a wall or locked door blocking the way. To check for a hit, a D6 is rolled and the roll must meet or exceed the number on the target’s terrain tile. Commandos may also use a stealth attack if he is not visible and on the same tile as the enemy. Stealth attacks always have 100% success!

Now, it’s the enemy’s turn. Unfortunately, the first thing that enemies do is reinforce, so now there are more bad guys to avoid. A token is drawn to determine the number of enemies entering the game. The token has two numbers on it, one if there is an alarm, another if it is still silent. Tokens also denote what weapon the German will be carrying. Enemies enter the game from a predetermined entry point.

Enemies then move toward a destination shown at the bottom of the event card … unless a commando has been sighted, in which case, all bad guys converge on him. If an enemy enters a tile with a stealthy commando on it, each hidden player must roll a stealth check to maintain stealthiness. If an enemy sees a commando, he will shoot using the same rules for shooting as for the commandos, mentioned above.

During the fourth phase of play, it is determined if the mission has been completed. If not, play returns to phase one. In order to complete the mission, all of the objectives must be completed and all of the commandos must have exited the board via the exit point to succeed. There are a number of finer points to these rules, but that’s the game in a nutshell. 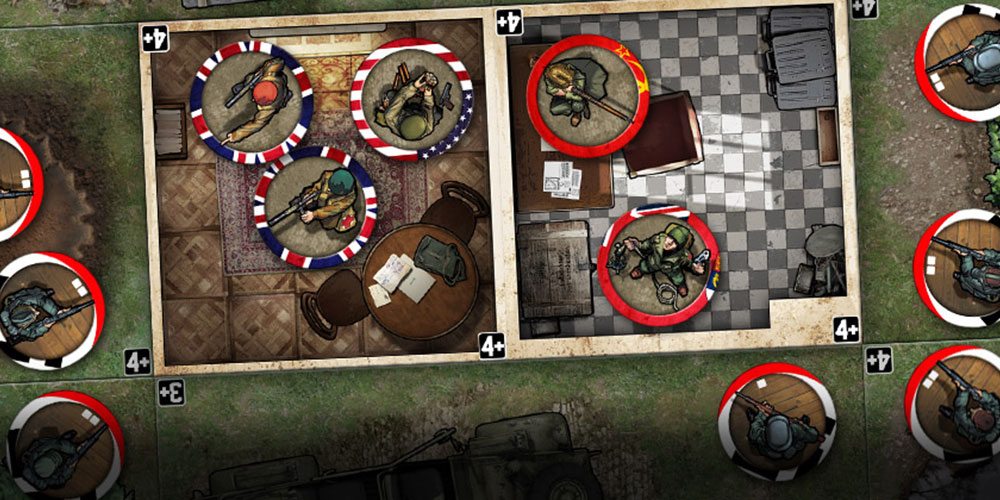 I really enjoyed playing this game and V-Commandos really creates all of the suspense and high intensity you’d expect from a game where you are venturing deep into enemy territory with no one to help you but your team. In one game, we felt a real sense of peril as a German guard wandered onto our tile, where we thought we were hidden. Luckily our rolls kept us in the shadows and we passed on unnoticed.

While I haven’t seen the finished components, I love the art that is being used on the tokens, terrain tiles, and cards. It’s a great combination of comic illustration and realism. Not only that, the game will include about 40 tiles, over 200 tokens, more than 30 event cards, and 25 objectives. And that doesn’t even include the expansions. That’s a lot of stuff, given how little is in some of the other game boxes I’ve opened lately. I think the game will have an awful lot of replayability because objective cards can be interchanged in a staggering large number of ways and each character has a second side for a variation in character ability.

There are a lot of war-themed games out there, many that are quite similar, not a lot that set themselves apart. But with a unique and fun stealth game mechanic, loads of enemies, challenging objectives, and seemingly endless replayability, V-Commandos is a game worth supporting.

For more information, check out the V-Commandos Kickstarter page.

A HERO Will Rise