Back in August, I had a fun time sitting down and going through the new 5th edition D&D Player’s Handbook and creating a new character for the Encounters hosted events that happen every Wednesday evening. Unlike the AD&D rules that I was most familiar with, my return to D&D came with some nice changes regarding leveling and Ability Score bonuses and more. With AD&D, every class had its own Experience Point chart — leveling for a fighter required less XP than leveling for a magic-user, for example. The new 5e Player’s Handbook not only strips out the complexities (instead offering a single XP chart for leaving of all classes, for example) that I recall with AD&D, but adds a lot of new (to me) interesting twists such as Feats and class-specific choices that offer even more customization and fun ways to play a character.

My return to playing D&D started with my developing a character named Niloshis Quietwalker. He’s a half-elf sorcerer with a hermit background. For Ability Scores, I elected to use the 27-Point Score Buying System that allows a player to “buy” attribute scores. (If you’ve got a Player’s Handbook, this is all found on page 13.) Without race-based modifiers yet added, I distributed my scores as follows:

Why this distribution? A sorcerer’s two major Saving Throws are Constitution and Charisma. It’s also important to remember that your Hit Points are calculated by rolling a die and adding your Constitution modifier. Spellcasters are traditionally low on HP, so anything I can do to help my Sorcerer stay alive should be paramount. Applying the highest score of 15 to my Constitution and the 14 to Charisma is a good start as that will ensure high modifiers associated with those two scores.

Half-elves get Ability Score bonuses that include Charisma +2 and +1 for two additional Ability Scores. Bumping Charisma up to 16 (with the +2) and applying the two +1s to Constitution and Wisdom is how I chose to roll… meaning I now had the following scores (and modifiers):

Why didn’t I increase my Dexterity that would help out with my Armor Class? I could have done that, but with the sorcerer class, one of the choices I can make at level 1 is a Sorcerous Origin. I chose the Draconic Bloodline (Brass) for many reasons, but a key one was the base AC — 13 + Dexterity modifier. Meaning I have a starting AC (with no armor) of 15. Not bad for a spellflinger. The Draconic Bloodline also provides an additional +1HP at level 1 and +1 for every level attained afterwards. Yeah! At level 1, this means my sorcerer started with the following:

You can read more details about the initial development of this character in my original post, including my initial purchases of equipment and the background details such as Ideals, Flaws, etc. But now it’s time for some upgrades! Throughout my time with Encounters (six sessions under my belt) and one Expeditions event (a handful of one-hour mini-missions), my sorcerer managed to inch up in XP to level 2 and then level 3. Unfortunately, while involved in Encounters, I was not really able to take advantages of the level ups because a Long Rest was necessary to restore spell slots, regain HP, etc. As of last Wednesday, however, my sorcerer got his long awaited rest. Now, it’s time to take him up to level 2 and then 3.

Level 1 provided my sorcerer with four cantrips and two spells. For cantrips, I selected Firebolt (1d10DMG), Ray of Frost (1d8DMG), Poison Spray (1d12DMG), and Chill Touch (1d8DMG). Yeah, heavy on damage spells. For the two spells, I selected False Life that provides 1d4+4HP to self or other character for an hour. I also selected Shield, a pretty standard defense spell that adds +5AC and can be fired off as a reaction spell against projectiles and other attacks on self or other player. Its duration is only to the start of next turn, but a +5 on your AC on a particularly nasty attack can save the day. 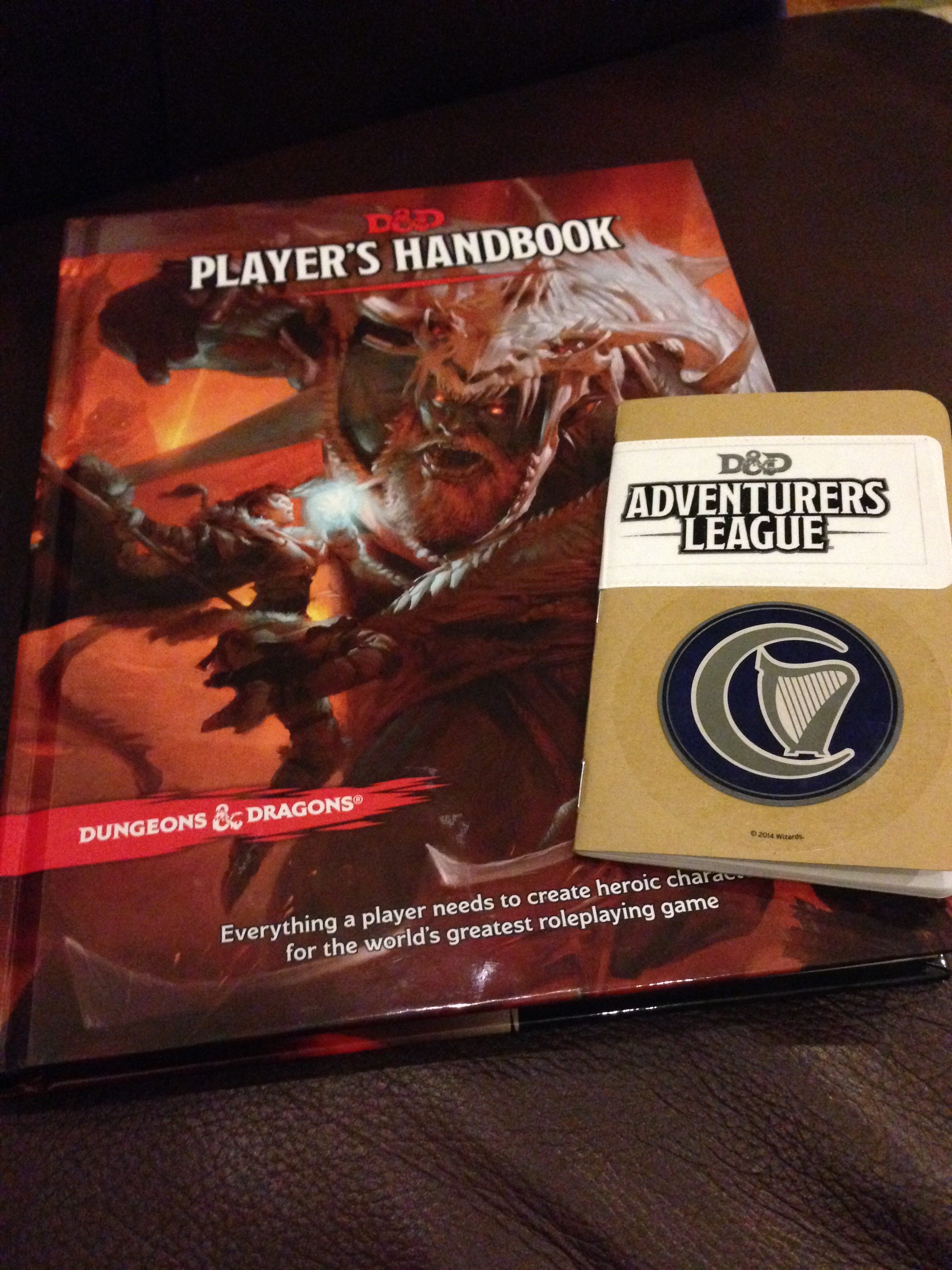 Level 2 was reached by hitting 300XP. The only changes to Niloshis were one additional spell (no additional cantrips), two Sorcery Points, and additional Hit Points. For the third spell I selected Sleep — it’s interesting in that you roll 5d8 and select a point for the center of the attack. Any creature within 20 feet radius of that point risks falling asleep, starting with the lowest HP creature first. You subtract the lowest HP creature’s HP from the 5d8 total and then move up the line. With an average of 22.5HP total, the Sleep spell can easily take out 3-4 low HP creatures. Level 2 provides me with three Level 1 Spell Slots, and this Sorcerer-specific thing called Sorcery Points allows me to buy additional spell slots or “cash in” a spell slot for points. Later these points can be used to buff spells with additional power, so I’m looking forward to gaining more Sorcery Points if Niloshis can survive to some higher levels.

For HP, I take the base 4 (versus rolling), add my Constitution bonus of 3, and get the +1HP for my Draconic Bloodline. This bumps my HP up to 18. Yeah… a level 2 sorcerer with 18HP Max. Cool.

But reaching Level 3 at 900XP! Oh, yeah… hard to believe a single level jump beyond level 2 could be so important, but it really takes Niloshis up a notch. With level 3, I gain two level 2 spell slots and one additional level 1 spell slot, but only increase my Known Spells to 4. This is tough, because I’ve identified two level 2 spells I really REALLY want… but I can only pick one. Or maybe not. More on this in a moment. Level 3 also offers me the Metamagic feature, which allows a sorcerer to “twist” spells in interesting ways — I get two choices out of eight options, and I’m selecting Distant Spell that allows me to increase the range of my spells and cantrips in exchange for Sorcery Points. (My Sorcery Points increased to 3, btw.) I also selected Twinned Spell that allows me to target a second creature with the same fired spell using Sorcery Points.

For the Adventurers League, players are allowed to fine tune their characters up to level 4, and make certain changes such as the selection of spells. I’m going to take advantage of that and change up my spell selection by dropping the Shield spell. In its place I’m going to grab two level two spells — Invisibility and Mirror Image. Both can be used defensively, but the Invisibility spell may offer Niloshis or a colleague a chance for some real sneakiness as the adventure moves forward. The Mirror Image will create three duplicates of Niloshis that have a high probability of absorbing attacks from enemies.

With four level 1 spell slots and two level 2 spell slots, Niloshis will finally get a few more spell casting opportunities before exhausting those slots. Level 1 offered two slots versus level 3’s six slots. I can even choose to cast the level 1 False Life and Sleep spells with a level 2 slot and increase the benefits of those spells. Cantrips, of course, can be used over and over again.

AC remains the same, but the Hit Points increases again. With 18HP for level 2, I now get to add the base 4 + 3 (Constitution modifier) +1 (Draconic Bloodline) for 26HP Max! WOO HOO!

MY XP is currently sitting at 1077. Level 4 won’t come around until I hit 2700XP — plenty of adventures ahead of me before I reach that level. And that’s a good thing — characters are currently capped at Level 4 for Adventurers League, and no additional XP can be earned once level 4 is reached until the next stage of AL kicks off.

During my adventures, I’ve managed to gather 194 gold pieces and a Potion of Climbing. The gold will come in handy when the adventure ends and I have to pay for “living expenses” during downtime.

I’ve been having a blast playing Niloshis for Adventurers League. I must admit, though, that I’m anxious to start DMing again. I’ve had so few opportunities to play D&D, so until the Dungeon Master’s Guide is released, I’m going to continue to play Niloshis and maybe even create a new character. This Wednesday starts Chapter 2 in the Hoard of the Dragon Queen adventure, so I’ll be submitting my report later this week after that night’s adventure is complete… I’m hoping to report some fun and interesting actions with my new spells, the Sorcery Points, and the Metamagic spell twists. Stay tuned…