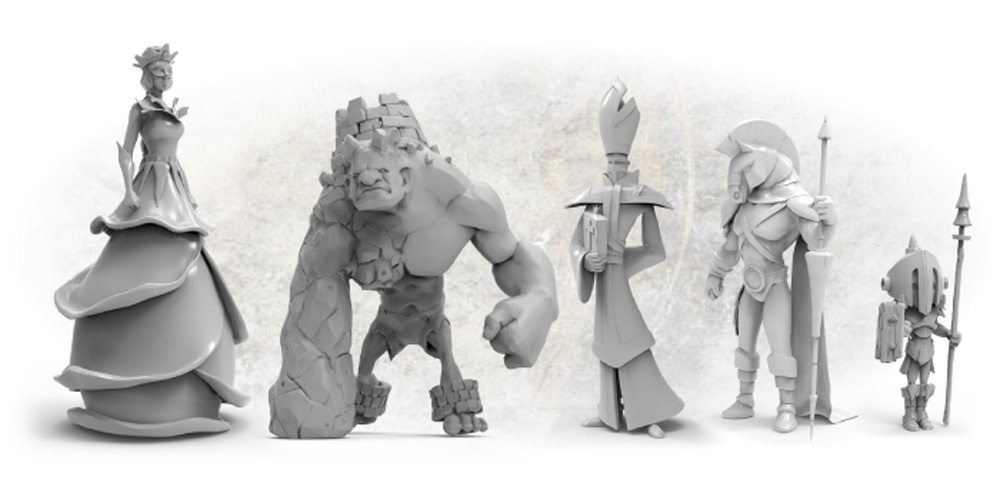 Last weekend I talked about a few variants on chess that play around with the basic rules of chess. King Down is a new game, just launched on Kickstarter, which takes a slightly different approach: it’s billing itself as a prequel to chess. Although there are some familiar pieces with familiar moves, King Down is really its own game with new objectives and a very different feel. And it doesn’t hurt that it looks spectacular.

At a glance: King Down is for 2 to 4 players, ages 8 and up, and takes 30-60 minutes to play. The pledge for a copy is $65 for the full version, or $18 if you just want the cards and rules so you can play with your own chess set. It is a chess-like game but with some added rules, so I’d say probably about 8 and up would be about right, though younger kids already familiar with chess may have an easier time picking it up as well. The game length may vary greatly, as with chess.

Note that the components list includes Keepers of the King, which appears to be a small expansion that might be sold separately after the campaign but is bundled in the Kickstarter rewards.

If you pledge at the “Bend the Knee” tier, you’ll get just the 100 cards and rules, but no custom board or miniatures, so you can use your own chess sets and boards.

The board itself is based on a standard chess board, but there are some areas that are marked differently: the center four squares are the capitol, and the center 6 squares on each edge are the frontline, where pieces are spawned can are immune to capture. The board that comes with the game will have these areas marked out, plus the four sides of the board have artwork that ties in thematically with the four different armies.

Currently I’ve only seen the 3D renders of the miniatures on the Kickstarter page, so I can’t comment on how they will turn out in the final product, but the designs look fantastic. Even though you could play with regular chess pieces, why would you?

There are some pieces that correspond to regular chess pieces and move in the same way:

But there are also five new pieces that move and take in different ways:

The Archer can take from a distance without moving. The Paladin can move well but is sacrificed when he takes a piece. The Guard cannot take and cannot be taken. The Beast can only move when taking. And the Maester remains a bit of a mystery as of yet…

I’ve played with a demo set of the cards for two of the armies. The backs of the decks are color-coded so it’s easy to tell them apart. The armies have some subtle differences (among them, the kings have different actions on them), and there are also some army-specific cards that give a powerful bonus for a single turn during the game.

The artwork throughout is really well done; King Down is a polished, impressive-looking game.

You can download a copy of the beta rulebook and print and play here. And if you have a 3D printer, you could even get files to print out your own miniatures for a few of the pieces. The game is still undergoing some fine tuning, so the rules may be subject to tweaking.

Unlike standard chess, the goal of King Down isn’t to checkmate the opposing king, but to reach 8 victory points. You do get points for captured pieces, but you also get points for having pieces in the capitol, the center four squares of the board. And it’s important to note that captured pieces may not stay captured forever.

Each player starts with the following pieces in their base camp:

Each player gets a deck of cards corresponding to their army. These are shuffled and placed nearby, and everyone draws a starting hand (3 for starting player, 4 for the rest).

On your turn, you have 4 actions to spend, which you can use on the following actions:

You may also spend action points to play cards from your hand; each card is marked with the number of actions it requires to use it. Cards are played face-up on the table and remain in play until the beginning of your next turn, when they return to your hand.

Calling cards show the various pieces from your army. They can either be used to summon new pieces to the board (usually at a cost less than 4 actions) or they can give particular abilities and benefits to a piece that is already on the board. A piece cannot take or move on the turn that it was summoned.

Spell cards are specific actions and may be played onto a calling card that is already in play. Some spells give you extra moves or takes with the affected piece; others may protect you from being taken, or even return pieces from your opponent’s prison to your camp.

Cards are reshuffled when the deck runs out.

The game ends when a player reaches 8 victory points:

First off, King Down looks fantastic. Designer Saar Shai is working with Rafi Ben Aharon and Nadav Shlomo Giladi of Dream Catcher—most of their experience is in animation, movies, TV, and so on rather than board games, but their designs for the miniatures look amazing. I just hope the final products turn out as nice as the 3D renders shown.

Gameplay is pretty fun, and has some of the flavor of chess while still feeling like its own game. The movements of the basic pieces are all familiar, but because of the victory points, you have different goals. For one, you really want to get pieces out into the capitol—not only for the points, but because it means you can have more cards in play or in your hand. Of course, putting your pieces in the middle of the board makes them much more vulnerable to capture.

The other thing is that since the game doesn’t necessarily end if your king is captured, the game has a different flow to it. Your king is still the most valuable piece, whether it’s captured or enters the capitol, but it’s not the most crucial. So you can actually have a situation where it’s worth sacrificing your king in order to secure even more points through another path.

Because of the cards, King Down is not a game of perfect information; you may have some hidden information that your opponent doesn’t know about. However, because of card limits, unless you discard your current cards to draw new ones at the end of your turn, your opponent will have some idea of which cards you picked up and put back into your hand. If you keep using the same card over and over because you really like it, then your opponent can take that strategy into account.

King Down turns chess into something like a simple miniatures game: you spawn pieces and use other cards to boost their basic abilities, but with limits. It’s not a crazy anything-can-happen game, but still uses some of the tactics and ideas of chess. Because you start with fewer pieces than a full chess set (at least before you add in the Keepers of the King), it also feels more like the mid- or end-game of chess, once you’ve gotten beyond the opening. You’ve got fewer pieces on the board and you have to make do with them. The big difference, of course, is that you have the ability to bring in more pieces.

Whether you like chess or not, King Down is worth checking out. While it’s not for everyone, I think many people may be drawn in by the outstanding design first, and then by the gameplay. And, as it’s a prequel to chess, it might be a good way to hook your kids and then continue on to the game of kings.

For more information, visit the King Down Kickstarter page.

Disclosure: GeekDad received a beta version of the cards for review.