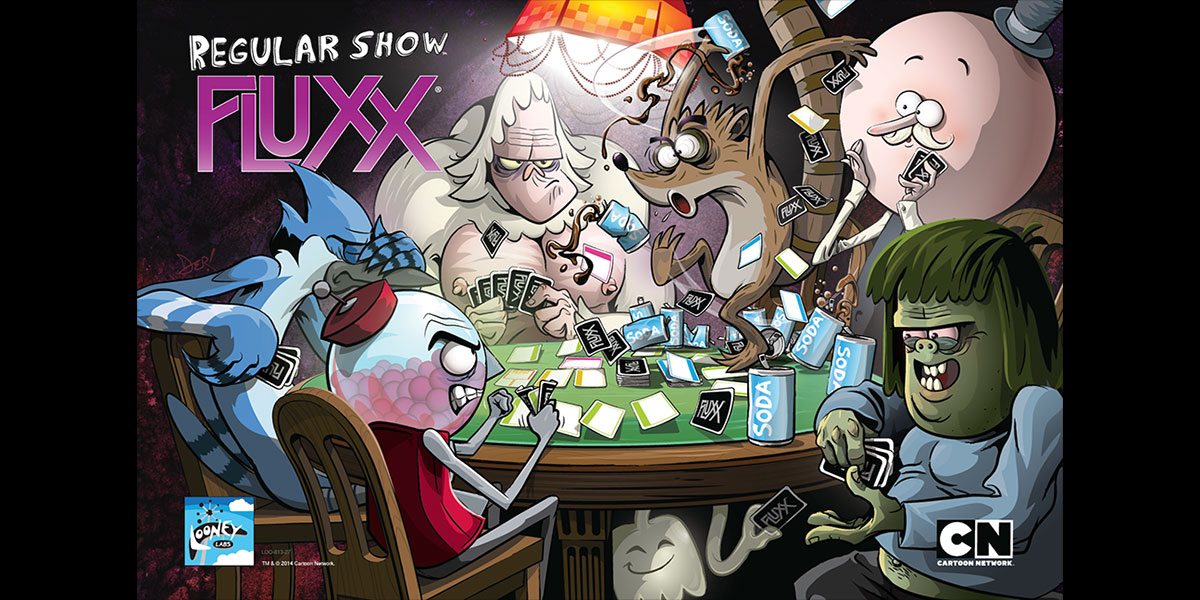 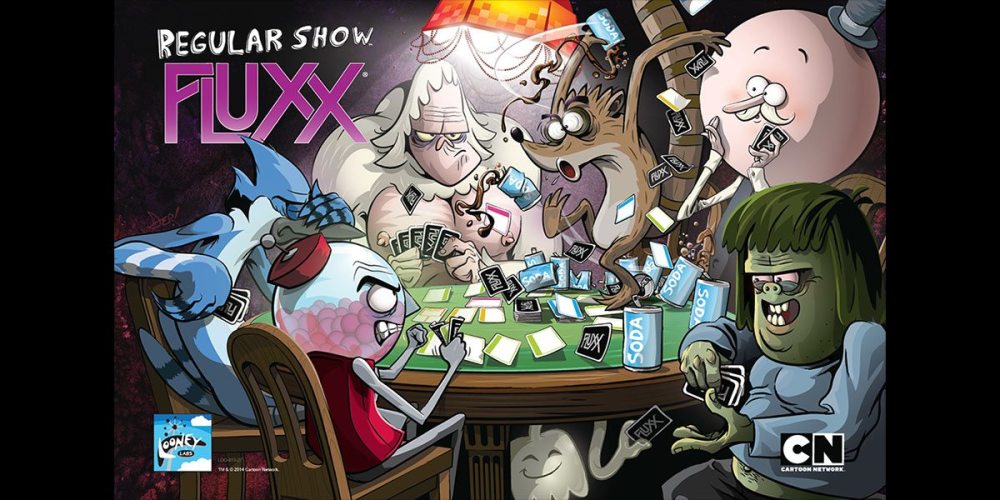 Overview: Looney Labs’ famous card game gets another installment, this time with the irregular cast of the Cartoon Network’s Regular Show.

Playing Time: 10 to 40 minutes (read on to learn why the time is spread so widely)

Fans of the show will undoubtedly enjoy playing with Mordecai, Rigby, and the whole gang, as will Fluxx afficianados and anyone looking for a quick-to-learn and quick-to-play light game. 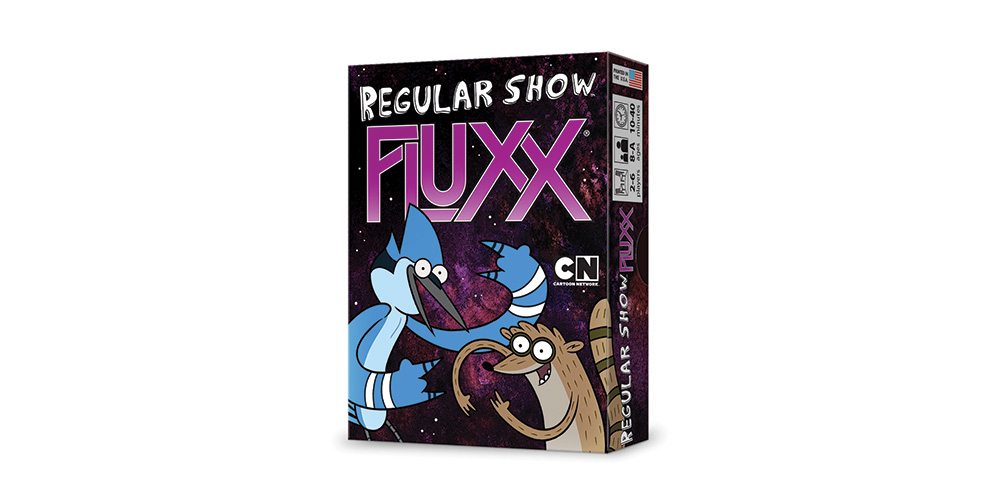 Like other games of Fluxx, the actions and rules are largely the same, but flavored with Regular Show language. The Keepers, Creepers, and Goals are all related to the surreal misadventures of a blue jay, a raccoon, and their friends. Gather your friends, because it’s anything but a train wreck.

Like all games of Fluxx, there are 100 standard-sized, regular-weight cards with the ubiquitous Fluxx logo on the back and color-coded borders on the playing side to make it easy to quickly identify the card. The illustrations all come from the show, so they’re fun and of “Eggsellent” quality.

Fluxx has been around for a while now and, if you’re familiar with the game, then you know how this version plays – pretty much the same as the others. The text of the cards ties in with the show and the Goals, Creepers, and Keepers are all themed to make it fun, but the rules are the same.

If you’ve never played Fluxx before, here’s an overview: shuffle the cards and deal three cards to each player. As the game begins, there is a single rule, “Draw 1, Play 1”, and on each players turn, they must follow the rule.

As play progresses, players may play New Rules that supersede or augment the existing ruleset. To that end, players must draw the number of cards required, play the number of cards required, discard to a certain hand limit (if required), and comply with a Keeper limit (if required). We were big fans of the “Cartoon Talk” rule, which allowed an extra card draw if we spoke with a cartoon character’s voice during the entire round, and “Yeahuh!”, which demanded we say “Yeahuh!” every time we played a Keeper (or an opponent wins the Keeper instead of the player playing the card). Yeahuh!

In addition to New Rules that can be played, a player can also play one of four other types of cards. There are Goals, which change the conditions required to win the game. Since play begins without a Goal, one must be played before someone can win. There are also Actions, which are used once and discarded. Actions dictate simple changes like drawing more cards or cause chaos by forcing a player to discard an entire hand.

Finally, there are Keepers and Creepers. Keepers are placed in front of a player and almost all Goals require some combination of Keepers, so the more you have, the better. Creepers are immediately placed in front of a player and prevent the player from winning (unless the Goal says otherwise). Regular Show Fluxx has two Creepers, a Bunch of Full-Grown Geese (they’re vicious and territorial!) and Destroyer of Worlds (In the name of all that’s holy, don’t connect the red wire to the blue wire!).

Players take turn playing their hand according to the current Rule(s) and try to gather Keepers, avoid Creepers, and fulfill the game’s current (but ever-changing) Goal. 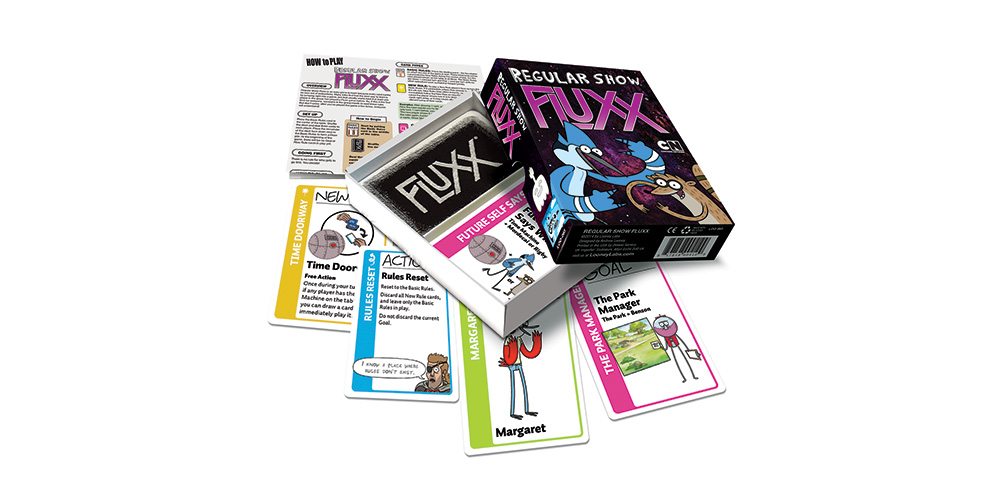 Fluxx can be a little difficult to track at first because the Rules and Goals are always changing. But that’s what I love about the game – no two plays are ever the same – and just when you think you’re going to win, the Goal changes. Because of the constant changes, games are unpredictable and can be won quickly or take a while to find a winner.

Yes, every release of Fluxx is largely just like every other; gameplay is nearly identical and rules and actions have little variance. But I don’t care. I keep adding Fluxx games to my collection because I think the game is great fun. There is just enough difference in each game to make it fun and the rebranding of each version adds enough humor and uniqueness to make it worth another purchase.

Episodes of Regular Show are in heavy rotation around our house, so we really had a blast playing, especially my kids. Drawing or playing certain cards led to a funny story about an episode or a line that always draws a laugh. We had so much fun that as soon as one game ended, we started another immediately. Again and again. Hummmmmmuusssssss!

Disclosure: GeekDad was sent a copy of this game.

Make a Cylon at Home