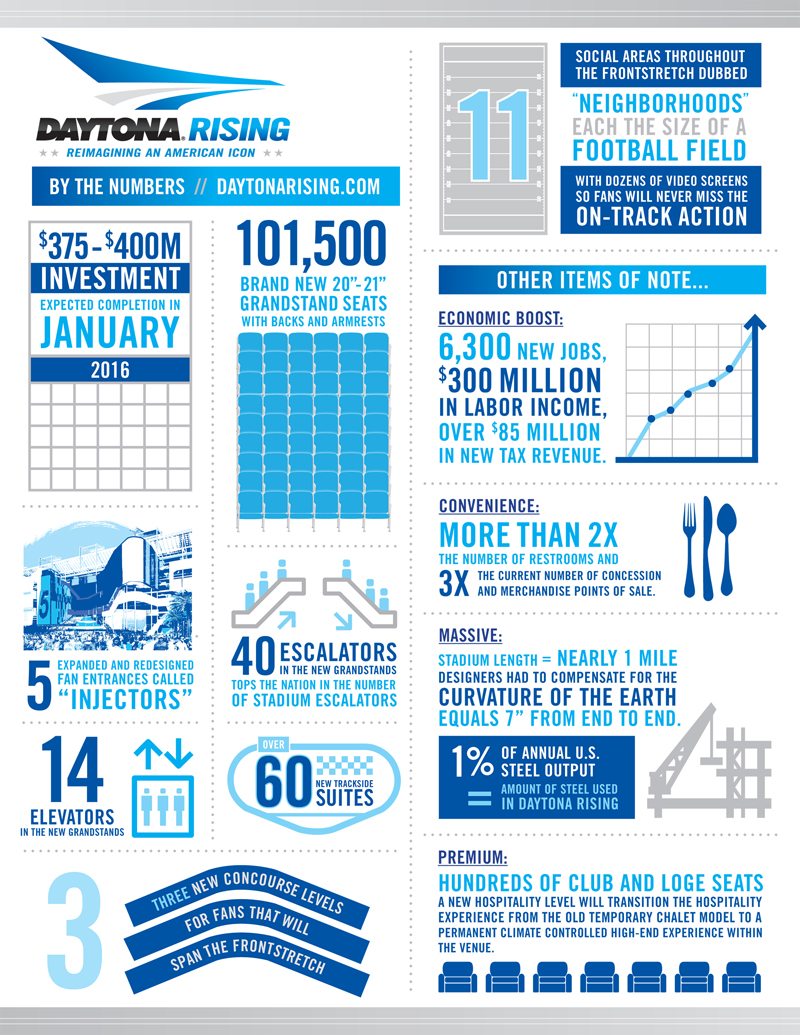 If there’s one word to describe the $400 million renovation of the stadium at Daytona International Speedway, it’s ambitious.

“The best way to predict the future is to create it,” said Joie Chitwood, President of Daytona International Speedway, which is the flagship motorsports facility of the International Speedway Corportation, headquartered across the street from the racetrack in Daytona Beach, Florida, that is the site for the world famous Daytona 500.

How massive is this project? You could fit fifteen new MetLife Stadiums inside it.

The project is ambitious in the scope of its modernization, which will make the experience far more comfortable for attendees, including the installation of additional and higher seating, new escalators, elevators, social areas, and a drip-free zone under the grandstands.

It’s also ambitious on the technical side, as the architect, Rossetti,  and the general contractor, Barton Malow, decided early in the planning stages to go all digital for this project, one of the first of its kind to do so.

And it’s ambitious in scope, as the Speedway hopes to become a tourist destination all on its own, that people will visit as a once-in-a-lifetime experience, much like how casual football fans sometimes attend the Superbowl for the spectacle of it all.

But, first, and possibly of most interest to GeekDad readers, is how technology has changed the way this project has been designed and built. I had a chance to visit not only the construction site, which is about one-third finished, but also received a behind-the-scenes look at the project earlier this month courtesy of the Daytona International Speedway.

In the normal course of any construction project, a master set of blueprints is created. This time, the blueprints went digital.

First, a 3D model of the current stadium was created with laser-scanning, according to Gregory T. Sweeney, the Director of Technical Design for Rossetti. The file size for this model is 125 gigabytes and it has its own dedicated hard drive.

Having exact data was especially necessary in the case of the speedway because it’s a unique design that isn’t comparable to any football or baseball stadium, Chitwood said.

The viewing experience at Daytona is better the higher the seats, which allows a view of the entire tri-oval. Plus, the stadium seating is centered not all the way around the track but near the finish line and pit row. And, as can be seen in the graphic above, the designers also had to compensate for the curvature of the Earth.

From that virtual model of the present, the design of the future was created. And those blueprints are instantly available to all the managers at the construction site via their iPads.

As changes are made, as they inevitably are when construction meets design, notes are placed on the blueprints to go to a certain page to read what’s been done. With the Daytona Rising project, those notes were turned into hyperlinks and are available at the click of a mouse or the tap of a finger, producing a real-time, easily accessible master copy for anyone who needs it.

The smartboards that are being used by the general contractor have been placed on old-fashioned wooden easels in the on-site headquarters, an interesting melding of the old and the new. The smartboards are all from SMART Technologies Inc. In the photo you can see the interactive flat panels on the tables and the interactive White Boards on the walls.

“Nothing about this is normal in the construction industry, nothing that’s paperless but in five years? This is where they will be,” said Len Moser, Vice President of Barton Malow,the general contractor for the Speedway project.

And those 19,500 tons of structural steel that’s being used for the project, including joints like the one below?

Each piece is electronically tagged, as are the other materials delivered to the site. With one check of their iPads, the on-site managers and the various subcontractors know exactly what’s available, what’s on time and what’s yet to delivered, and the status of each part of the project in real time.

So the master design, construction progress, the equipment available, and the crews on-site are all tracked electronically in real-time. This has allowed the project to stay on time, despite some weather delays. The western half, which was part of the site I toured, is scheduled to be completed next year, in time for the 2015 Daytona 500. The eastern half of the stadium will be built after that, from 2015-2016.

And the old suite tower, where I took the picture of the finish line? That will come down after the 2015 Daytona 500 and a new one will rise up for 2016.

“This is a once in a lifetime project,” Moser said.

Next article: what it will be like to enter this stadium of the future.

A New Contender For The Largest Lego Mosaic Ever 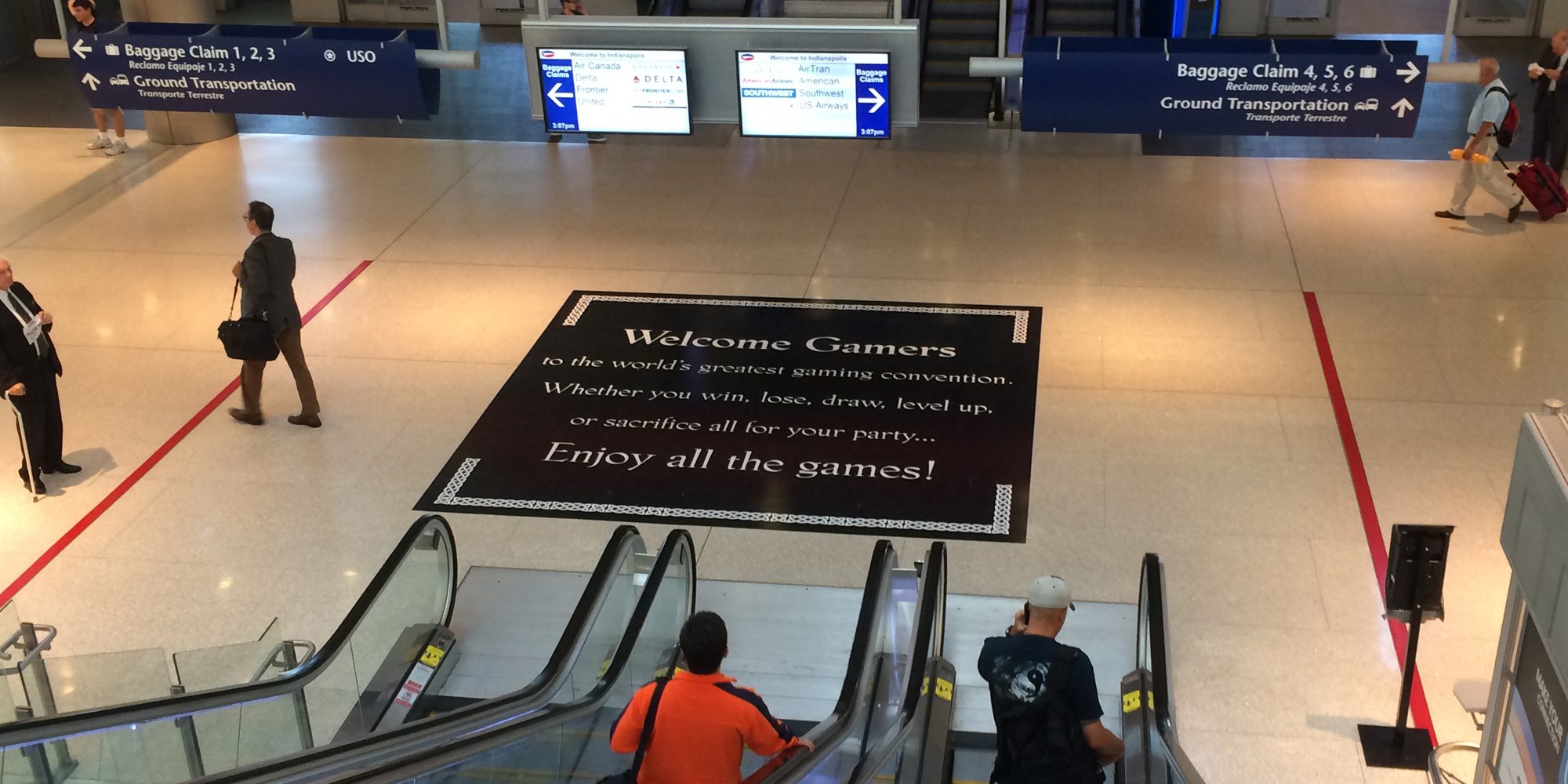 2 thoughts on “Predicting the Future: The New Daytona International Speedway”