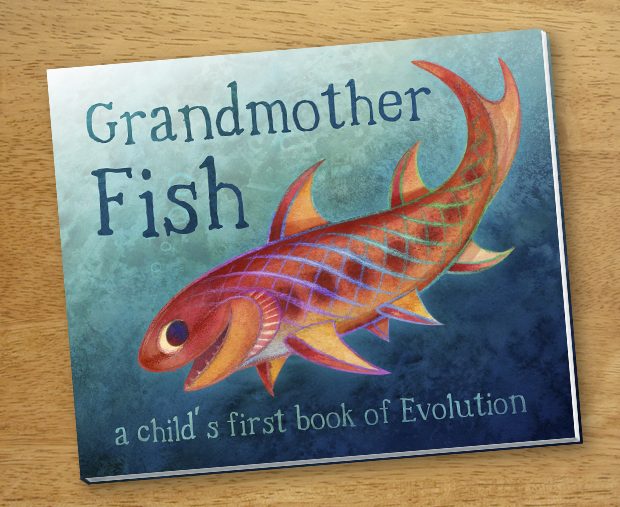 When I was in Seattle back in May, I got to see a lot of old friends, including many in the tabletop gaming industry. The last night I was there, we had a huge dinner right on the waterfront, and I got to catch up with Jonathan Tweet for a bit.

I’ve known Jonathan for decades. He’s a crackerjack tabletop roleplaying game designer who led the creation of Ars Magica, Everway, Over the Edge, and the third edition of Dungeons & Dragons (along with Monte Cook and Skip Williams). His latest game is 13th Age, which he developed with mutual friend Rob Heinsoo, who helped design the fourth edition of Dungeons & Dragons.

But that night, Jonathan had something special to show me: a preview of his children’s book about evolution, called Grandmother Fish. He had it on an iPad mini he passed around the table, and even in that rough form—which featured his stick figures rather than full illustrations—it grabbed each of us with its wisdom and its brilliance.

As Jonathan explained to me, creationists have all sorts of kids’ books to explain their stories about the way the world came to be. Scientists need one too, to help teach the concepts of evolution, and that’s what Grandmother Fish is meant to be.

Jonathan’s running a Kickstarter to fund the illustration and production of the book right now. It’s already racked up pledges of more than two and a half times its original goal, and they’re reaching for a final stretch goal to make a poster of the evolutionary family tree.

It’s an amazing book, but you don’t have to take my word for it. Click on the picture above, and you can read a full-color PDF draft of the book that’s even better than the one Jonathan showed at dinner that night.

And, hey, if you’re a creationist, Jonathan hasn’t forgotten about you. Just check out that $200 backer level. It gets you 10 copies of the book, plus a specially illustrated book of matches to help you burn them!

The Grandmother Fish Kickstarter drive ends at 8 PM CDT on June 22, so don’t waste any time. Get on over there and check it out now, before it’s too late to get in on the science-based fun!