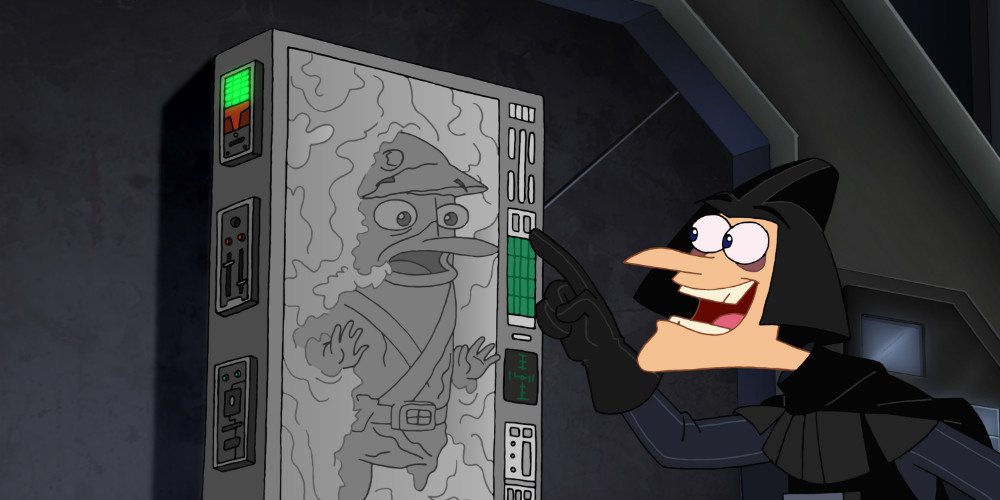 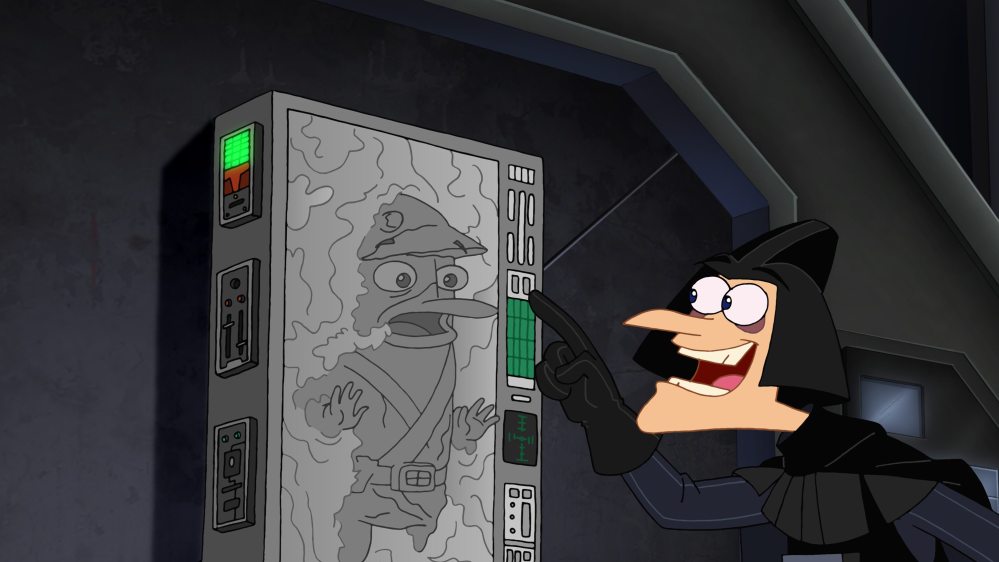 The brilliance of PaF:SW starts with the decision to, instead of rewriting the original story to fit the Phineas and Ferb characters, create a new story that takes place sometimes parallel to, and sometimes intersecting with, the original. I highly recommend showing your kids Episode IV before they see PaF:SW, preferably a couple of times, because the vast majority of the jokes depend upon the audience knowing that story already. Having seen Phineas and Ferb before is much less of a requirement, actually, though being familiar with how the characters typically interact and how the episodes are usually structured would help (so you won’t be surprised when they suddenly break into a musical number, for example). 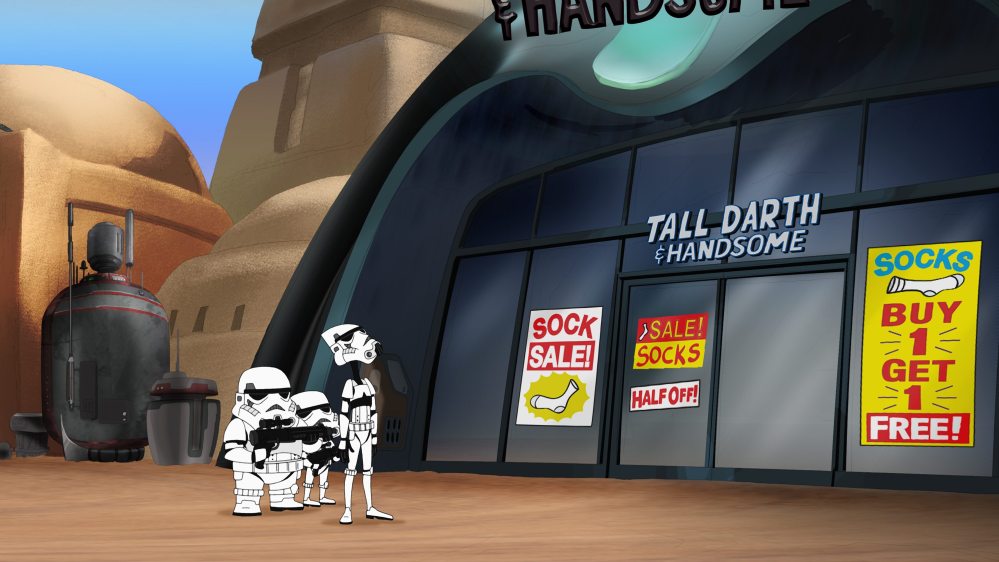 PaF:SW intelligently ends its opening crawl with a disclaimer that the TV special is not canon, which should help keep the Star Wars purists from becoming too outraged. Honestly, though, I’ve been a huge Star Wars geek since before the Empire struck back, and I think it would be pretty awesome if they did make PaF:SW canon. There are simply no wrong steps, which is more than I can say for a certain prequel trilogy that is canon.

The jokes come fast and furious, and you’ll likely need (and want) to watch it multiple times to catch them all – some of them are literally laugh-out-loud funny. From appearances by Boba Fett and the dianoga that grabs Luke, to a dig at Jar Jar Binks, there’s something for every Star Wars fan – they even included a scene that was filmed for the original movie but deleted, involving Luke wearing a goofy-looking hat and his unfortunate poncho. The animation is terrific, blending the traditional cartoony style of Phineas and Ferb with computer-rendered images, which really helps make you feel as though what you’re seeing really is taking place at the same time as the movie. The voice actors they got to do the main actors are excellent: the guy who does Luke’s voice absolutely aces his whininess, and the guy who does Han’s voice could fool Harrison Ford’s mother (were she still alive, that is). The always-great Simon Pegg does a great job as the voice of C3PO, and of course the voices of the usual Phineas and Ferb cast are great. 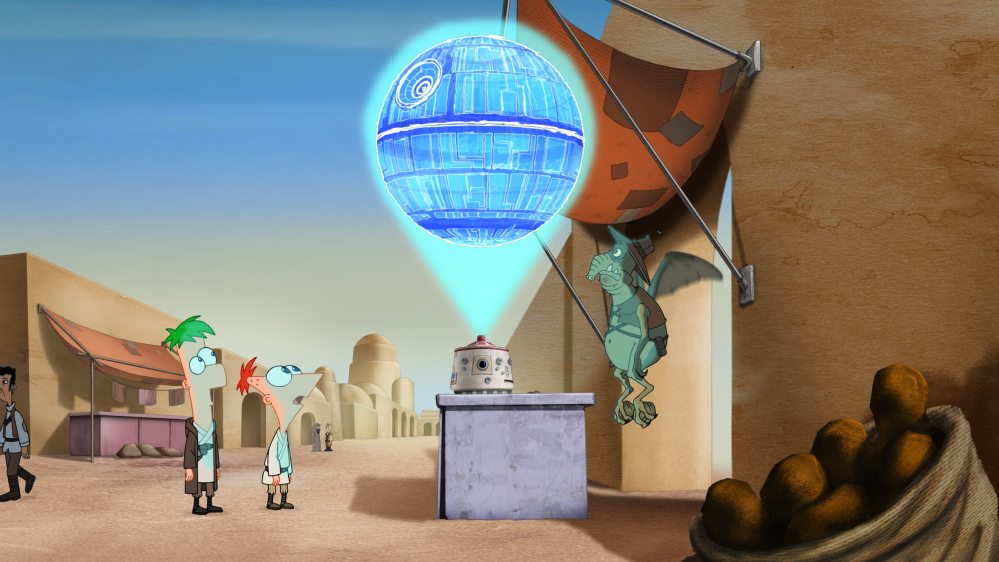 The usual PaF characters are all placed in roles appropriate for their usual personalities. Phineas and Ferb are brother, living on a moisture farm near Uncle Owen’s with their parents, except that unlike Luke they love Tatooine and have no desire to leave. Candace is the leader of a three-stormtrooper team, also consisting of Baljeet and Buford. Doctor Doofenshmirtz is now Darthenshmirtz, with his sidekick droid Norm, and acting pretty much like you’d expect. Perry the Rebelpus turns out to be the one who obtained the Death Star plans in the first place, and plays an important role later on as well (of course, he now works for Major Hologram). Best of all, Isabella is now a ship pilot and rival of Han Solo, flying her ship the Centennial Chihuahua.

Phineas and Ferb: Star Wars is one hour long, and airs on Disney Channel this Saturday, July 26, at 9:00pm ET/PT. It will be followed by an extended first look at the upcoming Star Wars Rebels animated series. If you have Disney XD On Demand or WATCH Disney Channel (on Apple TVs, for example), you can watch it right now.

Below you can view a clip from the special, exclusive to GeekDad! (In fact, the clip is of the part that references the deleted scene as mentioned above.) And check back tomorrow for excerpts from an interview with Dan Povenmire and Swampy Marsh, creators and executive producers of Phineas and Ferb. 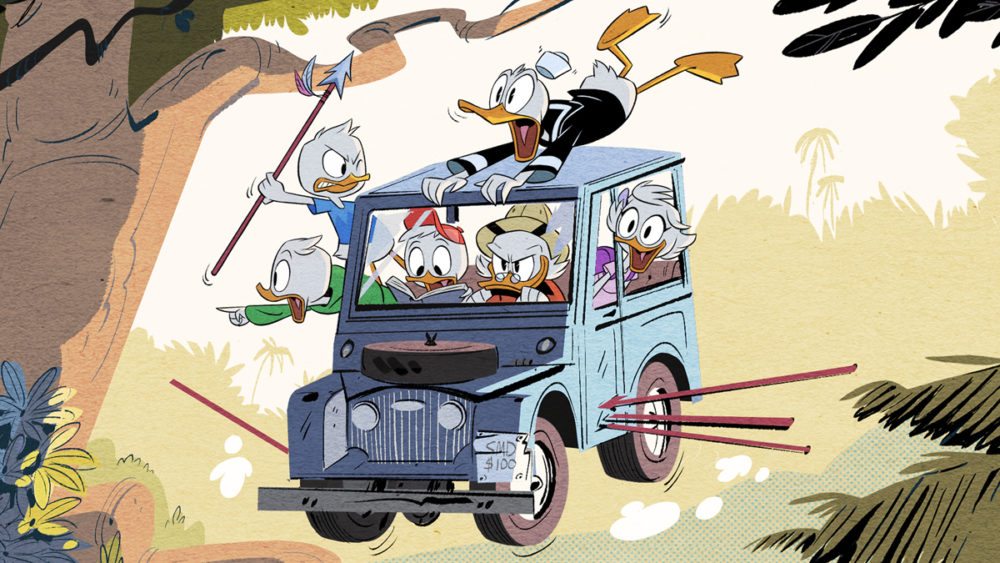