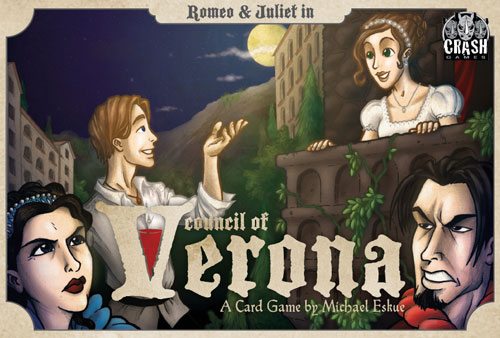 Crash Games, home of many a Kickstarter-funded campaign, produces a variety of games, all with very high quality materials. They take pride in their wood tokens, thick cardboard boxes, and sturdy cards and tiles. I’ve played several of their games, and my favorite would have to be Council of Verona.

Set in the world of William Shakespeare‘s Romeo and Juliet, Council of Verona is a light strategy game where 2-5 players can scheme and backstab and push their agenda in Italy on the cusp of the Renaissance.

There is very little luck to this game, where each player tries to meet their agenda(s) while hiding said agendas from the other players. Each of the cards is a character from Verona. Some are on the side of the Capulets and others are on the side of the Montagues. Still others are neutral, with one neutral card also counting as a Capulet, and another also counting as a Montague.

Once cards are dealt and chosen (the procedure for which varies by number of players), players take turns playing character cards on the Council or in Exile and placing influence tokens face down on the cards that have token spots. Some cards are action cards instead, which allow players to switch tokens, look at tokens, or move cards from Council to Exile or vice versa.

The game is relatively quick to play, and once you’ve played it through once, everyone should have a good idea of how the game works, and start devising strategies. The box says that it takes 15-60 minutes to play, but our games took much closer to the 15 minute mark. Perfect for a pick up game, or as a filler game when you’re waiting for others to finish longer games during game night. While the game is intended for people age 13 and up, kids slightly younger could play, but some of the subtleties might be lost on them. Still, there’s nothing inappropriate for children.

Council of Verona retails for $14.99, making it friendly to most budgets. For that price, too, there is a lot of depth, sophistication, and design quality. This game gives a real value in addition to being quite fun for a variety of tastes. Plus it’s a small and sturdy enough box to toss in your bag and play anywhere.

The GeekMoms Podcast #4 Skywalker Ranch and The Nerdist pilot